Alice Walker to be featured at Mississippi Book Festival 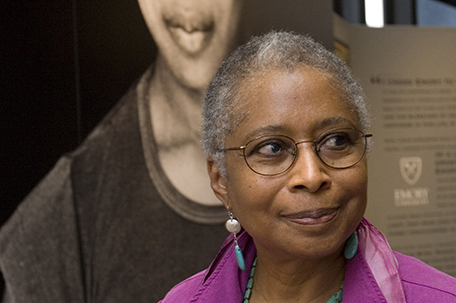 ABOVE PHOTO: Alice Walker stands in front of a picture of herself from 1974 as she tours her archives at Emory University, Thursday, April 23, 2009, in Atlanta. Emory University is unveiling the literary archives of the Pulitzer Prize-winning author for the first time since she donated the collection to the Atlanta school a year ago. (AP Photo/John Amis)

This year marks the 40th anniversary release of Walker’s acclaimed novel, “The Color Purple.” It was first published in 1982 and won the Pulitzer Prize for Fiction the following year.

“We are thrilled to have Alice Walker back in the city where she once lived and the place where her daughter was born,” said the event’s executive director, Ellen Daniels. “Her appearance will be a homecoming of sorts for her and we are honored that book lovers and festival-goers will have the opportunity to share in that moment.”

After two years of hosting the festival virtually, the free festival returns to the state capitol grounds in Jackson on Saturday, Aug. 20.

“After the past two years, we are all looking forward to being back together in person to celebrate literature at this year’s festival,” Daniels said.