Alex Aiono at The Electric Factory 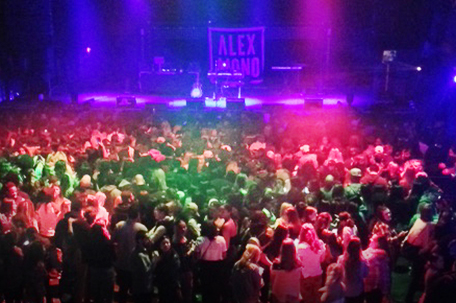 ABOVE PHOTO:  Crowds at the Alex Aiono concert at the Electric Factory Wednesday evening.

YouTube has become a never-ending source of talent in recent years. If used correctly, it can launch a music career — particularly for unsigned music artist. Singer, songwriter, and musician Alex Aiono is a true testament to the endless possibilities that come with perseverance. After racking in millions of views on YouTube with his unique renditions of cover songs, Aiono was signed to Interscope Records. Aiono is currently living his dream on a North American tour with former  X Factor Australia contestant and fellow YouTube artist William Singe. On Wednesday March 29th, Aiono gave his fans a night they will surely remember with a fifty minute performance at The Electric Factory in Philadelphia. 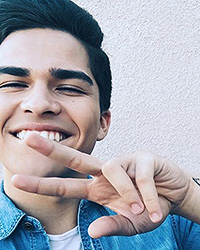 Aiono entered a dimly lit multicolored stage and was welcomed by a diverse, young crowd of screaming fans. Aiono took center wearing a sweatshirt, jeans, and sneakers with a mic in hand. The stage donned in an “Alex Aiono” banner was decorated with very little accoutrements — just a guitar, mic stand, computer and piano.

It was clear that the show would focus on Aiono solely. He opened with a cover of Tory Lanez “Say It”. The ladies went crazy every time he hit his falsetto. From the very first note, Aiono displayed high energy, he was engaging, and sincere in gratitude for the opportunity. Aiono was in great voice. He sounded like his recordings, which is no easy task  after traveling and performing in over thirty cities.

Aiono rounded out the remainder of his set with a combination of his most popular cover songs and originals. The cover songs included Rihanna’s “Kiss It Better”, Frank Ocean’s “Thinkin Bout You”, and Migos’ “Bad and Boujee”. He performed two new originals called “How Fine You Are” and “Mo Fire”. “How Fine You Are” quickly caught on with the crowd with the catchy hook “You make my ex girl jealous cause she knows that you’re better., you make my next girl mad and I ain’t even met her.” He also took time to slow things down picking up his guitar to serenade the crowd — a gesture that was greatly appreciated.

Aiono finished his set with his newest single “Work The Middle” and his most popular cover to date, Drake’s “One Dance” mashed with Nicky Jam’s “Hasta el Amanecer.” The show was enjoyable from start to finish, and with Aiono’s career just starting, the sky is the limit. Visit  http://www.alexaiono.com/ to check out the video for his newest single and to stay up to date with all things Alex Aiono.