After ‘When They See Us,’ social media comes for Central Park 5 prosecutor Linda Fairstein’s pocketbook 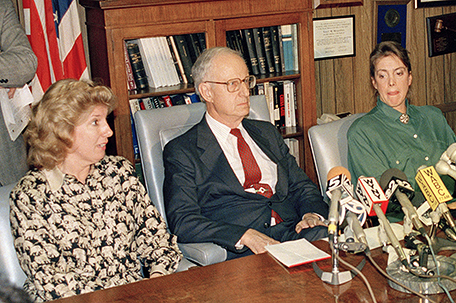 ABOVE PHOTO: In this March 26, 1988 file photo, prosecutor Linda Fairstein, left, is shown during a news conference in New York. Fairstein was the top Manhattan sex crimes prosecutor when five teenagers were wrongly charged with the 1989 rape and beating of a woman jogging in New York’s Central Park. Since the release of the Netflix series “When They See Us,” a miniseries that dramatizes the events surrounding the trial, she has resigned from at least two nonprofit boards as backlash from the case intensified. Seated at the table from left are Fairstein, District Attorney Robert Morgenthau, and Ellen Levin, whose daughter Jennifer Levin was murdered in 1986. (AP Photo/Charles Wenzelberg, File)

Linda Fairstein prosecuted the Central Park 5 even though she knew they were innocent.

Now that “When They See Us” has debuted on Netflix, the prosecuting attorney who sent the young men who were known as the Central Park 5 to prison has been taking so much social media heat that she’s shut down her Twitter account.

After the critically acclaimed biopic began airing on Netflix Friday, viewers were reminded of how Linda Fairstein, the former head of the Manhattan District Attorney’s Sex Crimes unit, prosecuted the case. In spite of some pretty flimsy evidence, she pushed the prosecutions through.

Once viewers saw that not only had Fairstein emerged unscathed from the case that ultimately exonerated the prisoners, but that she has also been thriving in her professional life, they got angry and took that anger to the one place that no one wants to run afoul of: the internet.

Fairstein retired from the Manhattan District Attorney’s Office in 2002, the same year that Kevin Richardson, Raymond Santana, Antron McCray, Yusef Salaam and Korey Wise were exonerated only because a fellow inmate came forward to confess. Not only has she gone on to become a best-selling novelist with book deals at both Simon and Schuster and Penguin Books, but was also a member of Vassar University’s Board of Trustees, until she was forced to resign on June 5.

In light of the release of “When They See Us,” the school in upstate New York is reviewing Fairstein’s status as a board member.

“Mari Robles, an international studies junior at Vassar, published a petition Sunday morning calling for Fairstein’s removal,” the Poughkeepsie Journal reported. “As of noon Monday, more than 2,700 people had signed the petition on change.org.”

Santana was in full supporting of TMZ called a “boycott” of Fairstein’s books and there were calls across social media for her publishing house to end its business relationship with her.

“Even if it’s 30 years later, she has to pay for her crime,” he told TMZ in a recent interview.

“Fans have taken to Instagram and other platforms, calling for retailers like Amazon and Barnes & Noble to remove Fairstein’s book collection from their shelves,” TMZ wrote.

The hashtag #Cancellindafairstein was one of the top trending topics on Twitter Monday morning, which folks on social media tagging Amazon and other places that sell Fairstein’s books in an appeal to them to stop helping an openly racist woman get rich after she knowingly ruined the lives of five innocent young people.

Though no official numbers have been released, at least one website put Fairstein’s net worth at $4 million.

As of Monday afternoon, Fairstein was still listed as a Vassar trustee on the college’s website. But that, along with her book contract, could ultimately be a thing of the past depending on whether decision-makers agree that rewarding Fairstein’s hate not should continue.