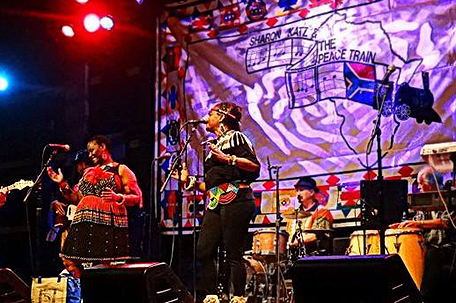 NEWTOWN, PA — The multi-cultural band of Sharon Katz & The Peace Train helped Nelson Mandela end apartheid in South Africa and have continued spreading their message ever since of peace and reconciliation through performances and workshops around the world.

The group is making headlines. A report about Sharon Katz & The Peace Train was scheduled to air on WHYY-TV’s “On Tour” on Thursday, Feb. 16 at 9 p.m.

WHYY-TV recorded The Peace Train at World Café Live in Philadelphia. The station’s website reads: “Singer and songwriter, Sharon Katz used her music as a tool for social change in South Africa. With her band, The Peace Train, she emphasized intercultural harmony and spiritual uplift. Her music helped lay the ‘groundwork for South Africa’s democratic uprising in 1994. Her ‘When Voices Meet’ project brought together 500-member multicultural youth choir, earning the respect and praise of Nelson Mandela himself.” The WHYY-TV report explores how music can bring cultures together in a peaceful harmony.

The spirited program at the college will start with the trailer to the documentary “When Voices Meet”, followed by a performance by Sharon Katz and her five-piece band presenting traditional South African songs. Katz lives in Philadelphia and Durdurban, South Africa. 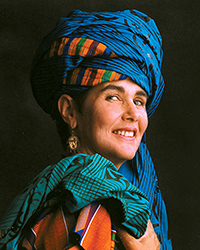 “This band has been Nelson Mandela’s cultural ambassador,” Katz said. “We travel with Mandela’s vision for a peaceful non-racial society.”

Katz and her group have traveled all over southern Africa, West Africa, Israel, Palestine. Panama and many other countries, but particularly all over America. “We’ve been to all of the states. We’ve been busy.

“I founded the project in 1992, which is a 25-year commitment to peace and unity through music,” she said.”

“The music is very relevant for the time we live in,” she said. “There’s division in the society in the United States. I would hope to see more unity with culture in all of our races and backgrounds.”

On stage, the musicians wear bright, colorful and traditional South African clothes, which are made by the Zulu people.

The band has also performed at women’s events and black history events at the BCCC.

“The audience always loves and dances to our music,” Katz said. “South American music has a very catchy beat – it’s a lot of fun. It’s electrifying.

“It’s a fusion of African, jazz, folk and funk,” she continued. “Funk just has a really good beat and you can dance to it. We give a lot of good positive messages in our music.”

Katz, who plays the electric guitar, sings with another vocalist in the group. There is a dancer, a drummer, a musician who plays keyboards and a bassist.

For tickets and/or to donate to the Sharon Katz & The Peace Train performance, please go to:

AAMBC is a non-profit organization, contributions are tax deductible under IRC section 170.