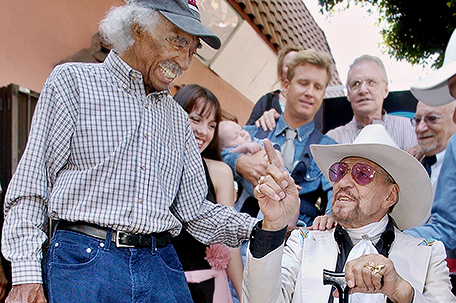 ABOVE PHOTO:   Herb Jeffries, a singing cowboy hero of the silver screen, right, is congratulated by jazz great Gerald Wilson following dedication ceremonies for Jeffries’ star on the Walk of Fame in the Hollywood section of Los Angeles, on his 93rd birthday in 2004.  Herb Jeffries, the first African-American singing cowboy to appear in movies in the 1930s, died of heart failure Sunday, May 25, 2014, at a Los Angeles hospital. He was 100.   (AP Photo/Reed Saxon, File)

LOS ANGELES — Herb Jeffries, the first African-American singing cowboy to appear in movies in the 1930s, died of heart failure Sunday morning at a Los Angeles hospital. He was 100.

His death was confirmed by Raymond Strait, who worked with Jeffries on his not-yet-published autobiography titled “Color of Love.”

Jeffries, who was born Umberto Valentino in Detroit in 1913 and was of Sicilian, Irish and Ethiopian decent, appeared as a horse-riding good guy with a thick mustache in a number of ‘30s westerns including “Harlem Rides the Range” and “Harlem on the Prairie,” a musical that featured an all-black cast that included actor Spencer Williams.

Jeffries was known for his luscious baritone. In the 1940s, he performed as a member of the Duke Ellington Orchestra and released his signature tune “Flamingo.” In 1941, he appeared in Ellington’s all-black musical revue “Jump for Joy” alongside Dorothy Dandridge in Los Angeles.

His popular solo hits “When the Swallows Come Back to Capistrano” and “Basin Street Blues” were released after he’d served in World War II.

Jeffries appeared in nine films and on television shows like “Hawaii Five-O” and has a star on the Hollywood Walk of Fame. He was inducted into the Western Performers Hall of Fame in 2004.

Strait said Jeffries recently had several surgeries that “just wore him out.” He added that Jeffries “believed in one world and one people and was one of the most generous people I’ve ever met. He was always funding something or doing something for kids.”

Jeffries is survived by his fifth wife, Savannah; three daughters; and two sons.