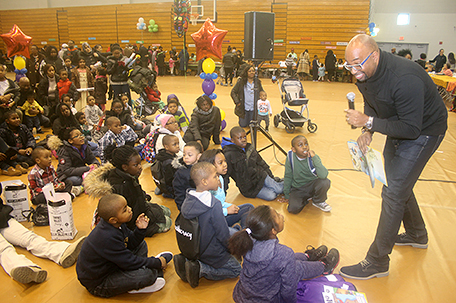 The African American Children’s Book Fair drew about 4,000 parents and children came to get their purchased books autographed by their favorite authors and/or illustrators; the so the energy was high at the Community College of Philadelphia, 1700 Spring Garden St. on Saturday, Feb. 4. Yet all waited patiently in the long lines.

For more than two hours, educators picked up learning materials at the “Our Educator’s Book Giveaway” for school libraries. Families stood in line for coloring books, posters and other freebies. Elected officials greeted greeting children who were sitting in drawing workshops, or spoke to parents carrying armloads of books waiting for the rows of cashiers to ring them up.

While the hours were long, the energy was high at the Children’s Book Fair.

“The message at each of these fairs is that African Americans do buy books for their children.  We often buy books at a great rate than others. The aftermath of this event after everyone has met the authors and met the illustrators is that they patiently wait in line to buy the books,” Lloyd-Sgambati said.

Among the authors and illustrators who consistently had a long line of children waiting to have their books signed was meteorologist Brittney Shipp. The former NBC-10 author of “The Meteorologist in Me” currently works for San Francisco’s KRON 4.

Ava Gardner of Southwest Philadelphia was among those who purchased Shipp’s book for her granddaughter, Avalise Brown. She said she made it a point to bring her to the fair to learn about her history.  “I believe in exposing her to not only books, but the authors who wrote them and the illustrators who did the artwork. There are so many good books here that she will enjoy reading, so I purchased many in different fields,” Gardner said.

Among the youngest authors was 7-year-old Munson Steed who penned the book, “Little Professor Sykes.” She is published by TaylorMade Publishing in Greenville, North Carolina. Her publisher, Diane Taylor, said that she has a roster of children’s books authors.

“People love to read a good story and it’s never too early to start writing,” said Taylor, who spent seven years as a journalist before transitioning to book publishing. “We have some books that are now in three languages. We also publish books by NFL players, but I love doing the children’s books.” 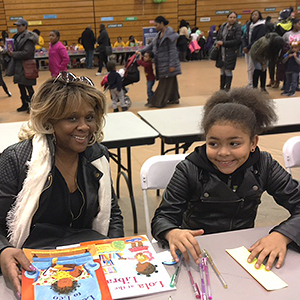 Kelly Starling Lyons, a native of Pittsburgh, brought her new book, “One More Dino on the Floor” to share with youngsters.  “I love to dance,” Lyons said. “It’s a story to show readers that they can dance or do anything that they really want to do.”

Sandra Richards signed copies of her book “Rice and Rocks.” This is dedicated to both her late nephew, Giovanni, and her Jamaican maternal roots. She said her nephew, who died of meningitis at the age of 8 in 2007, used to pick the pigeon peas out the rice her mother cooked on special occasions.

“He used to say he didn’t like these rocks and I found that hilarious,” Richard said. “That why though I have no children I love to be around my nieces and nephews and little cousins. Kids can be so funny because they see things through many filters that are just raw and pure. So, that is what I enjoy writing about.”

Tonya Bolden shared her children’s books that shows her love of history. Among them was “How to Build a Museum.” She also shared “Beautiful Moon” as well as her latest work, “Pathfinders: The Journey of Sixteen Black Souls.” Yet, for Bolden the love of history is something she acquired later in life. Now, she wants to make the subject exciting so young students will be more eager to learn about it.

“This is a collection of biographies of people who had big bold dreams. It was something I didn’t always see about history in books when I was growing up,” Bolden said. “What I love about history is that our cultural roots run deep. So, I write about Marian Anderson wearing a velvet or Rosa Parks sitting on the bus after work leading to a boycott, or Harriet Tubman’s lace shawls and handkerchiefs. It’s all historical.” 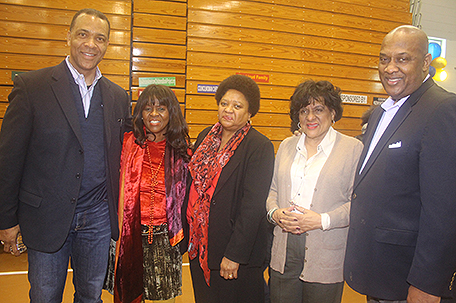 Yet there were many others who made the book fair a success. Sarah Stippich, who has worked at the Free Library of Philadelphia for 10 years, was on hand encouraging those present to update their library cards. “I am sharing the many children’s programs and literacy events that we provide for Philadelphia’s children,” she said.

Coordinating a workshop to bring the artist out in the children was illustrator Floyd Cooper. He readily encouraged children to draw on the large art pads he had at his table when he was showcasing his books earlier. “I like to show the children my technique of using erasers when I draw. It’s a technique that they pick up easily and enjoy,” Cooper said.

Among the volunteers were those from the Teenshop program, coordinated by former broadcaster Elleanor Jean Hendley. Volunteers like Tasha Samuels and Brittany Parish were sharing information about the mentoring program for girls. Hendley was also on hand to explain the initiative that has chapters throughout the city and even outside of Philadelphia.

Perhaps no one was more pleased with the event than Lloyd-Sgambati. Midway through the program, she took the microphone to thank all the exhaustive list of sponsors.

“We usually tell folks to get there early because the lines form before the events begins,” Lloyd-Sgambati said. “The fun-filled afternoon is packed with activities that promote the power and joy of reading. Authors and illustrators make presentations and sign their books. The Literary Row will distribute book-related promotional materials free of charge. In addition there will be a wide selection of affordable literature available for purchase. So, once again, it was a success.”