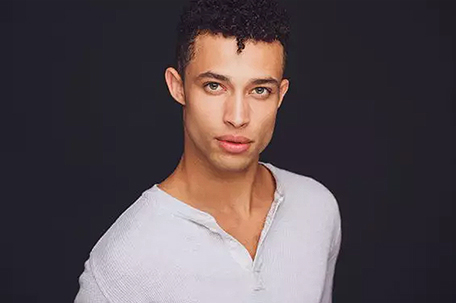 “Mean Girls,” which was inspired by the book “Queen Bees and Wannabes” by Rosalind Wiseman, highlights the hilarious and sometimes downright brutal dynamics of high school social hierarchy, as new student Cady Heron tries to navigate that unfamiliar territory.

The film also emphasizes the damaging effects that these class systems can have on teenage girls.

In 2017, the musical adaptation of “Mean Girls” opened at the National Theatre in Washington, D.C. It opened on Broadway the following year at the August Wilson Theatre on April 8, 2018.

With a great deal of success on Broadway and twelve Tony Awards nominations, “Mean Girls” went on the road with its first ever national tour, in September of this year. The next stop for the national tour is Philadelphia. Adante Carter, who stars as love interest Aaron Samuels, sat down with the SUN to discuss his experience with the show.

“I started with theater at a very young age… I’d say about 6 or 7,” he said. “I grew up watching the infamous “Cats” on VHS. My parents were like ‘he really likes that’ and I would be doing flips and trips, so they got me into gymnastics.”

“After that, I shifted over into performing. I just found out that I like being on stage and performing, so I guess I can say it was all triggered from “Cats”,” Carter added with a laugh.

During high school, Carter began working in community theater and going to see national tours of Broadway plays whenever possible. He made the official leap to pursue acting and theater professionally after seeing the national Broadway tour of “Hair” in 2011.

Carter moved to Los Angeles shortly thereafter, earning a BFA graduated from the American Musical and Dramatic Academy. The day after graduation, he began his first show, “Carrie the Musical.” Working steadily from that point on, Carter began his journey with the “Mean Girls” tour in August of this year.

“”Mean Girls” was a journey to get into,” he said. “There were so many call backs and auditions for the national tour. I believe I had a total of six or seven call backs. I had my very first audition for the tour in February, and I found out at the end of May that I had booked the job.”

Like many of us, Carter was a huge fan of the film before joining the cast of the Broadway production.

“”Mean Girls” is so iconic! The movie came out when I was in 4th or 5th grade and I ran the DVD until it had scratches on it,” he said. “I think I’ve seen it a hundred times, no exaggeration. It was weird because I thought, ‘is this what high school is going to be like?’ I thought I was really prepping myself for high school.”

“Mean Girls” has contributed so much to pop culture. In an effort to keep the material relevant, the “Mean Girls” team has added even more elements that resonate with audiences.

“All of those iconic moments are going to be in the show,” he said. “If you love the movie, you’re going to love the musical. The team — Tina Fey, her husband Jeff Richmond  —  who wrote the music and lyrics  —  Nell Benjamin, Casey Nicholaw… everyone did such a good job. Everyone came together and said how do we make this movie a musical and make it work, without making it too much of a parody.”

“They found that updating it and putting it into a modern context of 2019 really helps with that,” he continued. “We have social media incorporated into it, which didn’t exist in 2004 when the film came out. You can imagine how social media has affected high schools and how we view bullying. There are some huge social media moments where things spread like wildfire, and that’s very relatable to this generation and new “Mean Girls”  viewers.”

One of the highlights of the “Mean Girls” film was the diverse cast of faculty and students. Carter shared his excitement as a man of color, playing Cady Heron’s love interest Aaron Samuels.

“I’m very grateful and thankful to be playing the role,” he said. “First of all, being a person of color playing this role and rewriting the narrative is amazing. I love that there’s more fleshed-out moments for the character. I also love sharing the stage with our amazing female leads, Regina and Cady.”

“I think people are realizing that there are stories that need to be told and there’s relatability in everything… race doesn’t really matter,” Carter continued. “[It] especially shows that [they] are American and have the American experience in them. America is a diverse melting pot where we’ve all gone through similar experiences… there’s no need to cast it. You might reach a broader audience by casting a person of color as well. There’s someone in the audience that is going to relate to someone on that stage. Art is a reflection of society.”

At the heart of “Mean Girls,” is comedy as a direct reflection of real-life scenarios. Carter shared his enthusiasm about being part of the show.

“I enjoy being able to show up every day and laugh,” he said. “My job is to make people laugh, to listen to the audience respond to the jokes and to share this new generation of Mean Girls. I’m just so thankful to have a job where every day there’s laughter among the cast, the creatives and the audience as a shared theater experience.”

Carter offered his final thoughts on what audiences can take away from the show.

“Expect laughter! Another takeaway is that when someone is put into an unfamiliar situation, the best way to navigate that is by being your authentic self,” he said. “In high school, you go through that the first day of school just with who you’re going to sit with in the cafeteria. But you can experience that same feeling with a new job or meeting a new group of people… it’s applicable to so many situations. Don’t be who you think someone else wants.”

Follow Adante Carter’s journey on Instagram at: @adantecarter. “Mean Girls” will be at The Academy of Music Tuesday, November 19 through Sunday, December 1, 2019. Visit www.kimmelcenter.org for more information on tickets and showtimes.