Adamma and Adanne Ebo offer truth through satire in ‘Honk For Jesus. Save Your Soul.’ 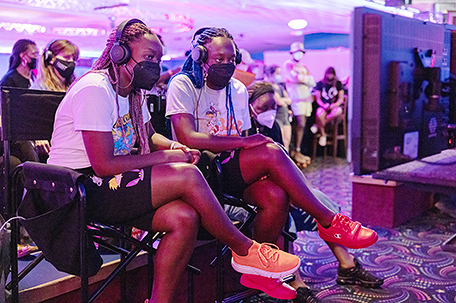 ABOVE PHOTO: Writer/director Adamma Ebo and producer Adanne Ebo on the set of their film HONK FOR JESUS. SAVE YOUR SOUL., a Focus Features release. (Credit: Steve Swisher / © 2021 Pinky Promise LLC)

The church has been a staple in the Black community for centuries, and church attendance is a long-held sacred tradition. In the Black church, the importance and reverence for the role of the pastor and first lady are at the forefront of the culture. But what happens when the pastor violates the sanctity of that role? What are the repercussions?

Twin sisters Adamma and Adanne Ebo explore some of those topics in their feature film debut, “Honk for Jesus. Save Your Soul.”  Written and directed by Adamma, produced by Adanne, and executive produced by Jordan Peele, “Honk for Jesus. Save Your Soul” premiered at Sundance in January 2022. The film is a dark comedy that centers around Trinitie Childs (Regina Hall), the first lady of a southern Baptist megachurch. Trinitie attempts to regain her lifestyle and rebuild her husband Lee-Curtis Childs’ (Sterling K. Brown) congregation after he is caught in a very public scandal. They attempt to restore everything to normal by having a team create an in-depth documentary about their lives. Adamma and Adanne spoke with the SUN about the important message behind this film.

Speaking up about the hypocrisy within the church, which occurs more often than it should, is often considered taboo. The Ebo sisters, who experienced Baptist and megachurch culture firsthand, are placing that conversation front and center in “Honk for Jesus. Save Your Soul.”

“I think it comes from our personal lived experience, growing up in the church southern Baptist in the height of megachurch culture in the early 2000s, and also [about] having this critical eye for what’s going on, as well as having this deep reverence for the community and the culture,” Adamma explained. “I think the fact that people feel like it’s taboo was the biggest push for us, because it’s something that absolutely shouldn’t be taboo and needs to be talked about.”

In the film, Trinitie and Lee-Curtis decide to not address the scandal publicly. Instead, they hire a film crew to create a documentary about their lives in the midst of the scandal — which begs the question — why?

“They’re also desperate,” Adamma added. “They’ve lost everything. This church is everything they’ve ever wanted to do or be. Their whole world is crumbling. They feel like if we can just get people to see us, we can get all of that back. I think they also believe Lee-Curtis is a prophet of sorts that has this extreme connection to a higher power. They truly believe in savable souls.”

In the film,  the Ebo sisters brilliantly use satire to craft and tell the story of Trinitie and Lee-Curtis’s road to redemption.

“Satire and comedy tend to be our sweet spot — that’s tonally what we like to create and consume,” Adanne said. “Also for us — particularly with this world and subject matter — what we wanted to talk about which was at the root of the story was probably better filtered through comedy. It’s the whole “spoon full of sugar helps the medicine go down” positioning it in a way that felt more palpable to people before kind of gut punching them with the reality.”

One reality addressed in the film is the fact that many Black churches have adopted the practice of turning their leaders into demigods that aren’t held accountable. “Honk for Jesus. Save Your Soul” shows how detrimental it can be when there is a shift in the focus from being a trustworthy spiritual leader, to a focus on public persona, wealth and appearances.

“One of the points and themes of the film is what happens when you deify regular people and how that can then trickle down into abuse in a multitude of ways — abuse of power, ultimately,” Adanne said. [It is also] why we then, after something like that happens, feel like we can’t critique what just happened. It’s because we’ve deified these human beings. It feels like they’re critiquing God, when they are in fact not God. It’s the hypocrisy that’s kind of astounding. We’re not asking churches to be perfect and we’re not asking the leaders of these institutions to be perfect. We’re asking for transparency one, accountability and if you’re going to say one thing, to walk the walk.”

“We personally feel like there is so much good and so much meaning that the church brings into people’s lives and for a lot of people into their souls, but they can be doing 100% better,” Adamma added. “Be doing the godly work if you’re going to purport to do that.”

While the first lady of the church is responsible for upholding and supporting the pastor’s work, very often the first lady gets pushed to the back burner. In “Honk for Jesus. Save Your Soul.” however, the story is told from Trinitie’s perspective.

“Trinitie is squarely the lead of this and that was important for us,” Adanne said. “Another element that we’re shining light on and critiquing [is the] women’s place in the church, particularly Black women and how that’s complicated when we’re expected to uphold our men, uphold our partner and stand beside him, no matter what, especially if he’s a prominent figure. We wanted to show what that does to women and how you yourself can devolve and deteriorate when you’re always looking out for someone else and not yourself.”

“Honk for Jesus. Save Your Soul.” is incredibly nuanced and takes audiences on a journey of emotions, largely due to the brilliance of Regina Hall and Sterling K. Brown’s performances.

“It was a dream! Regina was the archtype; it was always Regina — that’s who we wanted,” Adamma said. “They’re just so good. It’s true craft and truly a blessing. I tell people all the time, God brought this team together. There are no more perfect folks to embody these roles than Sterling and Regina. They both have incredible acting chops. Their range from the slapstick comedy, to the deeply dramatic — they can do it all and they do it all in this film. It was incredible to craft these performances with them.”

One of the most powerful scenes in the film showcases Trinitie’s character as a mime. This scene serves as a metaphor for the fact that Trinitie is repeatedly expected to put on a brave face for the public and hide how she actually feels for the sake of her husband.

“It’s about all these layers that she’s had to put on in order to in her mind get through this, to get to the other side and get past this,” Adamma said. “It was also a very specific nod to Black church culture… praise miming is a real thing. A lot of people that I talk to think I made it up. That specificity [within] our culture is equally strange, hilarious and beautiful. It’s about Trinitie putting on another front, another face and eventually, it gets too heavy. That’s the weightiest one — that’s the straw that broke the camel’s back.”

“Honk for Jesus. Save Your Soul.”  is a powerful story because it forces many of us to take an unfiltered look at religious institutions, our expectations of them and reexamine what they have indoctrinated us to believe.

Adanne urged audiences to “always ask questions, particularly of these types of institutions and to keep thinking critically.”

Be sure to follow and support Adamma and Adanne on social media @AdammaEbo and @AdanneEbo. To find out more about their upcoming projects and how to support them, be sure to visit their website at: www.ejimeproductions.com. “Honk for Jesus. Save Your Soul.” opens in theaters nationwide and will be available to stream on Peacock beginning September 2 — it’s a must see!