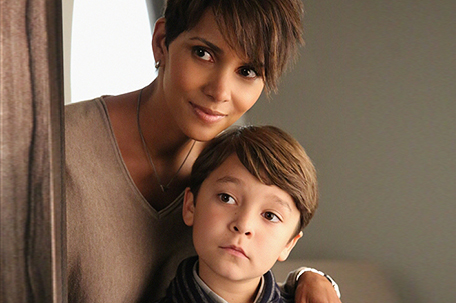 ABOVE PHOTO:  Halle Berry (as Molly Woods) and Pierce Gagnon as her son Ethan Woods in a scene from ‘Extant.’  (Photo: Robert Voets/CBS ©2014 CBS Broadcasting, Inc. All Rights Reserved)

Academy Award winner Halle Berry will star in “Extant,” a serialized drama from Steven Spielberg’s Amblin Television and CBS Television Studios. In August, the CBS Television Network announced a straight-to-series order for “Extant,” to be broadcast in summer 2014.

In a thrilling drama, Berry will play an astronaut who returns home from a year-long solo mission in space and tries to reconnect with her husband and son in their everyday life. Her experiences in space and home lead to events that ultimately will change the course of human history.

“There’s only one Halle Berry and we are incredibly honored that she has chosen ‘Extant’ to expand her illustrious career,” said Steven Spielberg. “As she does with everything she touches, she will bring a deep authenticity to her role and I very much look forward to working with her.”

“Halle is the type of award-winning actress you dream of collaborating with for an event project such as ‘Extant’,” said Nina Tassler, President, CBS Entertainment. “Her talent and ability to immerse herself into every performance has created memorable roles that have resonated with audiences everywhere. It’s a big coup for CBS to have Halle star in her first television series, especially with such an exciting original concept and a role layered with mystery and humanity.”

“I’m always on the lookout for amazing roles and when you see material that contains this strong of auspices, nuance and complexity it compels me to run toward it no matter the medium. For five months a year I’ll get to live with and play this incredibly intelligent and vulnerable woman, and for the remainder of the year I’ll continue to look for other roles that move me as deeply as this one,” said Halle Berry. “I’ve found amazing partners in CBS’s Nina Tassler and Les Moonves, and the incredible Steven Spielberg, along with his Amblin production team, whose vision and creativity in storytelling is unparalleled.”

In Berry’s interview with Yahoo, she discussed what it entails to play an astronaut. As she told it, it wasn’t much of an adjustment at all.

“There’s so many elements that drew me to [the character] but probably the first one [was] being a mother. This was a character, when I first read it, it was so relatable to me,” Berry said. “While I’m not an astronaut or a scientist — far, far from it — I still had an understanding about the human quality to this woman.

“At the end of the day this is really a human story about people,” she said. “The fact that she’s a scientist becomes a little bit irrelevant pretty fast.”

Likewise, playing pregnant — even pregnant with a creature of unknown origin — wasn’t too much of a leap for Berry, who was eight and a half months along with her second child when the series was pitched to her.

In addition to ‘Extant’, Berry and her producing partner, Elaine Goldsmith-Thomas, have entered into a two-year, first look production deal with CBS Television Studios.

Berry won an Oscar in 2002 for her starring role in Monster’s Ball. Her additional feature film credits include playing Storm in the X-Men franchise, including the seventh installment, X-Men: Days of Future Past, released earlier this year and she also starred in the James Bond film Die Another Day, as Jinx. Berry started this year starring in the successful feature film thriller, The Call, for Sony/Screen Gems. Berry’s successes on television include her critically acclaimed and award winning role in HBO’s movie, “Introducing Dorothy Dandridge,” which earned her an Emmy, a Golden Globe and a SAG Award and her critically praised performance starring in the Oprah Winfrey produced “Their Eyes Were Watching God,” which earned her both an Emmy and Golden Globe Award nominations. 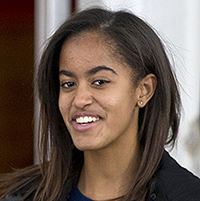 Just weeks away from turning 15, President Barack Obama’s eldest daughter is already working on her dreams.

According to The Wrap, Malia Obama spent a day on the set of Halle Berry’s new CBS series “Extant” working as a production assistant.

She even helped the director slate a take on the show that follows Molly (Berry), an astronaut who returns home to learn that her experiences in space will alter her experience on Earth — along with those of every other human being.

How Malia got the gig or whether she plans to return are yet to be determined.