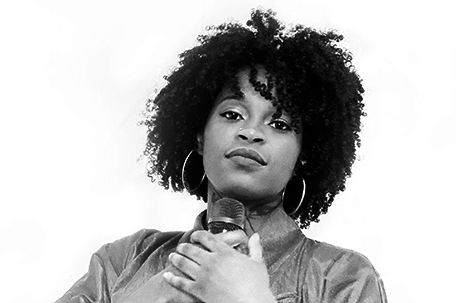 Hailing from Harlem, NY, 21-year-old Just Sam was busking on the subways of New York and singing car to car before she found herself auditioning for American Idol.

At the tender age of six, Just Sam was adopted by her grandmother, Elizabeth, with whom she shares an unbreakable bond.

Knowing she had a passion for music and wanting to help her grandmother pay the bills, Just Sam started busking in middle school and ultimately found her calling as a versatile chanteuse. Growing up a tomboy, Sam frequently changed her style. So much so that in high school, her classmates didn’t know how to categorize her. She wasn’t a girl, she wasn’t a boy, she was Just Sam.

Throughout the season, Just Sam has shown both her vulnerability and fearlessness in her songs and interviews.

Her soaring emotional dedications to her grandmother, such as “Believe” (American Idol alumnus Fantasia) left nary a dry eye, while surprise choices like “Como La Flor” (Selena Quintanilla) demonstrated her fearless metamorphosis into a superstar. In her finale moment, singing a heartfelt rendition of “Rise Up” (Andra Day), Just Sam rose to the top and took the crown.

Just Sam’s song, “Rise Up,” is available now wherever you stream music.

OWN, Oprah and Tyler strike deal for exclusive partnership