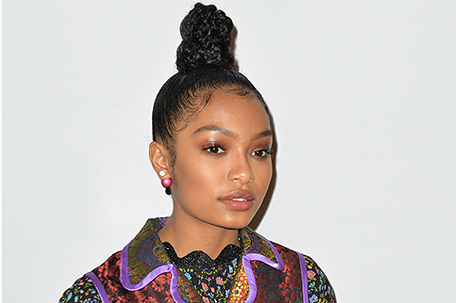 Kenya Barris has had a tremendous last 24 months in terms of all the high profile projects (both film and TV) he’ is involved with thanks in large part to the critical and commercial success of his hit ABC comedy series “Black-ish,” which is now in its 3rd year and continues to perform well for the network.

Most recently, co-star Tracee Ellis Ross picked up a Golden Globe award for best actress in a comedy series earlier this month.

Reported this evening by Deadline, ABC is considering spinning off “Black-Ish” with series creator/executive producer Kenya Barris and ABC Studios working together on the potential project, which would star Yara Shahidi, focusing on her character, oldest child Zoey Johnson, who goes off to college.

Zoey Johnson, Dre (Anderson) and Rainbow’s (Ross) 17-year-old daughter is the popular, entitled, stylish, and socially active member of the Johnson family. She is typically apathetic to any dealings with her family and is treated as the most perfect teenager, despite her generally shallow personality.

Talks on the potential spin-off are still in very early stages, but audiences may be introduced to the idea via a backdoor pilot episode of “Black-ish” that will air in the spring.

But for a series that some have called a 21st century version of “The Cosby Show,” a spin-off that’s centered around a daughter who goes off to college, certainly feels apropos here.

In December 2014, Shahidi won an NAACP Image Award in the category of Best Supporting Actress in a Comedy. And last year, she signed with New York’s Women Management modeling agency.

Her past credits include playing a young Olivia Pope for two episodes of “Scandal,” and on the big screen, alongside Tyler Perry in “Alex Cross.”

As for Barris, in addition to his work on “Black-Ish,” earlier this week, it was announced that he’s developing a remake of the 1992 film “White Men Can’t Jump”; he also has remakes of “Shaft,” a big screen adaptation of “Good Times” and much more.

Deadline was first to report the news of the possible “Black-Ish” spin-off.