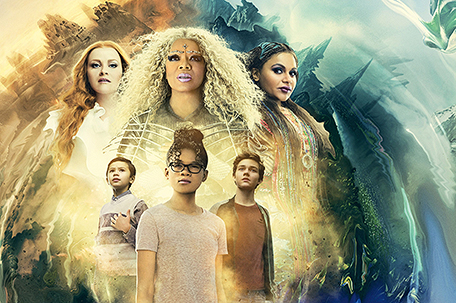 Madeleine L’Engle finished writing “A Wrinkle in Time” in 1960, but the escapist fantasy was rejected by over two dozen publishers before it finally captured the imagination of John Farrar, co-founder of Farrar, Straus and Giroux. In 1963, the groundbreaking, illustrated novel won the Newbery Medal for being the best children’s book of the year.

Four decades later, Disney eviscerated the magical masterpiece of its religious overtones in the process of turning it into a generic, made-for-TV kiddie movie devoid of allusions to Christianity. Even the author expressed her displeasure with the sanitized production, remarking, “ I expected it to be bad, and it is.” You see, L’Engle, the longtime writer-in-residence at the Cathedral of St. John the Divine in New York City, had consciously laced the opus with lots of Biblical quotations.

Fast-forward 15 years, and we now find Disney mounting a big screen version of the beloved classic many consider unfilmable. That unenviable task fell to Ava DuVernay, director of “Selma” and the Oscar-nominated documentary, “The 13th.”

DuVernay availed herself of state-of-the-art technology to create an eye-popping spectacular designed to enthrall young and old alike. She also cast the message movie in a “colorblind” fashion.

The original ensemble only had a single, non-White member, Alfre Woodard. Compare that to the reboot, which features an ethnic rainbow reflective of the direction in which the browning nation has been rapidly heading. Though the film has its spiritual moments, they are more universal in nature as opposed to pushing a Christian agenda.

The basic plotline sounds anything but faith-based. In 25 words or less, the story is about a brother (Deric McCabe), sister (Storm Reid) and friend (Levi Miller) who time-travel to distant universes with the help of a trio of astral travelers played by Oprah Winfrey, Mindy Kaling and Reese Witherspoon.

The kids are searching for the siblings’ scientist father (Chris Pine) who went missing several years earlier. Along the way, they learn some big life lessons about what really matters in life.

An overblown, intergalactic saga certain to tug at your heartstrings during unapologetically-sentimental breaks in the action..

To see a trailer for A Wrinkle in Time here.