A theme of tolerance, inclusion at this year’s Tony Awards tolerance 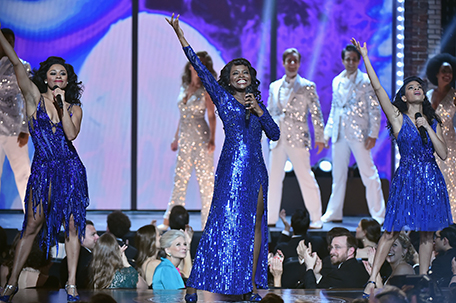 ABOVE PHOTO: LaChanze and the cast of “Summer: The Donna Summer Musical” perform onstage during the 72nd Annual Tony Awards at Radio City Music Hall on June 10, 2018 in New York City. (Photo by Theo Wargo/Getty Images for Tony Awards Productions)

NEW YORK — A small-scale, intimate musical about hard-won cultural understanding was an altogether apt Tony winner on a night where tolerance and inclusion were constant themes.

“The Band’s Visit,” about an Egyptian police band that gets stranded in a remote Israeli desert town, forcing both sides to get to know each other, triumphed over much flashier shows to win best musical Sunday night — and a total of 10 awards. The closest runner-up, with six, was the blockbuster London import “Harry Potter and the Cursed Child,” which won best play. 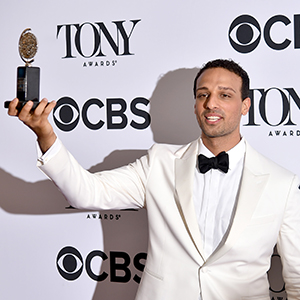 NEW YORK, NY – JUNE 10: Ari’el Stachel, winner of the award for Best Performance by an Actor in a Featured Role in a Musical for “The Band’s Visit,” poses in the 72nd Annual Tony Awards Media Room at 3 West Club on June 10, 2018 in New York City. (Photo by Mike Coppola/Getty Images for Tony Awards Productions)

One by one, the winners of “The Band’s Visit” referenced the show’s themes of acceptance and finding a common humanity. Tony Shalhoub, named best actor in a musical, spoke of his father’s arrival at Ellis Island from Lebanon in 1920. “May we, their descendants, never lose sight of what they taught us,” he said. Ari’el Stachel, who won for best featured actor, praised the show for “telling a small story about Arabs and Israelis getting along, at a time that we need that more than ever.” Addressing his parents in the audience, Stachel, whose father was born in Israel, confessed that “for so many years of my life I pretended I was not a Middle Eastern person.”

The show also won awards for its luminous lead actress, Katrina Lenk, and its director, book and score, among others. Producer Orin Wolf said the message was one of unity, in a world that “more and more seems bent on amplifying our differences.”

Composer David Yazbek, speaking later at the Tony after-party, said the show had special resonance amid “the climate of divisiveness that we’re seeing.” The show isn’t just about Jews and Arabs, he said, “It’s about any tribes that have figured out reasons to be at odds with each other.” 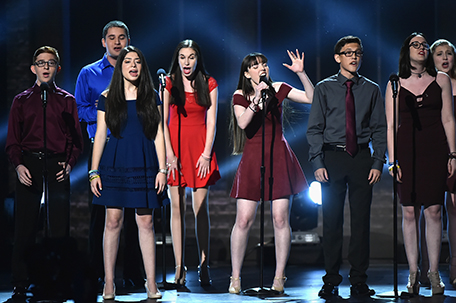 The Middle East conflict, immigration, LGBT equality, gun control — many social issues came up, explicitly or implicitly, during the ceremony, which was hosted with a light (and musical) touch by Sara Bareilles and Josh Groban. The night’s first big winner, Andrew Garfield, best actor in a play for “Angels in America,” earned hearty cheers when he declared, “Let’s just bake a cake for everyone who wants a cake to be baked.” He was referring to last week’s Supreme Court decision in favor of a Colorado baker who refused to bake a wedding cake for a same-sex couple because of religious objections.

Lindsay Mendez of “Carousel,” named best featured actress in a musical, tearfully recalled that early in her career, “I was told to change my last name from ‘Mendez’ to ‘Matthews,’ or I wouldn’t work.” She went on to say: “To all of you artists out there, just be your true self and the world will take note.” In other acting awards, Nathan Lane won his third Tony — his first in a dramatic role — for playing Roy Cohn in “Angels in America.” Glenda Jackson, 82, won best actress in a play for her fiery portrayal of an elderly woman in “Three Tall Women,” and her co-star, Laurie Metcalf, won featured actress.

While there was clearly an undercurrent of resistance to the current administration in Washington, winners did not overtly attack President Donald Trump. Then came Robert De Niro, who arrived to present the most anticipated moment of the night — a performance by Bruce Springsteen — and began by launching an expletive at the president, pumping his arms for emphasis. And then he did it again. Many in the audience stood and cheered, while TV censors quickly bleeped out the offending words. 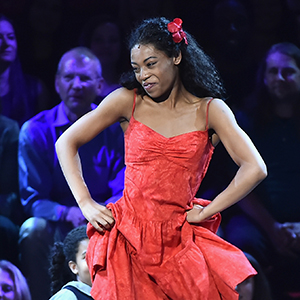 The cast of Once on This Island performs onstage during the 72nd Annual Tony Awards at Radio City Music Hall on June 10, 2018 in New York City. (Photo by Theo Wargo/Getty Images for Tony Awards Productions)

“That was the best part of the whole evening!” commented actor John Leguizamo later that night at the Plaza Hotel after-party. “I jumped to my feet.” He added that “the Tonys have never been this political.” Leguizamo himself, accepting a special Tony, brought up the fate of immigrant children in detention centers and the deaths of thousands of Puerto Ricans in Hurricane Maria. He also declared, “I’m an immigrant, and I’m not an animal” — referring to Trump’s recent remarks that some people living in a country illegally or without legal permission are “animals.”

Several winners noted that elections are coming in November — among them playwright Tony Kushner, who wrote “Angels in America,” which won best revival of a play. He told viewers they have “21 weeks to save our democracy and heal our planet.” (On a lighter note, he also gave a shout-out to Judy Garland’s birthday.) Best musical revival went to “Once on This Island,” in a surprise win over “My Fair Lady” and “Carousel.”

By far the most emotional moment of the evening evoked the nation’s divisions over gun reform, when Melody Herzfeld, drama teacher at Marjory Stoneman Douglas High School in Parkland, Florida, was honored from the Tony stage. Herzfeld, the one-woman drama department at the school, has been credited with saving lives by barricading students into a classroom closet during the Valentine’s Day mass shooting that killed 17 people. She later encouraged many of her pupils to lead the nationwide movement for gun reform.

Herzfeld spoke during the pre-show. But later, students in her drama department surprised the audience by appearing onstage to sing “Seasons of Love” from the musical “Rent.”

They got the biggest ovation of the night.