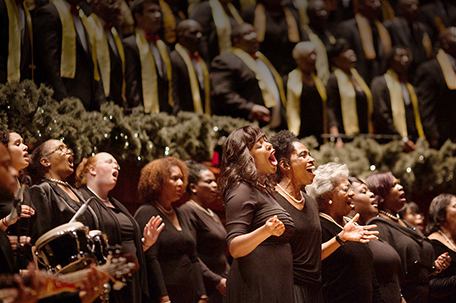 Each year “A Soulful Christmas” honors a pioneer in the music world. This year, legendary gospel singer and songwriter Dottie Peoples was the honoree.

The evening began with a Christmas medley arranged and played by Marvin Mills, followed by welcome remarks by Anne Ewers, president and CEO of the Kimmel Center. Rev. Dr. Darron McKinney, senior pastor of Bright Hope Baptist Church, offered the opening prayer, telling the audience, “come, even if you don’t stay long.”

The first vocal performance was a beautiful rendition of “Let All Mortal Flesh Keep Silence” performed by mezzo-soprano Crystal Charles.

The true beauty of the “Soulful Christmas” experience was the wide array of genres in the performances that were showcased.

The Gospel Music Preservation Alliance was the first choir to perform. Rev. Dr. Albert Morgan offered Christmas reflections before introducing the choir. Under the direction of Karen M. Hines,  the group performed “He Reigns” by Vincent Bohanan — an up-tempo number complete with tambourines and in sync clapping.

Rev. Dr. Donald D. Moore, pastor of Mount Carmel Baptist Church, reminded the audience to focus on joy rather than happiness, reinforcing that happiness is based on one’s condition, while joy is a choice rooted in hope. Soloist Chanel Randolph led the Mount Carmel Baptist Church Combined Choir in singing “He Has Come,” composed by Norman Hutchins. Before the next performance, Rev. Dr. Jessica Kendall Ingram introduced Rev. Dr. Mark Kelly Tyler, pastor of Mother Bethel African Methodist Episcopal Church. Tyler offered Christmas reflections. He spoke to the audience about the difficulty the holiday season can bring and the fact that the illusion of being alone is just that, for God is with us always. The Mother Bethel African Methodist Episcopal Church Mass Choir delivered a dynamic operatic performance of “Hallelujah: Hallelujah Is the Highest Praise”, arranged by Patrick Lundy. The arrangements provided by the house band involved complex arrangements, particularly on the piano, and showcased the choir’s impressive range and synchronized choreography.

The lights were dimmed as the Enon Tabernacle Baptist Church Mass Choir took the stage. Rev. Blane J. Newberry, associate pastor of exaltation, quoted Psalm 34:8, stating “Oh, taste and see that the Lord is good.” The choir performed “Hallelujah Glory”, composed by Gregory Person and arranged by Garland Waller, which featured soloist Jacqueline Spraggins. Rev. Glen Spaulding, senior pastor of Deliverance Evangelistic Church, energetically told the audience that praise is a weapon in the spirit, urging everyone to “Rejoice always, and again I say rejoice” (Philippians 4:4). The Deliverance Evangelistic Church Mass Choir sang “Rejoice! Let’s Give Him Praise”, composed by Alex Ingram (minister of music) with Michael Thompson as the featured soloist. Father Christopher Walsh, pastor of Saint Raymond of Penafort Catholic Church, offered encouragement for us all to stand firm in our faith as we “make it down the mountain” (i.e., our own individual obstacles and hardships).  Soloist Paula Holloway brought the audience to their feet as she led the Philadelphia Catholic Gospel Mass Choir in singing Kurt Carr’s “For Every Mountain.” Dr. Rollo Dilworth, rounded out the second section of the program as he conducted The Philadelphia Heritage Chorale Youth Division in singing “Christmas Time”, composed by David Curry.

After a brief intermission, the audience returned to see the entire stage decorated in a variety of African cloths, with the members from all of the choirs painting a sea of colors. Marietta Simpson spoke about African pride, African sacred concepts and “Merging the Essence of the African Diaspora in American Culture.” Led by conductor Dr. J. Donald Dumpson, The Philadelphia Heritage Chorale performed an incredibly complex, ethereal piece entitled “Shout For Joy”, composed by Adolphus Hailstorm. After a wonderfully moving performance, Councilwoman Blondell Reynolds Brown and Councilwoman Cherelle L. Parker presented citations to the legendary Dottie Peoples. With over 30 years in the music business and a body of music that continues to bless generations, Dottie Peoples was presented with the “Lifetime Achievement Award In Sacred Music” by Dumpson on behalf of Gov. Tom Wolf, Mayor Jim Kenney, and the City Council of Philadelphia. Peoples graciously accepted the well-deserved honor, but didn’t waste time before stating that she was ready to sing. Peoples performed two of her most well known songs, “Testify” and “On Time God”. The audience sang along, standing and dancing along with Peoples during the exuberant performance. Parallel to the lyrics in “Testify,” and “For God I Live, For God I Die.” Peoples shared a personal testimony of God sparing her life after being hit by a tractor trailer.

The night of music ended with a “Finale of Lights”. The audience became illuminated with a sea of blue lights (distributed prior to the concert), as the combined choirs sang Dr. J. Donald Dumpson’s arrangement of  “Silent Night.” The final song “Your Great Name”, composed by Todd Dulaney, featured soloist Rodney Harris. The Soulful Citywide Praise Dancers (coordinated by Tara Bligen), donned in all white, moved down the aisles gracefully waving flags in a variety of colors. The rainbow effect was amplified by additional dancers in the balcony performing the same choreography. The Universal African Dance and Drum Ensemble joined the combined choirs on stage, with drummers and stilt walkers as the audience participated in a call and response of “When I call your name!”. Rev. Marshall Mitchell of Salem Baptist Church of Roslyn gave the benediction, ending a night of phenomenal performances.

“A Soulful Christmas” was a night to remember — one filled with peace, incredible musicianship and an appreciation for the vast diversity that music in the African diaspora offers. To find out more about next year’s “A Soulful Christmas” and additional concerts taking place during the holiday season and beyond, visit www.kimmelcenter.org.