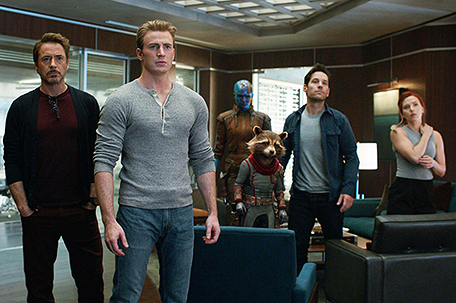 With  ‘Avengers: Endgame’, the Marvel Cinematic Universe (MCU) ends one era, and begins another.

“Avengers: Endgame” was the moment that just about every comic book geek in America was waiting for.

From the moment that Thanos (Josh Brolin) put on the Infinity Gauntlet and snapped half of the world (and a lot of your favorite Avengers) out of existence in “Avengers: Infinity War,” fans have been waiting to see how what remained of Earth’s Mightiest Heroes have been handling things since then.

As it turns out, it depends on which Avengers you’re talking about.

The film begins not too long after the Thanos Snap. Tony Stark (Robert Downey Jr.) and Nebula (Karen Gilliam) continuing to float around in space, which is where they were after their encounter with Thanos. Captain Marvel (Brie Larson) brings our space bound heroes home, but it’s not necessarily a happy reunion. Tony’s a bit frayed, and a lot angry, especially with Captain America (Chris Evans), who wasn’t there when Thanos hit him with a planet.

When Nebula tells the remaining heroes where Thanos is, they go after him hoping to get the Infinity Gauntlet and undo his damage. But Thanos has used it again to destroy the stones, which nearly killed him. When Thor (Chris Hemsworth) chops his head off, restoring the world looks kind of hopeless.

The film then moves five years forward and Banner has managed to integrate the Hulk into his everyday life, turning into a Hulk that shops at the Big and Tall stores and doesn’t spend as much time smashing things. Black Widow (Scarlett Johansson) is trying to run S.H.I.E.L.D in Nick Fury’s (Samuel L. Jackson) absence with War Machine (Don Cheadle), Okoye (Danai Gurira) and Rocket (voiced by Bradley Cooper) helping her out.

Meanwhile, Hawkeye (Jeremy Renner) is killing bad guys en masse and Thor? Well, he’s kind of channeling “The Dude” from “The Big Lebowski.” All he needs is some bowling shoes and a pitcher of White Russians.

When Ant Man (Paul Rudd) returns from the Quantum Realm, where time moves differently from everywhere else, and approaches the remaining Avengers with a way to get the stones before Thanos does, that involves time travel, so they go visit Tony, who has put away the Iron Man suit in favor of being a family man. He refuses to help because he feels it’s impossible at first, but when he figures the time travel thing out, he gets back with the team.

Without spoiling it too much, once the group gets the stones, and the Thanos Snap is reversed, an epic battle ensues. Not everyone makes it out alive, and in the end, the MCU character who has grown the most over the last 10 years winds up being the one who ultimately saves the day.

One thing that I’ll hand directors Anthony and Joseph Russo and scriptwriters Christopher Markus and Stephen McFeely is that they made the most of the time they were allotted for “Endgame.” It didn’t feel like a three-hour film.

From a story standpoint, this was the best of the “Avengers” movies, if not one of the best of the MCU overall. The plot points could have gone really off the rails with the whole time travel aspect, but they didn’t. There was enough connection made between previous films and “Endgame” where folks who hadn’t seen any of the movies — and I don’t know who that describes at this point — can follow along without getting totally confused.

You also get a sense of where the MCU is going next by the end of “Endgame,” and this new direction is going to be a challenge to the folks who are still mad at Larson for asking for a more diverse group of film critics on the press tour for “Captain Marvel.”.

That’s because the MCU — at least from what I saw in “Endgame” — is going to feature more women and people of color. And before anyone thinks there’s going to be any drop off from a financial standpoint, remember that both “Captain Marvel” and “Black Panther” each grossed a billion dollars.

So, while there’s some folks we’ll probably only see in flashbacks from here on out — one of which I’m still kinda ticked off about — I’m really excited to see what comes next because in the words of one of my favorite characters in the MCU, “Part of any journey is the end…”