A review of ‘The Paper Tigers’ 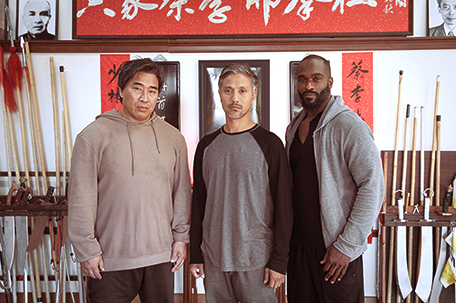 What do you get when you combine a coming-of-age story, martial arts and laugh out loud comedy in a film? Answer — the upcoming film, “The Paper Tigers.”

After many years of studying and becoming proficient in martial arts, a misunderstanding causes the trio to grow apart, and give up on their training. The Three Tigers are reunited later in life as out of shape, middle-aged men, and they set off on a hilarious journey to avenge the death of their “shifu”(which is the Mandarian word for “master”).

From the moment that “The Paper Tigers” begins, the chemistry between the trio is incredible to watch.

“I love these guys,” Yuan said. “We all loved the script and when we got to meet each other it was a bond. We ended up doing breakfast, lunch and dinner together and not just going over the script. We worked hard on the script, but we also learned a lot about each other. For me it was the best experience bonding with these guys. I love my journey with them, and I love watching them work too.”

Jenkins also expressed his appreciation for the brotherhood he developed with his castmates.

“I think with Alain and Ron, the beauty of the relationship is that when you’re young you develop friendships, you blow off a lot of time, because you don’t really appreciate them,” he said. “We met each other at a time where you know it’s rare. In that 6 to 8 weeks, we were able to build the kind of relationships that take people 6 to 8 years.”

“The Paper Tigers” gives the audience a story of martial arts and brotherhood,but it also addresses topics like growing older and ageism. Yuan, who had to gain 68 pounds to take on the role, spoke about his love for the film’s approach.

“There is a lot of philosophy behind the martial arts in this film, but it’s done right… it’s not hammering you over the head with it,” he said. “It’s done through the bonds and through the relationships. Because I’m older now and not able to do certain things and going through the same thing these guys are, though I might have hidden it from my friends.”With most martial arts movies, the heroes come in, beat up the bad guys and save the day. In “The Paper Tigers,” the heroes often find themselves on the receiving end of losing battles.

“When I was looking at the script and learning the fight sequences, I said ‘does he ever come out of this? There are definitely moments where you’re like, ‘Am I ever going to be the hero?’”, Uy asked with a laugh. “There are certain tropes you see in martial arts films where the conflict arises, there’s a training sequence, then the hero fights and wins the day. I think the real conflict here is trying to figure out who you are. You deal with the realities of the present day. It’s not just a martial arts film. The approach for this is so grounded and so real.”

“I had a problem as a Black man getting a whipping,” Jenkins added jokingly. “I know my friends are going to see that. I have never taken an “L” (loss) in cinema or in life and here I took a couple of “Ls.” My ego was slightly bruised. I appreciated the truth of it. It boils down to what the big “W” (win) really is in the end, is what we found in each other — not in these altercations. We have to sometimes learn from the altercations what really matters. I love how this film did that… we grew with each situation.”

When asked about what they hope the audience will walk away with after seeing “The Paper Tigers,” the trio, almost in unison, said they hope the audience will want to know when they are coming back for Part Two. This film absolutely deserves a sequel. The chemistry, the incredible fight sequences, the light-heartedness, humor, redemption and integration of real life are balanced brilliantly throughout the film. Additionally, the brotherhood and friendships this movie offers to the viewers are unmatched and serve to remind us to cherish our friends new and old just a little more.

“The Paper Tigers” opens in select theaters and will be available on-demand beginningMay 7. It’s a one-of-a-kind film that is absolutely worth the watch!

Review: The tech is advanced, but ‘Gemini Man’ is lifeless