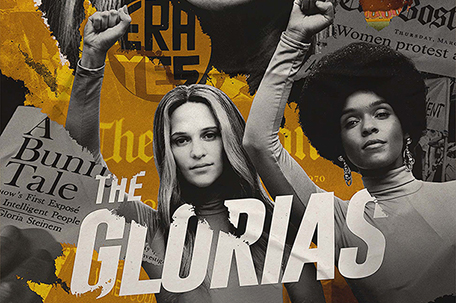 Gloria Steinem is one of the most prolific pioneers of the feminist movement in America. Her work as a journalist and activist have led to a great deal of change for the Women’s Liberation Movement. In addition, her allyship aided in the Civil Rights Movement.

Directed by Julie Taymor, with the screenplay written by Sarah Ruhl, “The Glorias” is a creative adaptation of Steinem’s 2016 memoir, “My Life on the Road.”

The film tells the story of the iconic feminist in four different stages of her life, played by four different actresses who often interact with one another. Alicia Vikander and Julianne Moore take on the role of Gloria Steinem for the majority of the 2 ½ hour historical drama.

One aspect of “The Glorias” that stands out from the very beginning is the use of color, or lack thereof, to show the contrast between Steinem and the outside world. The film begins with a young Steinem in black and white, riding a Greyhound bus, staring out of the window at a vibrant and colorful world. This perhaps could represent the limitations of a young girl turned woman, growing up in the 1940s in Ohio.

Steinem in her 40s eventually steps off of the bus into the colorful world she always saw herself in. From childhood, she is known for her admiration for her father, a free spirit and her desire to wander and explore… a trait that remains with her throughout her life and career.

“The Glorias” also does a phenomenal job at detailing the struggles of Steinman’s life from the moment she decides to use her words and voice for change. She experiences a great deal of  sexual objectification and advances in the workplace throughout her career, as well as  facing the consistent question of “when are you getting married?”

Despite the outside world’s desire for her to fall in line with the confinement of women that was the status quo, Steinem refused and prevailed. Her persistence is a reflection of the support from her father whom she idolized. Her father even supported her decision to take part in a two-year fellowship in India and postpone her wedding.

During her trip, Steinem discovers that women all over the world are experiencing similar pain and restrictions at the hand of patriarchy.

She then decides to follow in her mother’s footsteps and becomes a writer, eventually becoming a columnist for New York Magazine. Her mother Ruth, usually prim and reserved, rebelled in her own right by becoming a writer. Ruth used the pen name of Duncan MacKenzie, because women weren’t allowed to be writers at the time.

Through the majority of her career, Steinem faced obstacles placed in front of her at every turn, simply because she was a woman. In one particularly powerful scene, she explained what she wanted to write about.

“The Glorias” chronicles how Steinem became the face of the women’s liberation movement. It also shows the parallels between the Civil Rights Movement and the fight for women’s rights, and how she aligns herself accordingly with powerhouses like Dorothy Pitman Hughes (Monáe) and Flo Kennedy (Toussaint).

The film does not shy away from showing the intersectionality between racism and sexism, with Toussaint stating, “racism and sexism are intertwined…they cannot be uprooted separately.”

With the support of her fellow feminists, Steinem becomes the founder of women’s liberation magazine, Ms. Magazine.

Ms. Magazine — the first of its kind — spoke candidly about the reproductive rights of women, including abortion, equal pay, childcare, sexual expression and freedom outside of reproduction, welfare, patriarchy and the restrictive social constructs surrounding gender.

Steinem — who chose to have an abortion at 22 in London while waiting for her visa to travel to India — kept her promise to the doctor who performed the then illegal practice to, “do what you want to do with your life.”

Throughout her life, she continued her fight for women’s rights, also aiding in the fight for the rights of indigenous women.

“The Glorias” is effective in exploring the battles that Steinem fought throughout her life — many of those battles women are still fighting. The stylized cinematic choices add to the allure of the film. Some of those choices include imaginative hallucinations, innovative techniques utilizing color, and by showing the fear that Steinem experienced as a woman through the lens of her as a child.

An added bonus is seeing the real Steinem in all her power and glory in the final portion of the film.

What Steinem accomplished for women all over the country is incredible. She is truly a force. The film successfully pays homage to the life and legacy of Gloria Steinem.

“The Glorias” — which premiered on September 30 — is available digitally. It is streaming exclusively on Prime Video at: www.amazon.com.