A review of ‘On The Rocks’ 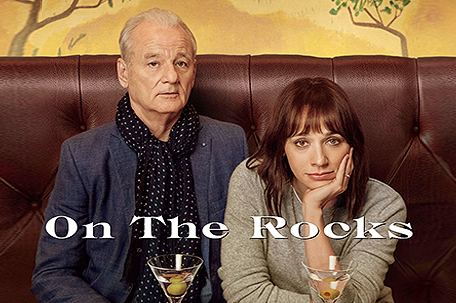 As it pertains to marriage everyone has an opinion. The conversation often shifts to the amount of marriages that are ending in divorce. What is it that causes love, relationships and marriages specifically to end?

“On The Rocks” — an Apple Original Films and A24 release — explores some of these questions. Written and directed by Sofia Coppola, the film tells the story of Laura (Rashida Jones) and her husband Dean (Marlon Wayans). After years of wedded bliss and two young children, Laura starts to question if her husband’s persistent working and work trips are just that, or a cover for cheating.  Insecurity meets an outrageous adventure when Laura’s eccentric father Felix (Bill Murray) adds to her suspicion by encouraging her to investigate.

The film begins with a voice over of Felix telling his daughter to not give her heart to any boys until she’s married, and even then “you’re still mine.” The next scene is a juxtaposition between Laura and Dean’s wedding and their present-day reality. The first shows the spontaneity of the newlyweds sneaking away from their reception, throwing their wedding clothes on the ground and jumping into the pool.

The following scene shows Laura picking up the scattered clothing of her children from the floor of their home. The viewer sees Laura struggle to get her children ready in the morning, with very little help from her busy husband. Juggling the responsibility of taking both children to school, at two different locations, leaves very little room for Laura to spend time on her writing and even less time to feel secure about herself and her marriage.  She feels stuck and those feelings are amplified after Laura finds her husband’s coworker’s travel bag tucked inside of his bag.

Hijinks ensue when Laura reveals her findings to her father. Felix responds in the overprotective way most fathers do and decides to hire someone to follow Dean. He needs to get more intel to determine if he is in fact cheating after all. Laura and Felix’s relationship is endearing; the polar opposites have a sacred bond that is enjoyable to watch.

Laura is reserved, understanding and moves gingerly with trepidation, questioning almost everything. Felix is boisterous, suspicious and confident, moving to the beat of his own drum. Despite their very different demeanors, Laura trusts her father and values his opinion.

During a heart to heart, she asks her father how to keep husbands from cheating. This dialogue opens up questions and unhealed wounds surrounding her own parent’s failed marriage. Felix’s larger than life personality ups the ante when Dean misses Laura’s birthday for yet another work trip. The only logical conclusion for Felix is for them to follow Dean and find out the truth for themselves.

In one particularly amusing scene during their “stakeout,” Felix manages to charm his way out of a moving violation when he is pulled over by cops for speeding. The encounter ends with the cops helping to push his vintage, noisy red antique convertible. After the father and daugther’s sleuthing lands them in Mexico during Dean’s work trip, Laura realizes Dean isn’t cheating when he surprises her by coming home early.

Ultimately, “On The Rocks” is playfu,l and the main characters do their due diligence in showing the complexities of marriage, father daughter relationships and personal growth. In addition to the undeniable charisma and charm that Murray brings to the character, there is a vulnerability that shines through. All of the characters have a central desire… to feel like they are enough for the people that they love.

Murray is trying to spend more time with Laura, to make up for not being physically and emotionally present after the dissolution of his marriage to her mother. Laura is trying to be enough for her husband and children and still maintain the voice and spontaneity that she feels she has lost during the course of her marriage. Dean verbally expresses his desire to be enough for his wife and his girls.

Ultimately, “On The Rocks” is a love story about a father, a daughter and the man she loves — a good and faithful man, which is a refreshing twist. It also serves as a reminder for the importance of communication and honesty… both to others and ourselves.