A review of ‘From The Ground Up’ 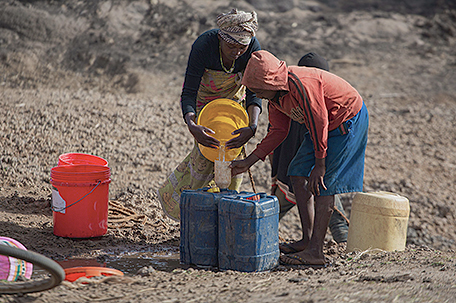 Every year Hezekiah Lewis — a writer, director and film professor at Villanova University — takes a group of his students abroad to create a social justice documentary.  During that process, students are expected to create a production company and fundraise to pay for the creation, production and post-production costs, travel, shots, equipment and any other essentials necessary to create their film.

Glass Rose Films — which also includes Lewis as executive director, Amari Johnson as group advisor and Nema Etebar as a creative consultant — traveled to Africa to document the lives of women in two small rural communities in Singida, Tanzania.

In partnership with the Chris Long Foundation’s Waterboys initiative, the students focused on highlighting the international water crisis — specifically from the perspective of women who are the backbones of the community in Tanzania. The short documentary film that they created is called “From the Ground Up.”

“From the Ground Up” follows the life of a woman named Adija and her daily journey finding water for her village. The documentary opens with two startling statistics about the state of clean water access both in Tanzania and globally. The first statistic on behalf of UNICEF, states that “approximately 26 million Tanzanians do not have access to clean drinking water.” The second statistic from the UN World Water Development Report, states that “it is estimated that by 2025, nearly 2 billion people worldwide will live in areas plagued by water scarcity.”

Water–the life source that is vital for every human being to survive — is a topic that should be discussed often, especially as it pertains to worldwide access to clean water.

Immediately following the startling statistics, the film begins with a stunning exterior shot of a brick home with a chicken leisurely walking in front of it. Subtitles translate Swahili to English as Adija shares her experience regarding her health and her personal relationship with water.

In the film, Adija explains that when she wakes up, the first thing she does is search for water.  She begins her search for water at 3a.m. Adija also shared that she had been drawing water from the same watering hole since she was a child. Going to the aforementioned watering hole takes a tremendous amount of effort, skill, labor and on days when the ground is dried up, it is nearly impossible to collect anything but mud.

The visuals from a technical standpoint are incredibly beautiful; those images, however, are jarring. The viewer sees Adija and other women from her village draw water while surrounded by gnats and flies. The viewer sees various living creatures crawling in the water. The film shows children drinking visibly cloudy water directly from the water holes — there is no filtration system.

Throughout the documentary, Adija reiterates the importance of water and how it is used for everything… cooking, bathing, cleaning and drinking. She states that finding water brings the people in her community peace.

The documentary ends with a person watching Adija on a TV screen. She carries two red buckets filled with water; one in her hand and one on top of her head. The person watching Adija’s arduous journey to find and bring back water to her village, is drinking a perfectly clear glass of water.

“From the Ground Up” centers the stark contrast in the access that some have to clean water vs. others; that everyone walking the earth should have access to potable water.

Not only is Glass Rose Films doing the work to share the stories of Adija and so many others worldwide who do not have access to clean water, they are also putting their efforts into raising $90,000 in order to build two solar powered water wells. Those wells will serve 15,000 people.

“From the Ground Up” is available for rent at www.glassrosefilms.com. All proceeds from the $5 minimum donation to rent the film go towards building the wells. Please consider donating whatever you can to help provide a basic human necessity to the people of Singida — clean water!