A review of Apple TV’s original film, ‘The Banker’ 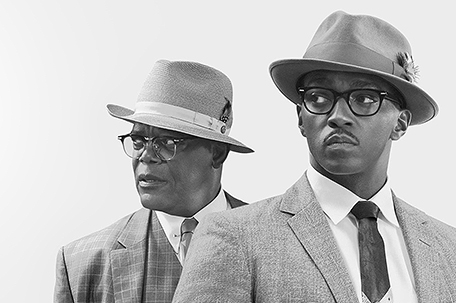 America has a long, sordid history of discrimination against African-Americans. Over the years, those practices have impacted their everyday lives, including where they are allowed to live, do business and simply exist.

The Apple TV original film — “The Banker” — tells the story of two African American bankers in the 1950s and 60s  who experienced this  discrimination first hand.

The drama — co-written by Nicole Levy and George Nolfi, and produced and directed by Nolfi — stars Anthony Mackie, Samuel L. Jackson, Nicholas Hoult and Nia Long. Based on a true story, in “The Banker” innovative businessmen Bernard Garrett (Mackie) and Joe Morris (Jackson) attempt to beat a system designed to keep Black people from advancement or acquiring wealth.

Garrett, who works his way up from shining shoes in his Texas hometown to becoming a real estate investor in Los Angeles, experiences rejection at every turn in his attempt to create a better life for his family. After successfully attaining a loan for $10,000, Garrett purchases a multi-unit rental property in a Whites only area.

At the time, neighborhoods were segregated and the practice of “red lining” was considered the norm. Garrett’s desire was to drastically change that.

In the film, he is greeted by one of his White tenants and told ‘don’t sass me boy’ after informing her that he owns the building. The police reiterate her disrespectful directive after arriving on the scene and leave after telling Garrett to have more respect for his tenants.

Garrett continues to attempt to build and begins a partnership with Patrick Barker, an Irish property owner.  Although their partnership is a great idea in theory, Garrett is forced to remain a silent and  hidden partner.

Barker’s untimely death serves as a reminder that the unfair practices of racism in business have not changed. No one, including Barker’s wife, is willing to continue the partnership with Garrett. The unwavering support of Garrett’s wife, Eunice (Long), and his determination to give African Americans a fair chance at the “American Dream” is the fuel that keeps him going.

Garrett realizes the power in numbers and forms an alliance with Morris. The plan is to purchase a bank in Texas, but the only way to do that in one of the most racist states in America in those days was to use a White man as the face of the operation. Garrett and Morris pose as a janitor and chauffeur respectively, while a working-class White man named Matt Steiner (Hoult) serves as the front man.

Garrett, Eunice and Morris have to teach Steiner the culture — how to dress, how to golf, the proper use of utensils and last but certainly not least, how to do the algebraic equations that bankers use. When Steiner is prematurely pushed by his wife into doing more than he is qualified to do, the results are disastrous. The success of the bank, and the amount of loans they approve for people of color alert the government. Garrett and Morris are indicted for misapplying bank funds.

The convictions of Garrett and Morris for fighting against the unfair business practices of excluding African Americans from competing as real estate investors, business owners and homeowners were egregious. They were never given a fair chance in any aspect of their business lives, and their experience in court was no different.

Garrett and Morris served time in federal prison for the mistakes Steiner made in his naivety, while Steiner served no time.

“The Banker” is a brilliant film that depicts a story that many, myself included, were not familiar with prior to this film. The film shows the struggle of two brilliant Black businessmen who faced a tremendous amount of adversity at every turn.

Although the story did not end in a neatly tied bow, the foundation and groundwork that Garrett and Morris laid through their sacrifices aided in changing the landscape of housing discrimination and segregation in Los Angeles and throughout the United States. These two men are undeniably responsible for helping to change history.

The chemistry of the cast members and their stellar performances serve to pay homage to the incredible legacy of Garrett and Morris. “The Banker” is a must-see!  The film is currently streaming on Apple TV.