A review of Amazon Studios film ‘Selah and The Spades’ 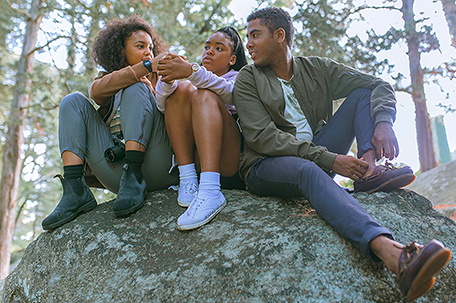 The teenage years are undeniably some of the most challenging that human beings have to endure.  Puberty, acne, peer pressure and the desire to fit in generate a significant part of that turmoil.

Amazon Studios film “Selah and The Spades” explores the ups and downs of the lives of a group of teenagers at an elite boarding school in Pennsylvania called Haldwell. Tayarisha Poe — a West Philadelphia native, 2016 Sundance Institute’s Knight Foundation fellow and 2017 select for the screenwriter and director labs — makes her feature film debut as both the writer and director..

The film, which premiered at Sundance in January 2019, gifts its audience with a myriad of life lessons that can be applied to the lives of teenagers and adults alike.

The Haldwell School is run by five factions of students with clearly understood specific responsibilities. Selah, a senior and member of the Spirit Squad, runs The Spades — the most powerful faction. The Spades are responsible for selling a wide array of drugs to anyone willing to purchase while maintaining discretion. Maxxie, Selah’s partner in crime helps run the business smoothly. Transfer student and photography enthusiast Paloma adds a new element to the dynamic of the factions, as Selah takes her under her wing as her potential replacement upon graduation.

Their friendship goes through several cycles of changes as Selah manipulates Paloma into doing anything she wants her to do. Blinded by admiration and a desire for acceptance from seniors, Paloma begins to lose pieces of herself in the process. The balance in the factions is disturbed with the discovery of a leak that threatens the system they have in place. As a direct result, Maxxie and Selah’s friendship is tested as their business relationship is compromised. A shift in power happens when Paloma’s creativity in a crisis (the prom is canceled by faculty as a form of punishment for rogue senior behavior) saves the day.  Paloma earns favor from the other faction members, and the idea that she may be replacing Selah sooner than her graduation becomes too much for Selah to bear. Selah’s attempt to restore the aforementioned balance, while maintaining her reign of power, leads to jealousy, questioning loyalty and a series of unfortunate events.

“Selah and The Spades” weaves through the weight of social adjustments and the importance of establishing, and not wavering, on one’s boundaries. It explores what can happen when insecurity and self-doubt are married in a person drunk with power. It addresses the fear tactics that are often paired with peer pressure that force many young people to go against what they know is right for acceptance and friendship — even friendship with contingencies.

The film also speaks to the dynamic of a person having a great deal power in one space and feeling completely powerless in another. Selah, who runs Haldwell like a dictator, and ready to crush anyone who steps out of line, has no say in her own future, which is dictated to her by her overbearing mother.

“Selah and The Spades” speaks directly to the expectations society has of young people and women respectively. The film shows the constant battle for young women in particular to take ownership of their destinies, their bodies and their sexuality, noting “all these people telling you how to wear your skin.”

Stylistically, “Selah and The Spades” is beautifully shot, with a colorful backdrop, an appreciation for nature and an eclectic soundtrack. The small but notable mentions of Philadelphia also add to the film’s niche appeal. There are moments of humor, where the students of Haldwell do what teens do — find creative ways to play pranks on the administration and break the rules. There are also moments of intense anxiety as the audience sees these young people struggle to find a true sense of self.

Ultimately, “Selah and The Spades” is a story about the toxic behavior that is birthed in a young woman as a result of a never-ending quest for the power and control that are lacking in so many other areas of her life. The film is skillfully crafted in a way that audiences will detest and root for Selah simultaneously — despite the fact that her instincts and actions are deplorable on multiple occasions. The characters have depth, the themes weigh heavily and the layers that are peeled back gradually set an enjoyable pace for the audience.

“Selah and The Spades” serves as a cautionary tale to anyone desperate for power and the unrealistic desire for perfection. Perfection doesn’t exist in the human condition, but thankfully grace does. The film is currently streaming on Amazon Prime.