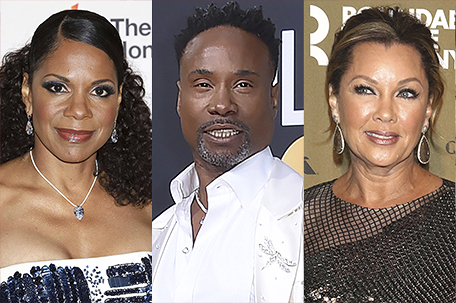 ABOVE PHOTO: Audra McDonald attends the 42nd Annual Kennedy Center Honors in Washington on Dec. 8, 2019, from left, Billy Porter arrives at the 77th annual Golden Globe Awards in Beverly Hills, Calif. on Jan. 5, 2020, and Vanessa Williams attends the Roundabout Theatre Company’s 2019 Gala, “Quite the Character: An Evening Celebrating John Lithgow” in New York on Feb. 25, 2019. Williams, Porter, McDonald and other founding members of Black Theatre United have recorded the song and video “Stand for Change,” with all proceeds donated to social justice efforts. (AP Photo)

NEW YORK — What’s better than a powerful voice from the Black theater community singing about change? How about 13 such voices?

Vanessa Williams, Billy Porter and Audra McDonald and other founding members of Black Theatre United have recorded the song and video “Stand for Change,” with all proceeds donated to social justice efforts. The friends recorded their song parts separately due to the pandemic in partnership with the Republic Records Action Committee.

“I think that we are at a point now where people are listening and people are willing to make changes,” says Williams. “It’s almost like a reset button now.”

Black Theatre United was formed in response to the wave of national unrest over racial injustice that followed the police killing of George Floyd in Minneapolis in 2020. It has hosted town halls on activism, bolstered census participation and developed mentorship programs for aspiring young Black theater artists.

Williams says the group wants to push for diversity in every aspect of theater, from what is programed to staffing at theaters, who is hired, marketing and bringing Black dollars into the theater.

“There are conversations that are happening and there are systems that are being put in place for change on every level,” she says. “This is a different time and we’re proud to be a part of making the change.”

According to the annual study, “The Visibility Report: Racial Representation on NYC Stages,” nearly 80% of Broadway and off-Broadway shows’ writers were white and 85.5% of directors during the 2017-18 season, the latest time frame analyzed.

On stages, over 61% of all roles in New York City went to white actors, a rate double the population of white people in New York City. Data on designers is even more unbalanced: In the 2018-2019 theatrical season, 91% of Broadway design slots were filled with white designers.

“Diversity is a fact, which we live with. Inclusion is a choice and it’s now time to make those choices across all levels of theater, not only commercially, but also regionally, too,” says Williams.

Other groups created in the past few years to spur change include We See You White American Theatre, Black Theatre Coalition, Broadway Advocacy Coalition, Design Action, Musicians United for Social Equity and Broadway for Racial Justice.

They’re asking theater companies about the racial makeup of their trustees, their hiring practices and their pipeline of talent. They’re creating fellowships and mentorship programs and demanding equitable representation.

“Instead of longing for old Broadway to come back, let’s be excited for the Broadway that’s coming to us if we take this time and do the work that we all deep down want to do and want to be done,” says Celia Rose Gooding, who stars in “Jagged Little Pill.”

The group Broadway & Beyond has launched virtual networking workshops for stage managers of color, while Broadway Records and the Black Theatre Coalition have teamed up to create an album of new works by emerging Black musical theater writers, elevating their voices.

Musicians United for Social Equity is concentrating on ensuring there’s a pipeline for musicians of color who want to work in the theater. It hosts a national online directory of Black orchestrators, arrangers and musicians, provides music assistant fellowships and create opportunities for mentorship, education and outreach connections.

The directory can help chip away at the standard practice of just hiring friends and would help, say, a touring company in Cincinnati find a trombone player. “So, the excuse of ‘We don’t know where they are’ can no longer be used,” says Zane Mark, a composer, orchestrator, arranger and programmer who co-founded the group.

“It’s not as simple as just hire a whole bunch of Black guys. That’s not what we’re trying to do. But we would like to go to the opening night of a show, look over into the pit and not see only white people,” he adds. His organization is mulling the idea of endorsing shows by giving its seal of approval.

Trying to reflect change, several theater companies have shaken up their staffs. The Public Theater, Second Stage Theater, Roundabout Theatre Company and Lincoln Center Theater have all appointed or elevated theater artists of color. Roundabout has a launched The Refocus Project to spotlight marginalized Black plays.

The recent push for racial equity seems to have had an impact on shows scheduled to open when Broadway does. Black playwrights and actors will be showcased in a revival of Alice Childress’ “Trouble in Mind”; “MJ,” a musical about Michael Jackson by Lynn Nottage; “Skeleton Crew” by Dominique Morisseau; “Thoughts of a Colored Man” by Keenan Scott II; and Melvin Van Peebles’ “Ain’t Supposed to Die a Natural Death.”

Broadway has had seasons where diversity gains have been recorded and then lost. The 2013-14 season was rich with roles for African Americans, including “A Raisin in the Sun” starring Denzel Washington, Audra McDonald channeling Billie Holiday in “Lady Day at Emerson’s Bar & Grill” and the dance show “After Midnight.”

That season, Black actors represented 21% of all roles. But the next season, the number fell to 9%.

Dede Ayite, who has earned two 2021 Tony Award costume design nominations and is a member of Design Action, says change has to happen before Broadway doors reopen. Her group is pushing for the day when half of all designers are non-white.

“You can’t expect things to open and feel like we’re all healed,” she said. “We have to do the legwork now so that when we start to come back then we can really enforce and not return to the way things were.”