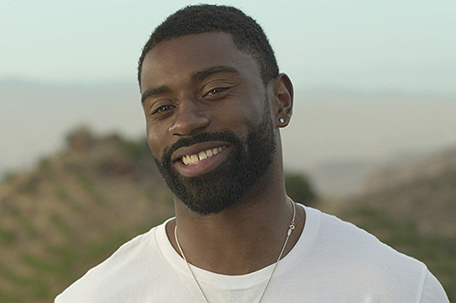 Originally from Baltimore, Nigel Sydnor attended the New Jersey Institute of Technology, where he majored in business management, minored in entrepreneurship and played basketball. After graduating, he lived in Connecticut and Miami before making Los Angeles his home.

Dating anywhere can be a challenge, but the LA dating scene has been described by many as extremely difficult to navigate. Despite some of those obstacles, Sydnor was open to the possibility of finding love. That openness eventually led to him being cast in Amazon Prime’s original reality TV series, “The One That Got Away.” The series explores the lives of six singles who are revisited by love interests from their past that arrive via a portal. They are then tasked with deciding who they want to attempt to pursue a future with, and who they will send back through the portal. Sydnor spoke to the SUN about his experience on the show and what it taught him about himself.

Many may be wondering how one gets cast on a reality show about finding love. In Sydnor’s case, it was a chance encounter.

“It was super random,” Sydnor said. “I’m at In and Out Burger in the drive through and someone comments on my IG picture. They’re like, ‘hey, would you want to be on a dating show?’ I’m like, ‘this can’t be real — like, why would I want to do a dating show? That’s not really something I’m trying to focus on.’ Lo and behold, they moved over to the DMS and then they called me. They were just like, ‘hey, I think you’d be really good for this.’ I’m like, ‘good for what reason? What would make me really good for a dating show?’ So, they started to talk about the opportunity and then they really just described this imaginary portal and that people from my past would then come into my future to date me. I said, ‘let’s see what happens.’”

Sydnor was still somewhat skeptical at this point and required a bit more convincing.

The more he found out about the show, the easier it was to make the decision to say yes.

“It’s a very extensive process,” he said. “Every step of the way when you have these conversations, I’m like, ‘this does sound kind of cool.’ Each and every person you talk to they were so sold and then they had done shows. I had never even watched reality TV before the show. The first show I watched was “Too Hot To Handle” and that was one week before we shot — and here we are.”

Some people are skeptical about people from their past and the possibility of rekindling an old flame. Sydnor shared his experiences with maintaining friendships with people from his past.

“Dating for me is really casual,” Sydnor said. “It’s always been we’re friends with mutual interests, and maybe we like certain restaurants or events that I like to go to. Then we start to progress and things get a little more serious. So, I’ve always been able to maintain the friendship and I’ve never had any bad blood in any of the relationships I’ve been in.”

“Going into this experience and even just walking down the small bridge when you’re going into the portal, one of the things that I was thinking was, who could show up?” he continued. “Areas like LA or even Miami  — they’re just so small, very condensed areas where everyone knows everyone. I was just wondering who can show up? Why would they show up? With Instagram and social media, we have so much access to people. Why wouldn’t they just reach out and just say ‘hey, let’s go grab a drink — I’ve been kind of digging you,’ or, you know, just a random three likes of a picture. Why didn’t that happen and how did we end up on a show?”

Once Sydnor took the first steps to be on the show, there were additional steps he needed to take — the walk to the portal to see who was waiting for him on the other side.

“It’s no way for you to prepare for that moment,” he said. “You don’t know who is on the other side, you don’t know what type of energy they are going to bring, and you don’t know their personality. You can’t see the person; you’re just hoping that it’s someone you want to see and that they’re equally as eager to see you. It’s exhilarating, to say the least.”

Sydnor’s experience on the show, while thrilling, also gave him an opportunity to be introspective about his approach to dating, which resulted in a great deal of personal growth.

“It was one of the best and one of the most challenging experiences of my life,” he said. “It’s challenging from the standpoint of you are dating two people. Not only are you dating two people, but you’re dating two people who you have some level of a prior history or relationship with, and you never want someone to feel like they’re not good enough for you or they’re not someone you want to be with. One of the biggest areas of growth for me was that communication piece. Being able to say while I think you’re tremendous  — because I think everyone who came to get to know me on a different level was amazing — most of the people that came were not the person I was supposed to be with.”

Honest communication aside, “The One That Got Away” packs a big punch in the drama department. One of Nigel’s love interests, Alicia, is the friend of another woman he once dated.

“Is it weird? 100%… it’s strange,” he said. “But the way that I saw it, I had the opportunity to really just see who Alicia was as a person. I wanted to remove all preconceived notions. The way that we met wasn’t the most ideal circumstance and the way we grew our relationship wasn’t the most ideal either, but I’ve grown significantly in the last four years and so has she. I wanted to take everything off the table and get to know her for the pure human she is. In between each date, and even with dating other people, I found myself missing Alicia.”

The looming question is, who does Sydnor choose? Is it Alicia or someone else? He is currently in a relationship, but you’ll have to watch for yourselves to find out how his love story ends. Be sure to follow Nigel Sydnor and his journey on IG @NigelSydnor. All 10 episodes of “The One That Got Away” are available to stream on Amazon Prime. Be sure to tune in!

Discounted access to Amazon Prime for customers on government assistance