A one on one with Morgan Siobhan Green of ‘Hadestown’ 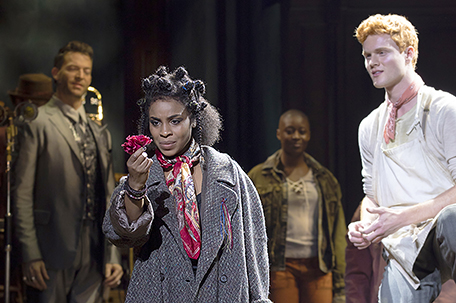 “Hadestown,” the Broadway musical, has been making waves since its debut on April 17, 2019. Developed with and directed by Rachel Chavkin, with music, lyrics and book by Anaïs Mitchell, “Hadestown” is a haunting love story that is familiar with a new twist. “Hadestown” combines the ancient legendary tales of Orpheus and Eurydice and Hades, the king of the underworld and his wife Persephone.

After winning a Grammy for Best Musical Theater Album and eight Tony Awards including Best Musical, “Hadestown” is currently on its first North American tour. Morgan Siobhan Green, who plays Eurydice in the Broadway production, spoke to the SUN about playing the character and the reality she hopes audiences will reflect on after experiencing the show.

A native of Decatur, Illinois, Green is a graduate of Bradley University. She continued her education at LIU Post for grad school then made the move to New York. After showcasing her talent for her former agent while still in school, Green went on to gain roles in “Be More Chill,” “Moby Dick” and “Between the Lines.” She landed the role of Eurydice in “Hadestown” right before lockdown.

“I landed this role pre-COVID, so I had the opportunity and the luxury that we all took for granted which was being in the same room as people,” Green said. “I got the call a few weeks after finishing another show that I had done with Rachel Chavkin. I got called in, got called back in and was seen for multiple parts. I had a final callback, which was on that day when everyone learned about COVID… you know, that day where everyone was freaking out and nobody knew what was going on. I got that call in March or April and sat on that news for over a year.”

Shortly after landing the role, COVID shut Broadway down completely. Thankfully, Green was able to embrace the lessons that the stillness taught her.

“I’m someone that keeps going and going,” she said. “What I learned during the shutdown was that I needed a break. I needed to be ok with nothing happening. I’m so used to hustling all the time, and it takes a minute for you to recognize that the hustle mentality can affect your art, your ability to give of yourself and your ability to be creative. I know that this is a very privileged thing to say, but there are worse things than being unemployed as an artist, and that is being in art that doesn’t move you or takes a lot from you. So, I had to embrace being chill and not doing anything because I’m always doing something. But I did a lot of voice lessons, watched a lot of movies and read a lot of material that reflected the kind of artist that I wanted to be post-COVID.”

Fast forward to present-day, Green is thriving in the lead role of Eurydice in “Hadestown.”  She describes the complex, non-traditional love story.

“It’s a take on the Greek myth of Orpheus and Eurydice,” Green said. “Orpheus is a dreamer and a musician who sees how the world could be. Eurydice is a poor girl who sees how the world is. He finds interest in who she is as a person and woos her with his music and his love for changing the world. The reality of the world weighs heavy on her, and she ends up selling her soul to Hades to find some refuge from constant desperation. She experiences what spring and love can bring through Persephone, but even that is not enough to pacify the starvation and hunger that she experiences — but Orpheus doesn’t give up. He uses his song, gifts and his love for her to get her out of Hades.”

Eurydice’s character is multifaceted, and the audience will be able to feel her anguish, desperation, and growth in real time. Green shared her experience playing such a layered character.

“I’m a Black woman, and I wear natural hair in the show,” she said. “Geographically, sometimes I feel like I’m in places where people don’t get me or understand why I play her the way that I do. I feel very convicted in playing her the way that I do, simply because poverty is not cute, and it shouldn’t be palatable for anyone watching. It should make you uncomfortable, or it should allow you to see the effects that something that we take for granted such as food, can affect someone’s ability to love or feel at ease. She’s really hard to play, and every night I have to tell that story. I feel grateful to be able to tell a story like “Hadestown” at the time that we’re in, where people are experiencing poverty or have been entering into poverty because of the pandemic. In solidarity with them, I feel the conviction to show someone who is lost, hurting and isolated.”

In addition to being lively and entertaining, “Hadestown” also has a hauntingly beautiful soundtrack.

“I think the song that haunts me the most is “Flowers” — I love singing it with the band, “ Green said. “There is something so haunting about how the instruments really encapsulate internally what’s happening with her and the joy of remembering. I forget the exact quote from “Wanda Vision,” but it’s something like ‘grief is love persevering.’ I don’t play Eurydice as someone that’s never had anything — I play her as someone who has lost everything. I think she isolates herself to not feel lost,  but she also engages with Orpheus knowing that means she could lose him or be hurt by him with all of those things that come with letting someone in.”

Green shared her wish for the audience.

“Hadestown” is a depiction of how life experiences can shift our perspectives from one of hope to one of despair when doubt creeps in and bleakness replaces belief. In the beginning half of the story, Eurydice has doubt, but by the end, the roles are reversed, and Orpheus is struggling with maintaining faith in love and what he believes in his heart. This story serves as a reminder to follow one’s heart, even if the outcome isn’t exactly the one you wanted.

Be sure to follow Morgan Siobhan Green on IG @ morgansiobhan. “Hadestown” will be at the Academy of Music on the Kimmel Cultural Campus through February 20. Visit: www.kimmelculturalcampus.org for more details on tickets and showtimes.