A one on one with Miriam A. Hyman 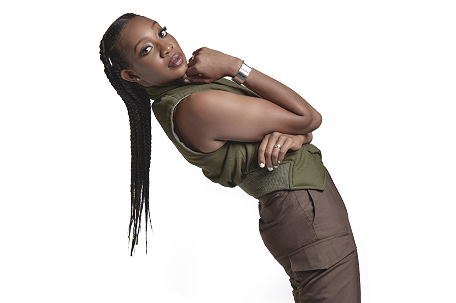 Navigating through the entertainment industry can be challenging for creatives. They are often told to focus on one thing — an impossible task for the multi-hyphenate, multi-talented Miriam A. Hyman.

Born in Lancaster, Pennsylvania and raised in Philadelphia, Hyman has seamlessly explored her many gifts as an accomplished lyricist as “Robyn Hood” — seasoned actor, ghostwriter and voice over talent. A graduate from the Yale School of Drama, Hyman was a recurring guest star, taking on the role of Dr. Emile Cooper, over 3 seasons of CBS’ “Blue Bloods”, held a supporting role in Netflix’s “The Laundromat” and took on the role of Patricia Kingsley in “The Sun is Also a Star.” With the release of her latest EP, “Alter EGO,” under her company Truth Teller Productions, a role in “The Chi,” and the upcoming radio broadcast of “Richard II,” Hyman continues to successfully forge her own path. She spoke with the Philadelphia Sunday SUN  about her journey.

As a multi-hyphenate, exploring various aspects of creativity is key. Hyman offered her perspective.

“It’s about having a creative balance — I love to do a lot of different things and I don’t restrict myself,” she explained. “I’ve never been one to box myself in and say, ‘I can only be really good at one thing.’I believe we can all be good at a lot of things, but we just have to decide that we want to try new things, then work towards expanding our level of skill set, our creativity and just be open.”

Hyman, who has studied Shakespeare, will be returning to her theater roots in a four-day radio broadcast of “Richard II.” Hyman will star as Bolingbroke, alongside André Holland (Richard), Phylicia Rashad, Estelle Parsons, John Douglas Thompson and more.

“I love Shakespeare… I fell in love with the language from the very first Shakespeare play that I read,” Hyman said. “I was working on Richard II, it was supposed to be Shakespeare in The Park, but unfortunately due to corona we had to postpone the production. There was an opportunity that arose between WNYC and The Public Theater to broadcast the play via radio. Of course, I was 100% on board. We rehearsed the entire play via Zoom with all the cast members, vocal coaches and tech coaches.”

In addition to starring in “Richard II,” Hyman will play the new character Dre in season 3 of “The Chi.”

“Working on The Chi has been nothing short of amazing,” she said. “It’s a dope time, especially with the focus on Black Lives Matter. Black stories have always mattered, Black people have always mattered to us. It’s really wonderful to be a part of a production that focuses on Black lives, Black relationships and Black love. Even the billboard is seven gorgeous Black faces, and when do you see that? We’re never on display in that way in a really positive manner, on a consistent basis… so when it comes, we have to hold onto that.”

Not only does “The Chi” highlight Black stories, it highlights the complexity of Black people with characters like Dre. Hyman attributes the layers of her character to the writers.

“Lena Waithe and the other individuals writing on the show, salute the fact that we do have variety in our community and also within society,” she said. “I’ve always felt that film, television and plays should be reflective of what we actually see. It’s not that a lot of times, which is why we’re screaming for diversity.I just feel like we have to continue to do the work that we are doing collectively and individually — how we’re raising and lifting one another up to be progressive in society to have our own standard and live by those.”

In addition to doing the work to move society forward on stage, television and in film, Hyman — aka “Robyn Hood” —is an award-winning lyricist, ghostwriter for Academy Award winner Lupita Nyong’o, co-writer of Ciara’s “Melanin,” and was featured on Grammy and Tony Award winner Daveed Diggs’ “All in Your Head.”

Hyman spoke about the creative process behind her latest EP.

“I was able to finish the EP during this time of corona,” she said. “My producer (East-O) and I have been working on it for about a year. All of the studios were shut down, so I was limited in terms of where I could go to record.I built an in-house studio situation so I could still work at the craft and ideas.”

“I thought about the conversations that I’ve had with label execs, top producers, or individuals who have a level of power within the industry,” Hyman continued. “A lot of times you get put into a box as an artist. The things that you would like to ultimately create, kind of get swept under a rug or pushed aside because ultimately the goal is to make money. Sometimes artists are backed into a corner and end up creating things they did not set out to create.”

Despite the push for capitalism, where creativity is often a casualty, Hyman went against the grain and prevailed in carving a niche that is all her own.

“ “Alter EGO” is a balance of skits and the music that comes out of these skits,” she said. “The pressures that we are put under and how we’re still able to create and still able to show up. I had a blast creating the songs and I love being able to be in myself but also step outside of myself and play with the private vs. public.”

In addition to “Alter EGO,” “The Chi” and “Richard II,” Hyman is a featured actor named Bismuth in “Steven Universe: Future” on Cartoon Network. With the level of talent Hyman possesses and her dedication to exploring all of her gifts to the fullest, the possibilities are endless!

Tune into “The Chi” every Sunday at 6p.m. PT/9p.m. ET. “Richard II” will stream over four nights, from July 13t-16 at 8p.m. ET on WNYC.org, WNYC 93.9 FM and AM 820. “Alter EGO” is available for digital download on multiple platforms. Be sure to follow Hyman on social media at: @robynhoodmusic.