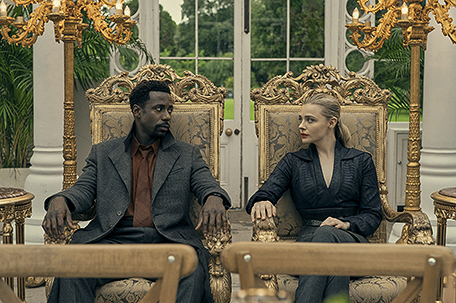 ABOVE PHOTO: Gary Carr in a scene with co-star Chlöe Grace Moretz in a scene from “The Peripheral” Photo courtesy of Prime Video

Sci-fi fans have a lot to look forward to with the  Prime Video series “The Peripheral.” Brought to audiences by the creators of “Westworld” (Jonathan Nolan and Lisa Joy) and based on the novel by William Gibson of the same name, “The Peripheral” tells the story of Flynne Fisher (Chlöe Grace Moretz).

Set in the American South, Flynne and her brother Burton Fisher (Jack Reynor) play VR games for rich people for the extra money they need to make ends meet. During one of Flynne’s adventures into VR, her headset catapults her 70 years into a futuristic London. She quickly realizes that this VR game is not a game at all and is very real. Flynne is forced to find the connection between this futuristic world and her world to protect herself and her family from the danger that is ever present at every turn.

Produced by Amazon Studios and Warner Bros Television, in association with Kilter Films, “The Peripheral” also stars Alexandra Billings (Inspector Ainsley Lowbeer), Gary Carr (Wilf Netherton), Katie Leung (Ash), Eli Goree (Conner Penske), Charlotte Riley (Aelita) and T’Nia Miller (Cherise Nuland). Gary Carr spoke with the SUN about his role as Wilf in “The Peripheral” and what it was like immersing himself in this futuristic world.

The novel “The Peripheral,” published in 2014, was positively received. Carr was unfamiliar with the material at first but was quickly drawn to the story.

“The first time I heard about the novel was when I met with Jona (Jonathan Nolan) and Athena (Wickham). They told me not to read it actually, which I understand because they’re doing an adaptation,” Carr said. “The book is quite dense but brilliantly written. The minute after I came off my meeting with them, I bought the book and fell in love with the novel. It was the first time I read a science fiction novel as well and I just kept thinking I don’t know why I’d taken so long to do that.

“Once I read the novel, I was super excited to see what was going to happen for the series and the adaptation,” he added. “I also found out the book has a huge following with a fan base that’s really strong, so that was exciting.”

The excitement continued to build as Carr began preparing for his role in “The Peripheral.” He was blown away by the adaptation of the story when he first read the script.

“I was really impressed with the writing,” he said. “I was reading the novel and I was, like, ‘How are they going to make this into a show? I wonder if the dialogue is going to be the same.’ I was really concerned about the tone, but I think they did a really great job. I felt really good after reading that first draft and seeing how strong the characters were and the worlds they were building and creating which I thought were so cool.”

“I also had a lot of confidence before we did anything that they would do a great job, because I’m a massive fan of Jona and Lisa’s work and Athena as well,” Carr said. “I’m a massive fan of “Westworld” and everything that Jona has done, and not just in TV, but in feature films as well. I had a lot of confidence that they’d do a great job, and they did.”

Wilf is a complex, multifaceted character with a duality and layers that are revealed gradually throughout the series. Carr shared his thoughts about his character. .

“In the novel, he comes across sometimes as passive,” Carr said. “I thought, ‘I hope that’s not the case in the series.’ I wasn’t too excited about having to play someone that was so passive, but in the adaptation, I think what they make clear is that it’s his job actually to not be so presentational. It’s his job to literally have things stay under wraps and I thought that was really cool.”

“When I was watching “Westworld,” I was looking at Anthony Hopkins’ performance thinking how impressive it was that he really didn’t do much but was able to present so much at the same time,” Carr continued. “I thought that was so skillful. I was like it would be really great if I can learn from him and apply that to this character. Wilf is very still. It was very challenging to play all these things that were going on internally but present as something else. I also really enjoyed that and feel like I learned a lot as an artist and an actor playing this character.”

Many have speculated about what a futuristic world could look like. “The Peripheral” gives audiences a glimpse at how technology could impact our future.

Carr shared what it was like to be immersed in “The Peripheral’s” world.

“It was super easy!”he said. “One thing I was really happy about was I turned up on set and there was hardly any green or blue screen. There were so many things that didn’t make the final cut of the show, but there were things engineering-wise and mechanically that the crew actually made happen and created. There was hardly any CGI and we actually rehearsed some of those sequences to make it real. Also, we shot in real London –there wasn’t any dressing up of the streets. It was very cleverly done with the elements they decided to focus on aesthetically.”

“Michele Clapton designed the costumes,” Carr continued. “That’s a huge layer when it comes to character building — how your character presents themselves, their aesthetic, their silhouette. All these things helped me in a huge way jumping into the world and the character. Also, the writing is so strong. It was really great to be a part of this project, contribute in this way and jump into this whole world.”

Although “The Peripheral” has twists and turns around every corner, Carr’s hope for audiences is that they will enjoy the futuristic story without fearing the power of technology.

The entire series “The Peripheral” is available to stream and binge on Prime Video. This is a series you don’t want to miss!

The Limelight Series… with Kevin Carr

How Viola Davis escaped another maid role in ‘Beautiful Creatures’