A Millennial Voice: Must watch shows during the “cuffing season” 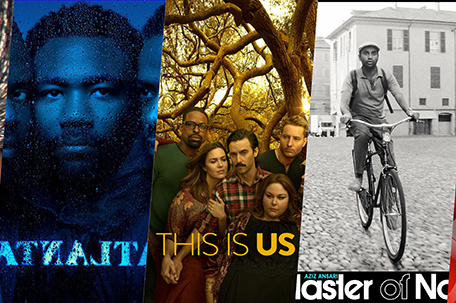 With fall and winter on the horizon, many of us are preparing to go back into lengthy periods of recluse. The second half of this seasonal cycle is commonly referred to as “cuffing season,” which inadvertently means that folks are looking for new shows to add to their arsenal. Whether you’re looking for a new boo, trying to impress a new bae, or just looking for good shows to watch, Netflix and Hulu have some great choices to accompany you on those cold, gray nights. Here’s a list of some of my favorites. Watch them and let me know what you think.

1. Master of None: Aziz Ansari and Alan Yang’s “Master of None” is one of the most brilliant shows I’ve ever seen. Between the cast, the story line, the cinematography, and more, I can honestly say that I’ve never seen a better Netflix original. It’s romantic, it’s funny, it’s serious, and a bit dejected at times. But it’s a great show to watch with your bae.

2. The Office: “The Office” is the only “classic” on this list, and for good reason. The U.S version of the U.K smash hit is a fan favorite because of its diverse and lovable cast, witty lines, and the cast’s comical delivery. Due to the current political, racial, and social climate, a show like this wouldn’t have lasted in today’s society, but that may be a part of its appeal. Steve Carell’s portrayal of Michael Scott is genius and lends to the genius of the show. If you like dry humor/comedy, this is the show for you.

(A few months ago we found out that the show is being taken off of the popular streaming site, so I suggest you watch it while you can! Don’t worry, though –it’s an easy watch.)

3. Parenthood: “Parenthood” is loosely based on the 1989 film by the same name, and is critically acclaimed for its rawness. The show is about the Braverman family and explores many different tropes and themes like same-sex relationships, autism/mental disability, interracial couples, teenage pregnancy, and more. What makes this show so revolutionary is that it covers topics that weren’t commonly discussed at the time it was created. The series finale was in 2015, but you can find it here.

4. Parks and Recreation: “Parks and Recreation” is comedy gold and is often compared to “The Office.” Leslie Knope (Amy Poehler) loves her community of Pawnee, Indiana and will do whatever it takes to make others love it too. Pawnee is what some would consider a “dump land” due to their zany rules and their glorification of fat/unhealthy foods, but with the help of a star-studded cast, Knope works tirelessly to get people to understand the beauty that lies within the fictional suburb.

1. The Act: “The Act” is a series loosely based on the true story of Gypsy Rose Blanchard (Joey King), a “teenage” girl who killed her mother, DeeDee (Patricia Arquette, who won an Emmy last Sunday night for this performance) after realizing that she’d fabricated the illnesses that held her captive. Researchers suggest that DeeDee suffered from a condition called Munchausen By Proxy, which prompted her lying. True crime shows have become extremely popular within the last few years. At times, “The Act” can be a bit chilling to watch at times, but if you’re into addictive true crime thrillers, this  you.

2. Atlanta: Donald Glover’s “Atlanta” was an instant hit on FX and can be streamed 24/7 on Hulu. Glover’s hit series explores the life of of Earnest (Glover) as he tries to help his cousin Alfred/Paper Boy (Brian Tyree Henry) navigate Atlanta’s rap scene and become a superstar. The show is both hilarious and serious at times, but the cornucopia of the two makes for an epic show.  The series’ home is the FX network, where it will return for a new season in 2020. But until then, you can find the first two seasons here.

3. Black-ish: “Black-ish” is another ABC hit that’s still on TV, but can be binged on Hulu as well (I know, I’ve done it). “Black-ish” may be one of my favorite shows on this list, as it has the authentic Black qualities that remind me of my favorite 90s sitcoms. Rainbow (Tracee Ellis Ross) and Andre Johnson (Anthony Anderson) explore parenthood, marriage, and more with the help of an astounding supporting cast. The show now has two spin-offs — “Grown-ish”, which is shown first-run on the Freeform network and “Mixed-ish,” which premiered on ABC on Tuesday —- that can be found on Hulu as well.

4. This is Us: NBC’s huge hit, “This Is Us,” has been the talk of the town for three years now. The melodrama follows the lives of the Big Three –Randall (Sterling K. Brown), Kate (Chrissy Metz) and Kevin (Justin Hartley), as they navigate their lives following the death of their father. The past and present are often strung together beautifully to provide valuable lessons that often take viewers on an emotional rollercoaster. “This is Us” is the show to watch when you’re in the mood for a good cry and need a reminder that true love does exist. It can be watched live on NBC on Tuesdays, or streamed on Hulu.

Other shows to look out for on Netflix and Hulu:

The five TV shows not to be missed this season