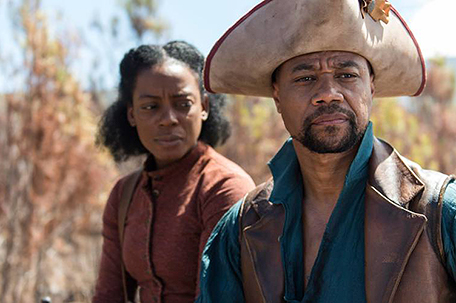 ABOVE PHOTO:  Aunjanue Ellis as Aminata Diallo with co-star Cuba Gooding Jr. in ‘The Book of Negroes’

NEW YORK –“The Book of Negroes’’ tells the story of an 11-year-old girl kidnapped from West Africa in the 18th century who became a slave on a South Carolina plantation, an activist in New York City and a recipient of a harsh brand of freedom in Halifax before facing more peril on her return to Sierra Leone, then, arriving in England late in life, being honored for her courage and ideals.

Aminata Diallo is this singular champion, who in a stirring BET miniseries becomes the author of the real-life “Book of Negroes,’’ a historical document compiled in 1783 by order of the British military at the end of the Revolutionary War. It chronicles some 3,000 blacks who during the war had served the King of England against the colonists, and were thus allowed to flee to Canada where they could find the freedom they wouldn’t have been granted in the newly independent United States.

Adapted from the 2007 novel by Lawrence Hill titled “Someone Knows My Name’’ (published outside the U.S. as “The Book of Negroes’’), this epic miniseries aired in two-hour installments on Monday, Tuesday and Wednesday at 8 p.m. EST.

But “The Book of Negroes’’ stars Aunjanue Ellis, who portrays Aminata from ages 20 through 57 in an impressive and evolving performance.

“In those 37 years, she goes through a heckuva lot,’’ says Ellis with a laugh of wry understatement.

Ellis herself went through a heckuva lot in this portrayal. Known from The Help, Ray, Get On Up and her recurring role on CBS’ “The Mentalist,’’ she depicted numerous phases of her character during a breakneck three-month shoot in South Africa as well as Halifax and Toronto.

Adding to the challenge: The project was shot out of sequence.

“There were days when I was 20 in the morning and 50 in the afternoon,’’ says Ellis, adding, “Aminata was a woman who faced many tragedies and disruptions throughout her life. I had to really work hard on emotional modulation in the sense that every tragedy cannot be met with the same emotion: How you react to something in your early 20s isn’t how you react in your 40s, you hopefully have grown. And if the viewers get used to your response from scene to scene, you will lose them.’’

Another hurdle: “Aminata is a character very, very different from myself,’’ Ellis acknowledges. “I fly off the handle when bad things happen in my life. She’s not that kind of a woman. She can show fire and anger, but she does it with grace and dignity. When I depicted her that way, I would feel that I wasn’t doing enough. I would feel frustrated at the end of the day because I felt that I was underplaying.

“But I had to do that kind of work because that’s who she is. She’s not me.’’

Even so, there was one occasion when the dramatic experience of Aminata coincided with Ellis’ real-life circumstances almost as if this were an actress employing the Method.

During production, crewmembers and her fellow actors had been battling one virus after another, Ellis recalls.

“Everyone was falling down like dominoes, except me! I was fine. Tired, but fine. Then, the last week-and-a-half we were shooting, I got a fever. I knew it was high because my hands were hot.’’

She says she refused to see a doctor or call in sick, but instead powered through. And maybe, she allows, her performance was the better for her malady.

“In those scenes,’’ she explains, “I happened to be playing someone who was sick, too.’’

‘Pimps In the Pulpit’: One woman’s journey through hell becomes a matter of controversy