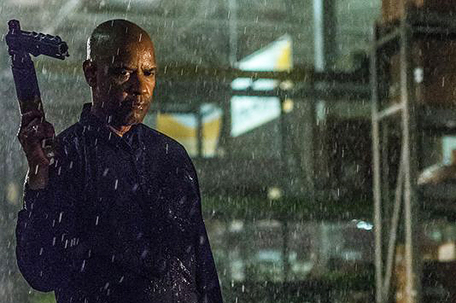 ABOVE PHOTO:  McCall could provide action franchise fodder for Denzel Washington. “The audience will decide that,” he says. “The Equalizer” will be in theaters Sept. 26.

Director Antoine Fuqua is featured in a USA Today profile of Sony Pictures’ adaptation of the TV series, The Equalizer, starring Denzel Washington, which will be released on September 26, 2014.

Chloe Moretz, Marton Csokas and Melissa Leo, co-star with Washington, who won an Oscar for his last collaboration with Fuqua, Training Day.

The reportedly $50 million project is said to be designed to launch the first film franchise for Washington – which means that  if the first film does well, expect sequels. One sequel has already been reportedly greenlit even though the first film hasn’t been released yet because it  was said to have scored well with test audiences.

The TV series the film is based on was set in New York, and centered former secret agent Robert McCall (played by the late Edward Woodward) with a “mysterious past” who tries to atone for past sins by offering, free of charge, his services as an investigator. He was aided by a diverse group of other sometimes-mysterious contacts, some of whom date back to his spying days.

In the film adaptation, Washington plays McCall as a retired intelligence operative who faked his own death to live under the radar. But after finding a young woman (played by Chloe Moretz) in trouble with the Russian mob, he returns to action to use his extreme tactics for good.

With Fuqua helming, this probably means we should expect a more hard-hitting, raw, gritty, R-rated kind of Equalizer, and not the PG/PG-13 series that was the TV show. This’ll probably be more like Denzel Washington in Man On Fire mode.