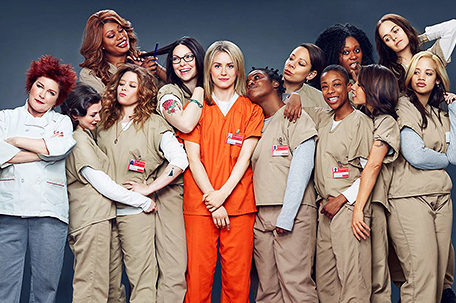 ABOVE PHOTO:  The cast of “Orange is the New Black”  (Photo courtesy: msnbc)

NEW YORK — An upper-middle class blonde from Brooklyn goes to jail for a drug-related screw-up years before.

The women’s federal prison of “Orange Is the New Black” is a different world than Piper Chapman had known, populated with a wildly varied group of characters played (alongside series star Taylor Schilling) by TV’s most diverse cast of actors.

As this Netflix series shot its second season last fall on its Queens, New York, soundstage, a visit to the all-too-gritty-looking prison set found several of these actresses delighted to be serving time on this groundbreaking drama (whose 13 new episodes are available for streaming Friday on the Netflix website):

“The hardest part of the show was finding my character before they said `Action!’ the first day,” she says. “You have to be able to show her toughness and, through her toughness, her heart – and you had to show it from the first shot.”

She did. Ever since, it’s been a blast for Mulgrew.

“This is not a vanity role,” she acknowledges. “But I’m of an age now (59) where none of that is as important as it once was. To find a role this rich, nuanced and specific is absolutely joyful for me. It’s liberating.”

“Taystee” Jefferson is Danielle Brooks’ first big role after graduating from the Juilliard School. Hers is not a vanity role, either.

“There are times when I’m like, `Can we please do my eyebrows? Can I get a little more foundation?’” says Brooks with a laugh. “But I truly enjoy the freedom of coming to work, not having to wear Spanx or extensions, to just be me. You can’t hide behind anything here. It’s really freeing.”

She wants her audience to identify with Taystee, no matter how unrelatable her character might seem at first.

“We all cry, we all bleed, we all hurt,” Brooks declares. “I want everyone to see Taystee, who they feel so far away from, and realize: `I’ve felt like her before.’”

Growing up in Washington, D.C., Samira Wiley, who plays Taystee’s friend, the jokester Poussey Washington, knew from childhood she wanted to be an actress.

“But I couldn’t necessarily see where I might fit in,” she says. It was clear there weren’t a lot of black women snagging great roles on TV. “But there’s something in you so strong you can’t suppress it: `I want to do this. This makes me happy.’

“Now, everything that’s happening for me with this show is more than I could have dreamed of,” she says. “It’s nice to be part of that surprise.”

Uzo Aduba didn’t get the “Orange” role she auditioned for. Then she learned she had been cast as the unstable, sometimes feral “Crazy Eyes” Warren.

“That was exciting. But at the same time I’m wondering: What was it about my audition that made them think, `She’d make a great Crazy Eyes’?”

After all, this is a character, says Aduba, “who has an innocence about her like a child – except children aren’t SCARY! But when I tried her on, it felt like the right part for me. I felt right at home.”

Lorraine Toussaint, whose credits include “Saving Grace” and “Friday Night Lights,” claims to have “fallen in love” with the character she plays, “Vee” Parker, a charismatic former drug dealer who used kids as her mules.

“It’s an interesting love affair,” she allows. “I get to dance with my shadow self. I get to sit in the backseat watching Vee drive the car, and she drives fast and dangerously. I get to be surprised by who she is and what she does, because I’m seeing her from the inside out.

“I think it’s more uncomfortable for the people around me,” she adds. “I find myself apologizing to other people on the set when I’m in my prison garb.”

Toussaint, who is joining “Orange” with Season 2, admits she didn’t know the show when the role came along.