A Discussion with Justin Hires of ‘Rush Hour’ 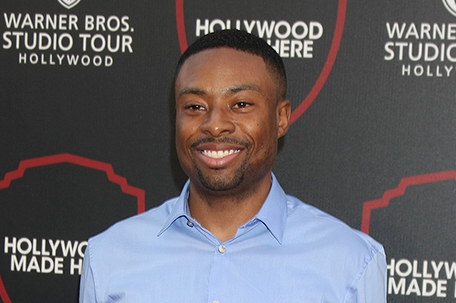 Justin Hires is a very talented actor, comedian, storyteller, dancer, video jockey and writer who will next be seen playing Detective James Carter in the CBS-TV action-comedy series “Rush Hour,” based on the buddy films co-starring Chris Tucker and Jackie Chan. The versatile entertainer has been an ensemble cast member on the sketch comedy series “Key & Peele,” and he’s also appeared in the box-office hit 21 Jump Street alongside Jonah Hill and Channing Tatum,

Hites was born in St. Petersburg, Florida where he was raised by a couple of very supportive parents. Even as a young child, he exhibited a knack for making others laugh.

While attending Clark Atlanta University, Hites was cast in two feature films: Stomp the Yard and The Gospel. He was subsequently hired by MTV as a VJ on their college network, mtvU.

Hites moved to Hollywood after receiving his Bachelor of Arts degree in Mass Media- Radio, TV, and Film. In L.A., he started doing stand-up in comedy clubs, and began landing a variety of television and film roles, while accumulating over 13 million views of his personal sketches online.

Here, the rising young star talks about “Rush Hour” which is set to premiere on CBS on March 31st at 10 pm ET/PT. (Check local listings)

Kam Williams: Hi Justin, thanks for the interview.

Justin Hires: Thanks for having me, Kam.

KW: I told my readers I’d be interviewing you, so I’ll be mixing their questions in with mine.

KW: Congratulations on landing the lead in “Rush Hour”. Were you a fan of the film franchise?

JH: Absolutely! I grew up watching and studying those films. I’ve always been a huge fan of martial arts and comedy, so “Rush Hour” was the perfect combination for me.

KW: The trailer looks a lot like the first movie. How will the show be similar and how will it be different?

JH: The pilot episode is a reboot of the original “Rush Hour”. So, there are some similarities there. However, all the episodes after that, 13 episodes in total, tell completely new and exciting stories that are not connected with the “Rush Hour” films, at all.

KW: I think the key to the success of the film franchise was the chemistry between Chris Tucker and Jackie Chan. How did you and John Foo go about trying to regenerate that magic?

JH: I completely agree. Fortunately, I think Jon Foo and my chemistry is incredible! Foo is a genuine introvert and I’m a genuine extrovert. We’re the perfect ying and yang, on and off camera.

KW: Editor/Legist Patricia Turnier asks: How did you prepare to play Detective James Carter? Did you get any advice from Chris Tucker?

JH: I’ve been doing stand-up for a strong eight years and I’ve been the class clown my entire life, all of which prepared me for a role of this magnitude. Also, I watched all those buddy cop movies again: 48 Hours, Lethal Weapon, Bad Boys, etcetera. I didn’t get any advice from Tucker, but I assume his advice would’ve been, “Have fun and be funny!”

KW: Patricia also says: You are an actor, writer and comedian. Which of those endeavors is your favorite?

JH: I honestly love all three equally. Each of those have played a part in getting me to where I’m at in my career right now.

KW: Patricia has another follow-up: Who is your favorite comedian, and do you have a topic you won’t touch in a stand-up routine?

JH: Richard Pryor is the Godfather of Comedy. Eddie Murphy is the King. Martin Lawrence is my favorite. Chris Rock is the best. Dave Chappelle is a genius. Bernie Mac is the funniest. I’m a comedy nerd. And… rape is typically never funny.

KW: Sangeetha Subramanian says: Justin, is comedy like writing where an idea just pops in your mind at any given time? If so, what was the strangest occasion on which a joke came to you? :

JH: That’s a pretty accurate insight, Sangeetha. A funny idea might pop up in your head or you may see something that you think is funny–then you go to a comedy club, say that thought out loud, and see if everyone else finds it funny as well. Some of my funniest thoughts come to me while I’m taking a shower.

JH: Do I prefer Coke or Pepsi? My answer depends on which one wants to give me an endorsement deal one day. [LOL]

JH: Either telling my first joke in pre-school that got a huge laugh, or my mom rocking me to sleep in her rocking chair.

JH: Fear will keep you from accomplishing your dreams.

JH: I’m really quiet at home. I don’t speak that much. However, when I’m in public, I make sure to speak to everyone.

JH: Someone trying to achieve greatness.

JH: I turned down a contract with a major network in New York my senior year of college in order to move to Los Angeles and pursue my acting career. But so far it’s working out.

JH: The power of mind control. I’d be able to get pretty much everything I wanted.

KW: The “Realtor to the Stars” Jimmy Bayan’s question: What would be your dream locale to live in Los Angeles?

JH: Either Malibu or Calabasas.

JH: One of the reasons I started acting was to re-make The Karate Kid, but Jaden Smith beat me to it.

JH: Do your homework, study the craft, believe in yourself, and out-work everyone.

JH: He did what many thought was impossible.

KW: Thanks again for the time, Justin, and best of luck with the new show.

JH: Thank you very much, Kam.

To see a trailer for “Rush Hour”, visit: https://www.youtube.com/watch?v=cE_KzuQNQnU

Don Cheadle of “Brooklyn’s Finest”– Down with Don