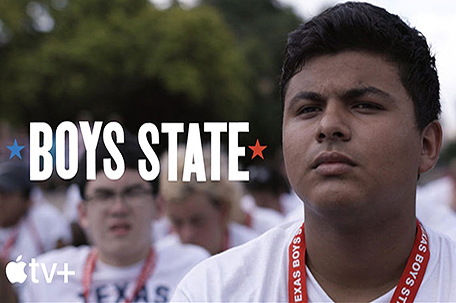 Each year, 1,000 high school students are selected to participate in a program sponsored by the American Legion leadership conference called Boys State.

During the week-long program, the students are divided into two parties —the Nationalists and the Federalists — and are given the opportunity to create their own political platforms and government.

Directors Amanda McBaine and Jesse Moss shared an in-depth look at the experience of a group of young men in Austin, Texas who participated in the program in the documentary “Boys State.”  The film, in collaboration with Apple TV+ and A24, won the Grand Jury prize at the 2020 Sundance Film Festival for its unique approach to highlighting the journeys of this diverse group of students. Four of the main characters in the documentary: Ben Feinstein, Steven Garza, Robert MacDougall, and René Otero, spoke with The Philadelphia Sunday SUN about their experiences.

The foundation of the “Boys State” experience involves creating a political platform that the participants want to see come to fruition. Feinstein shared how his love for politics began.

“It started with my education.” Feinstein said. “I grew up going to a military school where I was taught the value of the flag, armed forces and freedom. My views have grown over time, especially over the last two years. At a fundamental level, that respect for the United States is still there, that naturally branched out to a love for history… and history is politics.”

Similarly, Otero’s love for public speaking was developed through his upbringing in the Black church and by participating in speech debate — both of which helped to hone his abilities as a speechwriter.

“When I hit my sophomore or junior year, I was really into speech debate and I was learning about politics to apply to my arguments, he said. “That was the background I had coming into “Boys State.” I was very skilled at coming up with speeches in a short amount of time.”

The program’s participants  bring a wide array of skill sets and perspectives. Although Texas is known for its conservative base, Garza described his experience as a progressive.

“You are thrown into the lion’s den,” he said. “I was thinking, ‘almost every person here does not believe what I believe… how could I win an election here?’ I decided to find a unifying theme that I thought would bring together people from not only both parties, but all sides of the political spectrum. I’m going to run a pro Union, pro Texas campaign. I’m not going to talk about abortion, health care, LGBTQ, gun reform… none of the hot topics of the day. Then I got hit in the mouth and had to pivot my campaign.”

Even with the pivot in his campaign, Garza came out successfully on the other end, and was elected governor.

Although “Boys State” could be considered a “sandbox experiment,” creating a government in less than a week offered a very unique experience that was both challenging and edifying, Feinstein explained.

“It gives you a lot of independence and a lot of confidence in your ability to run something when it’s actually you running it and you’re not following a script,” he said.

“It was really fast and really intense,” MacDougall added. “I was really impressed that 1,000 young men could come together enough to build and elect a government It gave me a lot of doubt about those guys in DC who have been there 20 or 30 years who tell you, ‘vote for me this time and I’ll make some real change’… no, you’ve been there for 30 years and you haven’t done anything. We had new policies round the clock in 5 to 6 days.”

Boys State offered the freedom for students to openly share their perspectives. But some of that freedom took a turn for the worst, when a select few resorted to racist rhetoric as their platform. Otero shared his experience with racism in the program as a Black student.

“I didn’t know much about the program, but anytime I enter a space with a lot of people, I’m always prepared to deal with the racial push back,” he said. “I dealt with racial attacks, racial caricatures… I even got a lynching threat over an anonymous text message. These things are really difficult for me to talk about, because I discuss these things with other people and they never seem to be able to understand how it could be that bad.”

“Occupying a space where I was one of few Black bodies dealing with these things, meant that I constantly felt gaslighted when I spoke up about some of the racial attacks that I dealt with,” Otero continued. “Going through this experience I felt like I had an extra burden of proof for the Black community.”

Despite the poor decisions of some of the program’s participants, the overall message of unity — despite differences of political affiliation — rang true throughout the program. Feinstein spoke about the message of unity and clarified his original position that unity wouldn’t win elections.

“I don’t agree with it anymore,” he said. “To clarify, a message of unity if you don’t back it up with actions to create unity is useless, and I wasn’t wrong on that. I feel like so many presidents and politicians say that we need to be unified, but they don’t actually do anything to make that happen. Great unifiers actually do stuff to unify people, and that’s the kind of leader we need.”

The overall consensus about “Boys State” is that it was a once in a lifetime experience that offered lessons the participants will be able to utilize for a lifetime.

“I think that Boys State is an incredible program; there’s also a Girls State. Every man and young woman — if they have the opportunity to  — should go to their state’s program,” MacDougall said.

“I found my voice at Boys State,” Garza said.  “I found that I can get in front of a room, give a speech, win hearts and minds, run a message, defend my position and articulate clearly to an audience what I think and feel… that experience can’t be replicated.”

“The worldliest lesson that I learned from this program is how to approach other people, especially people who don’t agree with you” Otero added. “There’s an important amount of civility and respectability that ironically the program does teach its attendees.”

The “Boys State” documentary is  a riveting work and a one of a kind example of what is possible when young people are given the ability to create the world they want to see. “Boys State” will have its global debut on Apple TV+ on Friday, August 14.