A conversation with one of Philadelphia’s rising rap music groups, Highest Basement Collective 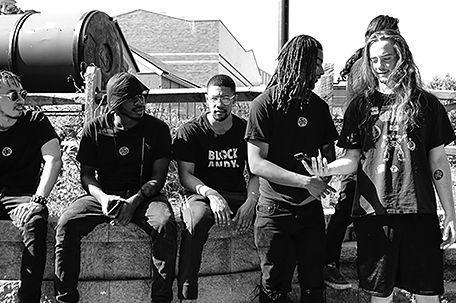 ABOVE PHOTO: courtesy of HBC

The SUN recently sat down for an interview with members of the rap group, the Highest Basement Collective —  or HBC for short– about music, the collaborative process, and the importance of friendship.

SUN: Rap duos and groups were all the rage for a while, but seemed to have completely fizzled out over a decade ago. Now fast forward to 2020, and here you are, revitalizing the trend but in such a unique way.Tell us about the inspiration behind HBC.

Tawobi: I met Moses in junior high, and he was the only person I’d ever met that was as serious about music as I was. The school we went to had some Macs, mics and tools to record school plays and concerts, but since it all rarely got used, they let me and Mo have full reign of it to make music in the lab whenever there wasn’t a class. We knew we wanted to get a collective of artists together from the jump, but no one ever stuck around. I met Riley and Sheed, Jr. [during the]year of high school when I changed schools, and they were just as serious as me and Mo were. They’d even begun [to] build a studio in their friend’s basement, on like, the first day of school.

Sheed: First thing I ever said to Tawobi was that he looked like he rapped and we just connected, then he introduced Moses to us (Sheed and Riley). And from there, it was really the four of us, until we brought Trip in around 2015.

Moses: This all started in middle school. I met Tawobi when he came to my school at the time and we bonded over our mutual passion for music. We ended up making an album for a school project and neither of us stopped. Beginning in high school, Wobi introduced me to Sheed and Riley who were making music too and we decided to join forces to form HBC.

L. Trippy: I moved to South Jersey in 2011, and Sheed was close with my boys back in Philly and Montgomery County, so every time I came back over the bridge, we would chill and make music. HBC was in its final stages of start up when I officially joined, and we’ve been growing and becoming larger in the city.

SUN: HBC is one of the only music collective groups that I’ve seen last so long. What’s the secret to maintaining solidarity when there are so many personalities involved?

Sheed: The members of HBC are family, so we treat each other as such. We make sure anything that needs to be addressed is said so that way it can be settled. We also just make sure we’re good mentally which is important in any group trying to establish themselves in the industry.

Moses: This works because it’s always been about more than the music. We’ve all invested a lot into our personal and collective success. I think we all genuinely believe this is something that is going to lay a foundation for others, we recognize this is something important and conduct ourselves as such.

SUN: It seems that you guys have a lot of fun when you’re together! Do you ever separate work from play or are the two always intertwined?

Sheed: With me in particular, creating is the fun part. Some songs are just products of me hanging out with my friends and taking their energy and using it to make a song. I think one of the great things we do here is we don’t take ourselves too seriously and that translates into a lot [of] music.

L. Trippy: The work is fun because we use our natural talents, and getting better the more we use them. The real work isn’t in making the music, but more so in coming up with ideas for rollouts, preparing video treatments, setting show dates, creating single promotions, coordinating blog posts, and more. To be honest, actually making music is one of the few fun parts of it all, to me.

SUN: In your opinion, why is it imperative to operate and create in a space such as the one you all have created together? And how has your bond/relationship influenced the music you’ve created?

Sheed: At HBC, we pride ourselves on honesty and freedom. As artists, we are honest with each other and try to help each other with our craft as much as possible. We all want to see each other win and I think why the music comes out the way it does.

Tawobi: Having a family that also operates means you have people around that know your art and more importantly, know you. Being able to come together for big moves is important. If it wasn’t for all of us together, we wouldn’t have our living and studio situations at the place they’re at right now.

SUN: Is it ever hard to find your individualism in a group of this caliber? I mean, I assume that you’re all independent, but does being together so frequently ever cause strife or create tension since you are constantly working together, but also have your own ideas and identities as well?

Moses: If anything, being a part of a group like this forces us to focus on what makes us unique and ultimately helps us grow. We bounce a lot of ideas off of one another. Steel sharpens steel, so having other creative minds around you really pushes you to to be more unique, more potent.

L. Trippy: Beside the fact we are creatives, I think the music shows our differences well, but seeing us out at events, or even noticing the differences between each individual artist’s stage presence allows people to see how each unique artist is. All the artists in the collective make up the Highest Basement Collective.

SUN: Was the bond you guys share a natural occurrence or did reaching that level of compatibility take some time and restructuring?

Moses: I think this was predestined. We’ve all met many people over the years that have been doing music with the same tools as us, but there’s very few still operating at this level or have grown how we have.We’re all invested in this long term. We’re all here still because we keep showing up for our dreams.

Tawobi: Everything takes time. We’ve all been living together and bouncing around West Philly since the start of our 20s. There’s a lot of learning and growth that comes with that. But the spark was natural. Us coming together is no coincidence.

SUN: Where can we find you on social media?

Labelle, Jill Scott and other notables inducted into Philadelphia Music Walk of Fame