A chat with Jeremy Renner and Michael K. Williams stars of “Killing The Messenger” 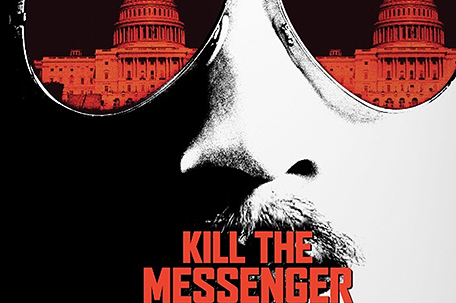 Two-time Academy Award nominee Jeremy Renner (“The Bourne Legacy”) leads an all-star cast in a dramatic thriller based on the remarkable true story of Pulitzer Prize-winning journalist Gary Webb. Webb stumbles onto a story which leads to the shady origins of the men who started the crack epidemic on the nation’s streets…and further alleges that the CIA was aware of major dealers who were smuggling cocaine into the U.S., and using the profits to arm rebels fighting in Nicaragua. Despite warnings from drug kingpins and CIA operatives to stop his investigation, Webb keeps digging to uncover a conspiracy with explosive implications. His journey takes him from the prisons of California to the villages of Nicaragua to the highest corridors of power in Washington, D.C. – and draws the kind of attention that threatens not just his career, but his family and his life.

On Indiewire, writer Greg Cwik talks with Jeremy Renner about ‘Kill the Messenger’

Jeremy Renner may be known to the mainstream filmgoing world as Hawkeye and that guy from the Bourne movies who isn’t Matt Damon, but there’s more to the man than big biceps and billion-dollar box office draws. Since earning ubiquitous acclaim for his searing turn in Kathryn Bigelow’s The Hurt Locker, Renner has been steadily building a body of work comprised almost equally of big-budget action flicks and smaller, intimate films, such as this year’s beautiful The Immigrant. In Kill the Messenger,” which he also produced, Renner plays investigative journalist Gary Webb, who cracked the story of the CIA’s role in the crack cocaine epidemic of the Reagan Era. Webb’s life was subsequently destroyed by treachery and denial, as the powers that be sought to silence and discredit him. He killed himself in 2004. 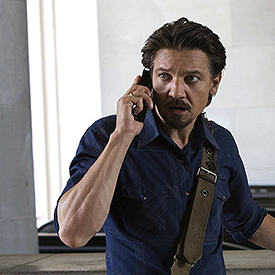 So what’s going on with you?

Nothing much, man. Just happy to be here in New York, getting out of Africa. Love the big city, man. Nice change of weather from hot ol’ Africa, too.

You not only star in Kill the Messenger, but you produced it, too, and you were integral to its inception. What drew you to this project?

It was the great script that I bought, and I read the books it was inspired by. The more information I got on Gary’s Webb’s plight, which went down near my home, the more interested I was. I knew very little about it, but it very quickly went from a movie I wanted to do to a movie I had to do. I just had to tell the story.

You’ve worked with Michael Cuesta before. What’s your working relationship like?

Mhmm, yeah this is the third or fourth time we’ve worked together. It was perfect timing for him and for me to get together. He was just coming off of “Homeland,” and that’s when I was like, “Wow, the energy of that show, it would be great for ‘Kill the Messenger.’” Great stuff, I love working with him so much.

Cuesta makes prolific use of intimate handheld shots throughout the film, getting right up close to you. Is it weird having a cameraman running around you in circles with a handheld camera?

For me, it’s great cause I like movies that are subjective, and I understand what that means, with the camera, and what he’s trying to do. I’m there doing what I got to do, and he’s just trying to capture it. We understand each other, and we stay out of each other’s ways, give each other room whenever we can. It’s a great working relationship, amazing.

How do you balance doing all your blockbuster franchises with the “serious,” more intimate dramas like “The Immigrant” and “Kill the Messenger?”

I feel like the big movies allow me to do the smaller movies. It helps me finance those — no one’s throwing money at The Immigrant, no one’s throwing money at Kill the Messenger, these are all great pieces of cinema that should be filmed. It’s just finding time between the big ones to slip in one for me, kinda thing. I’m very fortunate that I have some big movies to do, and I can pick and comb through the small ones.

Is it nice, with roles in these smaller films, that you get to take a break from your prodigious workout regime and diet?

[Laughs] Yeah! Normally I have to stretch for an hour before I can go to work. With Kill the Messenger I didn’t have to do much stretching. It’s not a physical challenge as much as it is a spiritual challenge.

Can you elucidate on what a “spiritual challenge” it was?

It takes a lot out of me. The emotional anguish, sort of makes me step back and consider my own thoughts on the state of where we are as people. It’s a much bigger thing for me than just saying some lines, or kicking some butt. Requires a lot more thought and feeling.

Do you think the film has a political ideology or theme it, trying to present some message, since you’re the messenger? Or is it just an objective recreation of Gary Webb’s life?

We wanted to be as accurate as we could to Gary Webb’s life, I just thought it was our duty. It just happens to be a relevant topic now, only now I can pull back and think, “Wow, this is a good commentary on us as people, on the mean and salacious sensationalism of media, not reading and paying attention to really good investigative reporting.” Then there’s the whistle-blowing aspect, and social media. Really all of that is under the second amendment, the freedom of speech. How beautiful and powerful that is. How lucky we are to have that.

Did you run into any challenges during filming, the way Gary Webb did while writing his article? I assume the CIA didn’t try to sabotage you or anything.

I don’t think anybody got too upset, or at least I didn’t hear about it personally, but there are some sort of things done, people stating their point, but no one came after me or anything.

In Kill the Messenger  you get a lot of respected actors to pop up in smaller roles. Was recruiting actors part of your producer duties?

Yeah, man, I reached out to a lot of people, actually. That was the biggest part of my role as producer. My responsibility was to do the best I can to grab the best possible cast. And we had a great casting director, as well. It was all about getting on the same page for who’s the best person for the role. Ultimately it’s like throwing it out there and seeing what sticks, and ultimately I feel like the people that ended up in the roles were the people that needed to be in those roles. Couldn’t be happier. I mean that cast is tremendous. I was threatening to wash a lot of cars and do laundry to get them to come, but ultimately it ended up being a smoother ride than I anticipated. Just scheduling issues, but thank goodness we were able to massage and say, “Okay, this is only one day a week here, and there,” and also people really like the content. I didn’t have to scream too hard, too loud to get them to come work on something like this. Ray Liotta, I’ve known him since The Hurt Locker, we have the same manager. He came in cause he just wanted to work with good people, on good material. He was very passionate about the story. I don’t wanna say he was easy to get, but we were so fortunate to have him. I just like to let the work speak for me.

How does one uncover the real man once labeled as one of LA’s most notorious drug dealers?

We sat down with acclaimed actor Michael K. Williams to discuss how he prepared for his role as “Freeway” Ricky Ross in the upcoming film, Kill the Messenger.  The real-life drama, which stars Jeremy Renner as journalist Gary Webb, delves into the murky world of cocaine trafficking in the 1980s. 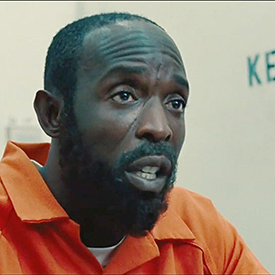 Michael, you portray a very notorious cocaine dealer, ‘Freeway’ Ricky Ross, in the film.  Can you tell me a little bit about how you approach a character who people might be quick to write off as a criminal or a drug dealer?

You know, I played him from the truth, from the perspective of the truth.  The system failed him.  This was a man who had aspirations to become a professional tennis player, and was allowed to go through the LA school system uneducated.  And when he was approached about the possibility of a scholarship for tennis, they found out he was illiterate, and he lost everything.  So this is a young black man, 18-years-old, he’s in an underserviced community of Los Angeles, no education, no money, no opportunities.  And allegedly–which is what the movie speaks about–the government just flooded his community with crack cocaine.  So the question that I ask is, What would you do?  That’s the real question.  You know, I’m not excusing, I’m not condoning, you know, illegal drug selling or transactions, but, you know, in the same token, cocoa leaves are not made, are not grown in Los Angeles.

Did you have the chance to meet with Ricky Ross at any point during the filming or before the filming?

Absolutely.  I met him.  Actually, I consider him a friend now.

Yeah.  You know I was real ignorant to the whole Gary Webb thing.  I had never heard of him; I didn’t know about this story.  And I was, you know, hogwashed, I guess like a lot of Americans were, in regards to this topic.  And so I’m reading the script, and it’s a good story, really good story.  I’m like, Well, wait a minute, this is almost too good to be true.  So I called a friend of mine in LA, and I’m like, well, I said, Michael, have you ever heard of a guy named Gary Webb?  Is Gary Webb a real person?  And he was like, Are you kidding me?  You don’t know about this?  And he educated me, and he said, Do you want to speak to Rick Ross?  And I was like, Are you kidding me?  Of course!  And he put us in contact, and it was through the conversation with Rick, and he was so kind and so forthcoming to me with information that he gave me–websites and interviews to watch and to update myself about his path.  And through that I got to get a sense of his demeanor, his character: A very mild mannered, gentle human being.  You know, Rick Ross could have been anything in life had he been given the proper opportunities and had the proper education.  He could have been President Ross.  You know, he had that type of spirit and that type of mentality.  It’s just unfortunate that he was uneducated, academically speaking, and he lived in a community where there was nothing else to do but to sell crack.

So the system failed him, in a way.