A changing of the guard at The Mann 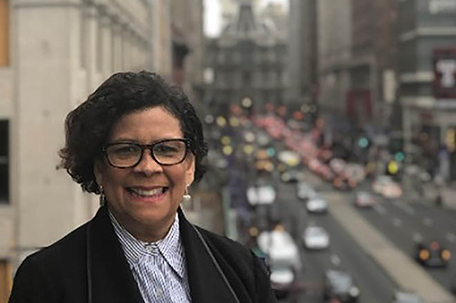 With the successful completion of its most recent capital campaign and $11 million of renovations now in place in the ready-to-open pavilion of the Mann Center for the Performing Arts, executive vice president Nancy Newman assessed that the time was right to do what she’d been thinking about for a few years.  Newman announced her retirement late last week to her colleagues and the Mann’s wide network of friends and supporters.

“After 20 years, I am stepping down from my position as Executive Vice President at the Mann effective later this summer.  These years, working on behalf of one of Philadelphia’s most treasured cultural institutions, have been very special ones for me both personally and professionally. In addition to presenting great performances, we have worked to create a sense of place at the Mann where all of our donors and patrons feel welcomed and ‘at home,’” Newman wrote.

It was important to both Newman and Mann president and CEO, Catherine M. Cahill, that a transition be seamless to continue the momentum of this work.  Cahill says they have achieved that objective with the hiring of Joan Roebuck-Carter as senior vice president of Institutional Advancement.  Roebuck-Carter, who comes to the Mann from the Kimmel Center, will begin her tenure on June 3, 2019.

A skilled and passionate fundraising veteran with 20 years of experience, Roebuck-Carter has served as senior director of development and institutional support at the Kimmel Center for more than eight years. During her time at the Kimmel Center, she revived the Kimmel’s corporate giving program and helped lead efforts to raise $25 million in funds from corporations, foundations and government entities.

“It is a bittersweet moment for me, personally and professionally, as we celebrate all that Nancy Newman has been to the Mann throughout her career here. She leaves the Mann on very solid footing and will continue to serve in an advisory capacity through 2019,” Cahill said.  “This change is made easier, though, through our very good fortune of being able to welcome Joan Roebuck-Carter to our team.  Joan has a successful track record of driving fundraising results, fostering long-standing donor relationships and leading teams that continually exceed fundraising goals,” she said.

Prior to working in development, Roebuck-Carter had a successful career in television production starting in TV news in Pittsburgh and later serving as senior associate producer at the Oprah Winfrey Show.  Her television career helped her identify her creative talents and hone her resilience by producing stories seen by millions of people on a regular basis.  She transitioned into fundraising for the arts at the Philadelphia Museum of Art in 1998.  Then went to become the vice president of development at the Allendale Association in Illinois, where she fulfilled her personal passion for supporting kids, in this case raising funds in support of programs for underserved and abused children.

“I am grateful to have experienced a dual career that allows me to explore my personal and career interests, which is why I’m thrilled to begin my work with the team at the Mann. I have always admired the Mann as a unique treasure to our region and have enjoyed learning more about its commitment to Philadelphia and its embrace of the West Philadelphia community where it resides,” said Roebuck-Carter.  “The Mann gives us all a special place to enjoy the best music in a beautiful outdoor setting. But the Mann is also busy year-round, making inroads within communities throughout Philadelphia via its education initiatives and world class programming. In learning more about the Mann, I have also come to better understand and greatly appreciate the organization’s intentional commitment to diversity and inclusion and its sense of community,” she said.

Philadelphia Celebration of Gospel At The Mann

The O’Jays, The Four Tops & The Stylistics come together for Special Night at the Mann

The Changing Of The Guard?