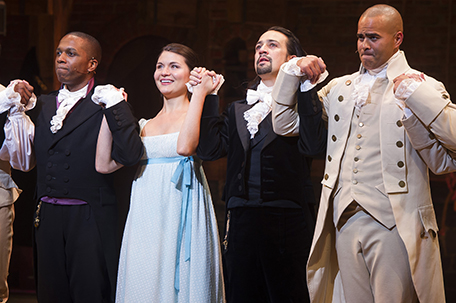 ABOVE PHOTO:  In this Thursday, Aug. 6, 2015, file photo, Leslie Odom Jr., from left, Phillipa Soo, Lin-Manuel Miranda and Christopher Jackson appear at the curtain call following the opening night performance of “Hamilton” at the Richard Rodgers Theatre in New York. Fans of Broadway gave producers reasons to smile this Christmas, with 18 of the current 37 shows breaking the $1 million mark for the week, led by “Hamilton,” the new Andrew Lloyd Webber musical “School of Rock _ The Musical” and Disney’s “Aladdin” and “The Lion King.” (Photo by Charles Sykes/Invision/AP, File)

NEW YORK — The Rockefeller Foundation says it is giving $6 million to help 100,000 school children across the U.S. see the Tony Award-winning musical “Hamilton.”

The foundation said Thursday the funding would allow students as some schools in Chicago, Los Angeles, San Francisco and the District of Columbia to see the show for $10. Plans are already in the works to open a Chicago company of “Hamilton,” as well as one for London and a U.S. national tour that starts on the West Coast.

The students will attend special matinee performances and interact with cast members during the program.

The additional funding follows a 2015 pilot program that provided a $1.5 million grant for 20,000 New York City school children to see the Broadway sensation.