$56 million restoration of the Philadelphia MET completed: Bob Dylan and his band perform on reopening night 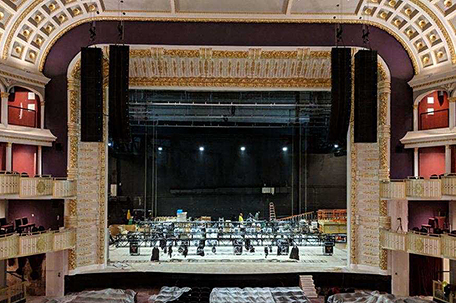 ABOVE PHOTO:  The Met

Philadelphia, PA- The Philadelphia Metropolitan Opera House, built in 1908 by Oscar Hammerstein, reopened on Monday with a sell-out performance by Bob Dylan and his band, after being shuttered for over 20 years. What started with a signature $3 million pre-development Loan from Procida Funding in 2015 to complete environmental remediation, architectural design, structure drawings, and other pre-development work, evolved into a $56 million financing package orchestrated by Procida Funding for developer, Eric Blumenfeld, and his partner, the Rev. Mark Hatcher of Holy Ghost Revival Center at The Met.

“This is one of the greatest projects we have ever been involved with, as well as the most complicated financial structure in my 37- year-career. And coming in ahead of schedule and on budget to restore this grand landmark makes it all the better.” said Billy Procida.

“Following our formalized collaboration with Eric Blumenfeld, developer of The Met, I prayed to God for the financial resources to fulfill our portion of the fiscal component of this huge restoration. God sent Billy Procida from Englewood Cliffs, New Jersey!” Hatcher said.

“The past six years Billy Procida and Procida Funding have been at my side, providing capital, guidance, advice, and inspiration. This truly would not have been possible without them,” Blumenfeld said.

The project is leased to Live Nation who will operate it as a venue for concerts and events. Signage rights for The Met were sold to Citibank.

This is the fourth project on North Broad by developer Eric Blumenfeld and Procida Funding. The collaborations between Blumenfeld and Procida have totaled over $150 million, which has spurred an equal amount of additional new development. Construction was handled by Domus Construction, architectural design by AOS Architects, and structural engineering by David Chou & Associates, Inc. Procida and Blumenfeld will soon announce the first Opportunity Zone project on North Broad, which will be a mixed-use building on the corner of North Broad and Spring Garden.