30 minutes of ‘Spider-Man 2’ shown at CinemaCon 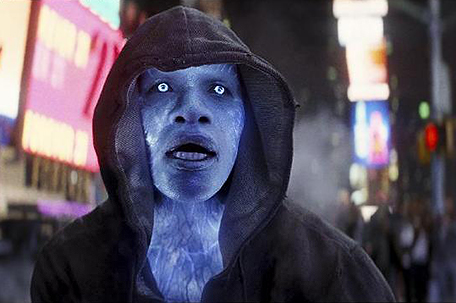 Cut into multiple segments, a packed house at Caesars Palace previewed scenes explaining the death of Peter Parker’s parents, played by Campbell Scott and Embeth Davidtz, and the rekindling — after about a year of silence — of Parker (Andrew Garfield) and Gwen Stacy (Emma Stone) as they graduate from high school.

The pair’s chemistry is still as strong as ever.

The meeting of Spider-Man and Max Dillon, played by Jamie Foxx, who becomes Electro, is introduced, and the audience became acquainted with the character Harry Osborn (Dane DeHaan), later the Green Goblin, as he bonded with Electro over feeling lonely and neglected.

Introduced by Sony’s president of worldwide distribution, Rory Bruer, trailers from a number of other films from the studio’s upcoming slate were also previewed.

— “Sex Tape,” directed by Jake Kasdan and starring Cameron Diaz and Jason Segel. Diaz and Segel reunite for the first time since 2011’s “Bad Teacher” to play a couple who tapes themselves having sex and accidently sends it out to all of the folks they gifted iPads to via their iCloud.

— “Think Like a Man Too,” directed by Tim Story and starring Kevin Hart, Gabrielle Union, Taraji P. Henson and Jerry Ferrara. The couples spend time in Las Vegas for a wedding, as a big battle of sexes ensues.

— “The Interview,” directed by Seth Rogen and Evan Goldberg, and starring Rogen and James Franco, who play a pair of unlikely buddies asked by the CIA to assassinate Kim Jong Un, dictator of North Korea.

— “The Equalizer,” directed by Antoine Fuqua and starring Denzel Washington as a former black ops commando who comes up against Russian gangsters when trying to save a young woman, played by Chloe Grace Moretz.

— “Fury,” directed by David Ayer and starring Brad Pitt, Shia LaBeouf, Logan Lerman and Michael Pena. Pitt plays a poker-faced sergeant commanding a crew of U.S. soldiers in the 1940s. But the trailer sets Lerman up as the one to watch.

— “Annie,” directed by Will Gluck and starring Cameron Diaz, Jamie Foxx and Quvenzhane Wallis. Diaz plays mean foster mom Miss Hannigan and Wallis is Annie. After all of the anticipation for this remake — produced by Jay-Z, Will Smith and Jada Pinkett Smith — the crowd of theater owners seemed far from impressed.

— “22 Jump Street,” directed by Phil Lord and Christopher Miller, and starring Channing Tatum and Jonah Hill. This time, they must go undercover at a college to take down a drug dealer.

From the Set: Kevin Hart and the Cast of Think Like a Man Too