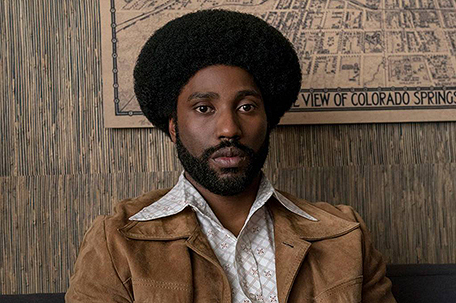 LOS ANGELES — John David Washington comes from a strong acting lineage, but he has carved out his own identity as a powerful actor, earning a Golden Globe nomination and generating Oscar buzz for his standout role in Spike Lee’s “BlacKkKlansman.”

In his first starring role, Washington played a black police officer in Colorado who infiltrated the Ku Klux Klan in the late 1970s. The actor received praise for his portrayal of the gigantic Afro-wearing undercover officer, who notably used a “White voice” during his racist exchanges in scenes with a KKK grand wizard over the phone.

Washington credits Lee for choosing him for his acting abilities, and not because he’s the son of Oscar-winning actor Denzel Washington and Pauletta Washington, his actress-mom.

“It’s just a compliment that (Spike Lee) believed in my ability,” said the actor, who is the eldest of the couple’s four children. “I didn’t feel pressured. I felt encouraged. (Lee) exemplified the true meaning of trusting your teammate. … It was so liberating as an artist. It gave me the confidence I didn’t realize I needed.”

Along with “BlacKkKlansman,” Washington made a few other big screen appearances in 2018, starring in “Monsters and Men,” a film where he played a conflicted police officer who witnesses racism among his colleagues. He also appeared in the drama “Monster” and “The Old Man & the Gun,” featuring Robert Redford, Casey Affleck and Danny Glover.

Washington’s success on the big screen comes while he continues to star as Ricky Jerret on HBO’s TV series “Ballers.” The 34-year-old actor said he is living out his “childhood dream,” but says the hard work must continue.

“(It’s) like go back to the gym and work on different aspects of your game. It’s like I’m on the right career path. This is what I should be doing for the long run,” he said. “I can’t wait to keep growing as an artist.”

He’s also proud to keep up the strong reputation of the Washington family name in Hollywood while striking out on his own.

Blacktrospective 2018: Kam’s Annual Assessment of the Best in Black Cinema