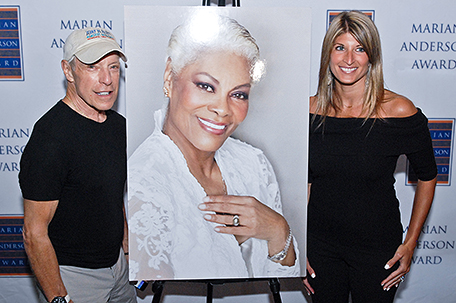 Philadelphia Mayor Jim Kenney announced today that five-time Grammy winner Dionne Warwick will receive the 2017 Marian Anderson Award on November 14, 2017, during the eagerly anticipated Gala and Concert at The Kimmel Center for the Performing Arts. An internationally renowned pop music icon, Warwick’s career has spanned over 50 years. The Marian Anderson Award was created to celebrate critically acclaimed artists who have used their talents for personal artistic expression and/or whose body of work has contributed to our society in a positive and singular manner.

“We are pleased to honor Dionne Warwick with the 2017 Marian Anderson Award,” Mayor Kenney said. “She is a perfect example of an artist whose incredible talent and extensive accomplishments closely align with the achievements of Marian Anderson herself.”

Warwick first displayed her talent as a child singing in her church in East Orange, New Jersey. In 1961, she was discovered by songwriting team Burt Bacharach and Hal David, and has been astonishing crowds ever since with her masterful blend of pop, gospel and R&B music styles. To date, she has had 18 consecutive top 100 singles, 60 charted hit songs, and 20 best-selling albums. Warwick became the first African-American solo artist of her generation to win the highly-esteemed “Best Contemporary Female Vocalist Performance” award, and her recorded performances have been honored with five Grammy awards. Having more than 100 million records sold, Warwick is a cornerstone of the American music industry.

Over the years, Warwick has made it her mission to support many philanthropic campaigns, including the battle against HIV AIDS and world hunger, disaster relief efforts and children’s hospitals, and countless other causes. Perhaps most notably, Warwick has been recognized as a champion of music education for which she has raised millions of dollars. To show appreciation for her dedication to education, The Dionne Warwick Institute in New Jersey was named in her honor. Other charitable interests include serving as an Ambassador for the United Nations’ Food & Agriculture Organization (FAO), hosting an annual benefit concert for World Hunger Day in London, and participating in the allstar charity single, “We Are the World.”

“I have received many awards during my 55 years in this entertainment industry and treasure each of them, however, I have to say, to have been considered worthy enough to receive the Marian Anderson Award, has left me speechless!” Warwick said, “I am honored, flattered, and overwhelmed with absolute joy, and cannot thank those who felt that it was I to be the one to receive this very distinguished award enough, and will try to live up to all that gave thought to my receiving this enormous honor. And a special thank you to my good friend, Jerry Blavat.”

For tickets to the Gala Concert, go to: https://www.kimmelcenter.org/events-and-tickets/201718/kcp/marian-anderson-award-2017/

Visit www.marianandersonaward.org and https://www.kimmelcenter.org for more information about the organizations.