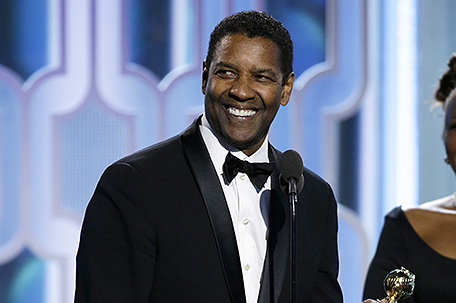 ABOVE PHOTO: Denzel Washington accepts the Cecil B. Demille Award  at the 73rd Annual Golden Globe Awards at the Beverly Hilton Hotel in Beverly Hills, Calif., on Sunday, Jan. 10, 2016. (Paul Drinkwater/NBC via AP)

The Revenant and The Martian both won Golden Globes for Best Picture and Best Actor (Leonardo DiCaprio and Matt Damon, respectively) setting up a big showdown between the two at the Academy Awards on Sunday, February 28th. The Revenant took home its trophies in the dramatic categories, while The Martian earned its accolades as either a comedy or a musical, take your pick.

Ricky Gervais served as emcee for the first time in three years, replacing his trademark acerbic snipes at celebs with a profusion of profanity. His alcohol-fueled affinity for cursing set the tone for a night featuring a flurry of foul-mouthed remarks on the part of presenters and awardees. The problem with that approach is that it resulted in the bleeping of large chunks of dialogue, so the TV audience often had no idea what just transpired beyond being able to lip-read the F or S-word. 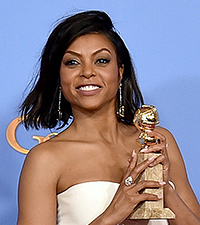 Taraji P. Henson poses in the press room with the award for best performance by an actress in a TV series – drama for “Empire” at the 73rd annual Golden Globe Awards on Sunday, Jan. 10, 2016, at the Beverly Hilton Hotel in Beverly Hills, Calif. (Photo by Jordan Strauss/Invision/AP)

The most memorable moment was when Taraji P. Henson handed out cookies as she headed onstage to accept the Best Actress in a TV Drama nod for playing Cookie on “Empire.” Another highlight was Denzel Washington’s standing ovation from his colleagues for his lifetime achievement award. 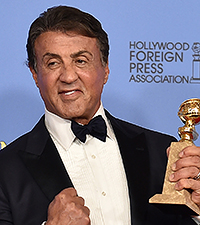 Sylvester Stallone poses in the press room with the award for best performance by an actor in a supporting role in a motion picture for “Creed” at the 73rd annual Golden Globe Awards on Sunday, Jan. 10, 2016, at the Beverly Hilton Hotel in Beverly Hills, Calif. (Photo by Jordan Strauss/Invision/AP)

Stallone was greeted with an equally-heartfelt reception when he won for Best Supporting Actor for Creed. However, it was unfortunate that the director decided to cut to a commercial during his protracted acceptance speech, so only the audience in attendance got to hear him thank Creed’s star, Michael B. Jordan, and director, Ryan Coogler.

As for the evening’s lowlight, it had to be Gervais’ heavily-censored exchange with Mel Gibson making references to the disgraced thespian’s anti-Semitism. Talk about cringe-inducing!

Animated film: Inside Out

Original song: “Writing’s on the Wall” from Spectre

Best series, comedy or musical: “Mozart in the Jungle” (Amazon)