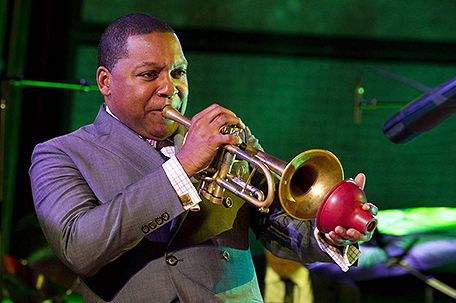 Performers that evening include Misty Copeland, who recently became the first African American woman to be named a principal dancer at American Ballet Theatre. Copeland will perform a new work choreographed by Robert Garland, Philadelphia native and Resident Choreographer with the Dance Theatre of Harlem. Three-time Emmy winner Bill Jolly will serve as music director, and Lalah Hathaway, two-time Grammy Award winner, and Kim Burrell, Gospel superstar and three-time winner of the Stellar Award, will celebrate Marsalis with vocal performances. At the concert’s conclusion, Marsalis will take the stage, reuniting with his original septet.

It will be a night to remember!

“The Board of the Marian Anderson Award could not be more honored to host such acclaimed artists in Philadelphia for the celebration of the musical achievements and educational work of Mr. Marsalis,” says Marian Anderson Award Board Chair Nina C. Tinari. “We are expecting a sell-out crowd for this year’s Gala Concert.”

As a nine-time Grammy winner, National Medal of Arts Award recipient, and the first jazz musician ever to win an esteemed Pulitzer Prize for Music, Marsalis is one of the world’s most celebrated leaders in the performing arts community. Marsalis’ work on and off stage honors Jazz and its transcendent, democratic, and uniquely American value system. Achievement, service, community, and swing are all hallmarks of Marsalis’ broad footprint on the world’s cultural landscape.

The most famous jazz musician since 1980, Wynton Marsalis has had a major impact on jazz almost from the start. In the early ‘80s, it was major news that a young and very talented black musician would choose to make a living playing acoustic jazz rather than fusion, funk, or R&B. Marsalis’ arrival on the scene started the “Young Lions” movement and resulted in major labels (most of whom had shown no interest in jazz during the previous decade) suddenly signing and promoting young players. There had been a major shortage of new trumpeters since 1970, but Marsalis’ sudden prominence inspired an entire new crop of brass players. The music of the mid-’60s Miles Davis Quintet had been somewhat overshadowed when it was new, but Marsalis’ quintet focused on extending the group’s legacy and soon other “Young Lion” units were using Davis’ late acoustic work as their starting point.

Marsalis’ trumpet playing has been both over criticized and (at least early on) overpraised. When he first arrived on the scene with the Jazz Messengers, his original inspiration was Freddie Hubbard. However, by the time he began leading his own group, Marsalis often sounded very close to Miles Davis (particularly when holding a long tone), although a version of Davis with virtuosic technique. He was so widely praised by the jazz press at the time (due to their relief that the future of jazz finally seemed safe) that there was an inevitable backlash. Marsalis’ sometimes inaccurate statements about jazz of the ‘70s and the avant-garde in general made some observers angry, and his rather derivative tone at the time made it seem as if there was always going to have to be an asterisk by his name when evaluating his talents. Some listeners formed permanent impressions of Marsalis as a Miles Davis imitator, but they failed to take into account that he was still improving and developing. With the 1990 recording “Tune in Tomorrow,” Marsalis at last sounded like himself. He had found his own voice by exploring earlier styles of jazz (such as Louis Armstrong’s playing), mastering the wah-wah mute, and studying Duke Ellington. From that point on, even when playing a Miles Davis standard, Marsalis had his own sound and has finally taken his place as one of jazz’s greats.

The son of pianist Ellis Marsalis, the younger brother of Branford and the older brother of Delfeayo and Jason (the Marsalis clan as a whole can be accurately called “The First Family of Jazz”), Wynton (who was named after pianist Wynton Kelly) received his first trumpet at 6 from Ellis’ employer, Al Hirt. He studied both classical and jazz and played in local marching bands, funk groups, and classical orchestras. Marsalis played first trumpet in the New Orleans Civic Orchestra while in high school. He went to Juilliard when he was 18 and in 1980 he made his first recordings with the Art Blakey Big Band and joined the Jazz Messengers

By 1981, the young trumpeter was the talk of the jazz world. He toured with Herbie Hancock (a double LP resulted), continued working with Blakey, signed with Columbia, and recorded his first album as a leader. In 1982, Marsalis not only formed his own quintet (featuring brother Branford and soon Kenny Kirkland, Charnett Moffett, and Jeff “Tain” Watts), but recorded his first classical album; he was immediately ranked as one of the top classical trumpeters of all time. His quintet with Branford lasted until late 1985, although a rift developed between the brothers (fortunately temporary) when Branford finally quit the band to tour with Sting’s pop group. By that time, Wynton was a superstar, winning a countless number of awards and polls.

Marsalis’ next group featured pianist Marcus Roberts, bassist Robert Hurst, and drummer Watts. Over time the group grew to become a four-horn septet with trombonist Wycliffe Gordon, altoist Wes Anderson, Todd Williams on tenor, bassist Reginald Veal, drummer Herlin Riley, and (by the early ‘90s) pianist Eric Reed. Marsalis really developed his writing during this era (being influenced by Duke Ellington) and the septet proved to be a perfect outlet for his arranging. Although Marsalis broke up the band by 1995, many of the musicians still appear in his special projects or with the Lincoln Center Jazz Orchestra.

In 1997, Marsalis’ marathon “Blood on the Fields” (which was released as a three-CD set) became the first jazz-based work to win a Pulitzer Prize. “Standard Time, Vol. 5: The Midnight Blues” followed a year later. With the passing of so many jazz giants, Marsalis’ importance (as a trumpeter, leader, writer, and spokesman for jazz) continued to grow. “Standard Time, Vol. 4: Marsalis Plays Monk” followed in 1999 to coincide with the popular PBS special. Then, as if eight proper recordings in 1999 weren’t enough, Columbia and Marsalis released an amazingly affordable seven-disc set entitled “Live at the Village Vanguard.” Mid-2000 saw the release of “Marciac Suite” and “Goin’ Down Home.” Two years later, Marsalis celebrated the blues on “All Rise.” Next up was his first album for Blue Note, “The Magic Hour,” an album of original material released early in 2004. Later that year, the label released Unforgivable Blackness: The Rise and Fall of Jack Johnson, Marsalis’ soundtrack to a Ken Burns documentary. Marsalis’ second studio effort for Blue Note, the politically and socially aware “From the Plantation to the Penitentiary,” followed in 2007.

In 2008, Marsalis teamed up with country icon Willie Nelson for the live album “Two Men with the Blues,” which featured the duo performing over a two-night stint at Lincoln Center. The following year, Marsalis released the concept album He and She in which he explored the theme of relationships between men and women. In 2011, he returned with the live album “Here We Go Again: Celebrating the Genius of Ray Charles,” which once again paired him with Nelson as well as vocalist Norah Jones. Also in 2011, Marsalis, who had previously guested on guitarist Eric Clapton’s 2010 album Clapton, again paired with rock/blues master for the concert album “Play the Blues: Live from Jazz at Lincoln Center.” Marsalis also contributed the score to Burns’ 2011 documentary, Prohibition.