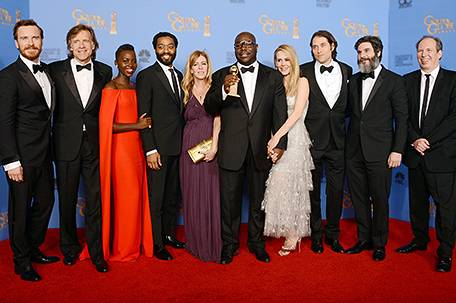 Going into the event, Hustle and 12 Years a Slave shared all the Oscar buzz by virtue of their having landed the most Golden Globe
nominations (seven each). But 12 Years has definitely now lost momentum, despite prevailing in the coveted Best Picture (Drama) category only.

As for the show, emcees Fey and Poehler again proved to be more celebrity-friendly than their relatively-irreverent predecessor, Ricky Gervais. The pair’s
tongue-in-cheek brand of humor ranged from Fey’s praise of August: Osage County as proof that “there are still great parts in Hollywood for Meryl
Streeps over 60” to Poehler’s crediting 12 Years a Slave for changing the way she feels about slavery.

They teased conspicuously-absent Woody Allen for winning the award “for the tiniest man with the biggest glasses,” since the similarly-diminutive and
power-framed Martin Scorcese had previously accepted the lifetime achievement accolade. Meanwhile, during the telecast, Woody’s son Ronan was busy tweeting
a reminder that his sister Dylan had recently gone public for the first time about her having been molested by their father at the age of 7.

As far as profanity, a few foul-mouthed winners had to be bleeped, although in the case of Jacqueline Bisset, the very busy NBC censors were too slow on
the button and let the S-word slip out over the airwaves. They also belatedly edited Fey’s raunchy suggestion “Like a supermodel’s vagina, let’s all give a
warm welcome to Leonardo DiCaprio,” although they apparently had no problem with her running joke about prosthetic penises.

But enough about this self-indulgent, alcohol-fueled preamble to the Academy Awards, it’s on to The Oscars!

Best Original Score: “All Is Lost”

Best Miniseries or Movie: “Behind the Candelabra”

Best Actor, Miniseries or Movie: Michael Douglas, “Behind the Candelabra”