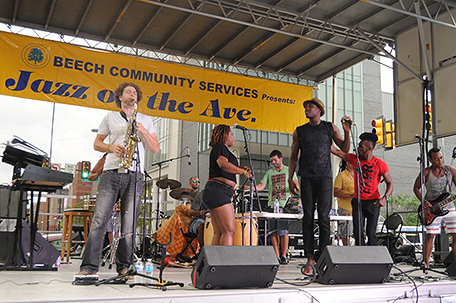 Music lovers in the Tri-State area can enjoy a variety of outstanding music Saturday, August 12 (rain date August 13), from noon to 8:30PM, at the 11th Annual “Jazz on the Ave” Music Festival. Sponsored by Beech Community Services, the free family event features live musical performances from some of the region’s top jazz and R&B artists. Philadelphia’s Cecil B. Moore Avenue will be transformed between Broad and 17th Streets with two stages, a variety of vendors and a Kids Zone.

“Thousands attend the festival each year,” explained Ken Scott, president/CEO of the Beech Companies. “It’s a great community event and an opportunity to celebrate the great musical history of Cecil B. Moore Avenue. Formerly named Columbia Avenue, and affectionately called the Golden Strip, the avenue was a famed destination for jazz entertainment during Philadelphia’s golden era of jazz from the 1940s through the early 1960s. We are continuing that tradition with our annual festival. Jazz on the Ave is one of our ways of giving back to the community. We have a powerful line-up of award-winning artists on the main stage, all with a Philly connection, that people will enjoy immensely.”

Grammy Award-winning singer/songwriter/multi-instrumentalist Tony Rich will step to the stage with a diverse musical style that mixes elements of jazz, rock and soul. In 1997, Rich won a Grammy award for Best Male R&B Album for his solo debut “Words.” The award-winning album also featured two Grammy-nominated singles, “Like a Woman” and “Nobody Knows.” That same year Rich, who has penned hits for Boyz II Men, Johnny Gill, TLC and Toni Braxton, entered the world of acting with his portrayal of Duke Ellington in the movie “Hoodlum.”

Grammy award nominee, singer/songwriter/producer Eric Roberson is described by some as the original pioneer of the independent movement in R&B/soul music. He has achieved major milestones from being a successful songwriter/producer for notable artists like Jill Scott, Musiq Soulchild, Dwele, Vivian Green and many others, to releasing nine albums under his Blue Erro Soul imprint. A Howard University grad, Roberson was nominated for a Grammy Award in the Best Urban/Alternative Performance category in 2010 and 2011. In 2013, the diverse artist joined United Tenors — a gospel group with Fred Hammond, Dave Hollister and Brian Courtney Wilson. Released in February 2016, Roberson’s “I Have A Song” was chosen as the fundraising single for the permanent installation of the first Commonwealth War Memorial in the U.K. to commemorate the contributions of African and Caribbean service men and women in both World Wars. Roberson’s latest project is a trilogy series entitled, “Earth, Wind & Fire.” “Earth” was released in April, and “Wind” is scheduled to be released in July.

Jazz/soul singer Frank McComb has often been compared to Stevie Wonder and Donny Hathaway. A keyboard artist, McComb was a house musician for Philadelphia International and toured with Teena Marie and Phillip Bailey. He also was a vocalist and producer for Branford Marsalis’ band Buckshot LeFonque, recording two albums with the group. His first independent album, The Truth, featured contributions from Billy Preston, Ledisi and percussion master Paulinho Da Costa. His release “Straight From the Vault,” a self-written, self-produced collection of vocal and instrumental compositions, released through his Boobescoot Music label, won the Soul Tracks “Readers’ Choice Awards” for Best Album in 2005.

Grammy-nominated neo-soul singer/songwriter Glenn Lewis began his recording career winning awards. His first single, The Thing to Do, earned a Juno Award nomination for Best R&B Recording. His second single, Bout Your Love, also won a Juno nomination. Lewis’ duet with Amel Larrieux on a cover of the Roberta Flack/Donny Hathaway classic Where Is the Love, was featured on Stanley Clarke’s 1, 2, To the Bass, and garnered a Grammy nomination for Best R&B Performance by a Duo or Group with Vocals in 2004.

Mozaic Flow is a Philadelphia-based band that encompasses diverse music genres from jazz, hip-hop, be-bop and blues, to go-go and rock & roll. They have opened for Macy Gray, The Roots, Wu Tang and Big Daddy Kane, and have performed at New York’s Blue Note, B.B. King Blues Club, Brooklyn Bowl, the Kimmel Center, the Clef Club of Jazz and a host of legendary clubs and festivals. Mozaic Flow won the award for Best Live Band at the 2014 Philly Hip Hop Awards. Their live single Hip Bop Movement includes Dice Raw and Tuba Gooding Jr. from the Roots Crew, as well as a guest verse from Dotcomm.

The entire line-up will be held together by Jeff Bradshaw & Friends, the North Philadelphia born and bred soul/jazz innovator who has changed the way people view the trombone. Bradshaw honed his musical chops in his North Philadelphia church, United House of Prayer for All People and the Clef Club of Jazz Youth Band. In 2012, he released his sophomore double CD, “Bone Appetit” which debuted on the Billboard contemporary jazz charts three times in the Top 25, and twice in the Top 10 as high as #3. The CD was also nominated for a NAACP Image Award for Best Jazz Album. In 2014, he released “Home,” the first album recorded live at Philly’s Kimmel Center by an African-American. Never one to forget from whence he came, Bradshaw and his musical friends perform each year at “Jazz on the Ave” and takes the audience on a soulful, jazzy adventure!

“I love the diversity of this event,” said Christine Brown, director of Beech Community Services and the festival. “The festival draws thousands of people of diverse backgrounds from throughout the tri-state area. We all come together on Cecil B. Moore Avenue to celebrate jazz and other great music genres. It’s a humbling experience and will motivate us to continue producing this festival for the next 10 years and beyond. Beech Community Services continues to play a major role in the area’s revitalization by bringing social, educational and community services to the area.”