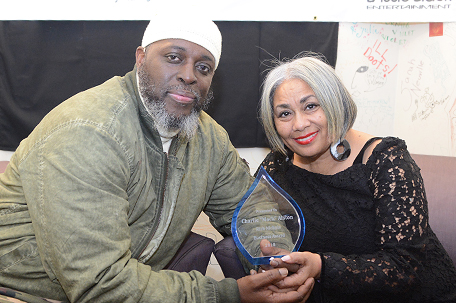 Darrell Robinson Jr. and Adam Blackstone held their 10th annual “Thanksgiving Tribute and Celebration” at World Café Live on Nov. 20. Each year, this event pays homage to music industry trailblazers while also supporting the “Next Generation” scholarship, which helps provide music education and instruments for youth.

The evening of feel-good music and vibes was hosted by multitalented singer-songwriter Eric Roberson and featured live performances from the house band, “The OriGin”, which featured Blackstone, Robinson Jr., Johnnie “Smurf” Smith, Dwayne Moore, Aaron Draper and Rayfield “Ray Ray” Holloman. This incredible collective of musicians has played with some of the greatest names in music including: Janet Jackson, Rihanna, Lauryn Hill, Common, Pharrell, Maroon 5 and more. 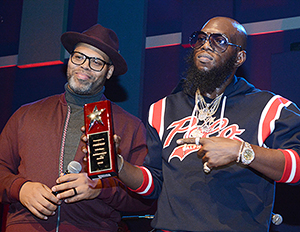 This year’s tribute honored Charlie Mack, Freeway, Brent Celek and Derrick Hodges. The SUN spoke with some of the special guests and honorees at the event.

Former Philadelphia Eagles tight end Brent Celek spent his career in Philadelphia giving back to the community. Celek often volunteers with “Make The World Better”, a non-profit organization founded by former Eagles player Connor Barwin that rehabs local parks in Philadelphia in an effort to give the youth safe spaces to play outdoors.

Celek spoke about the importance of supporting the Thanksgiving Tribute.

“I think that whether you’re an artist, athlete or someone that has been able to succeed in your career… if there’s an opportunity to give back, I think it’s only right”, Celek said. “I think it’s awesome that Adam and Darrell use their platform to inspire young kids that want to do the same things as them. I think they do a great job of it and I’m happy to support. I tell people all the time, this community has given me everything I have today and so to give back, it only seems right.”

Former Eagle wide receiver Jason Avant was also in attendance. As a devoted contributor to children’s charity organizations like Alex’s Lemonade Stand and longtime friend of Darrell Robinson Jr., Avant explained why he chose to support this initiative.

“Darrell said, ‘I have this program that highlights kids’ talent, but we also give scholarships for music and we give back during Thanksgiving,’” Avant said.  “I said ‘you know what… I want to come out, support my community, and make sure they have a good representation from the Eagles and Launch Trampoline Park.’” 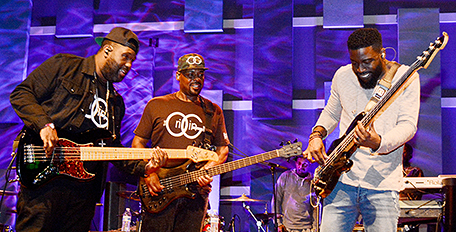 Philadelphia Platinum recording artist Freeway was present to be honored for his dedication to the city. Freeway, who is currently on the “Now or Never” tour with State Property, also performed songs from his new album “Think Free”, which is available on all music platforms. Freeway spoke about being honored and the importance of giving back.

Charlie Mack — manager, film producer and entrepreneur —  was also present to receive his honor. He credits his Uncle Nelson and Kenny Gamble after attending a “Clean Up The Ghetto” event in 1976 with inspiring him to make his life matter. Successful in his efforts, Charlie Mack has become a fixture both locally and nationally for his contributions. He spoke about receiving the honor. 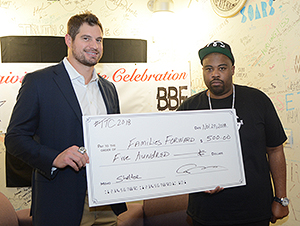 “It is always overwhelming for someone to honor you”, he said. “It’s been happening for some time now, but I still haven’t gotten used to it because there’s so much more work to do. In terms of the way I see my life… I haven’t even scratched the surface. I feel honored to be honored, but I also feel like I have to get busy. There’s a lot of work to be done and a short time to do it.”

Although Charlie Mack has accomplished a great deal, he was adamant about acknowledging the reach Philadelphia musicians have had on the entire music sphere.

“Everybody that’s out in this entertainment world has to have someone intricately involved in their career from Philadelphia,” he said. “These guys “The OriGin”, are MDs (musical directors) for Justin Timberlake, Jay-Z, Common, Erykah Badu and Beck, and they’re home grown from Philadelphia. I always say Philadelphia… we add the flavor.”

The work and dedication Adam Blackstone and Darrell Robinson Jr. continue to offer to the Philadelphia community is greatly appreciated. Visit https://familiesforwardphilly.org/ to support their efforts by making a donation. Be sure to follow @shedphilly and @theoriginband on Instagram for more updates and details.