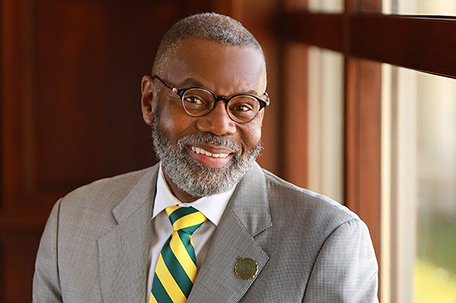 (RNS) — There are usually lots of cheers and applause at university commencements.

But 2020 and 2021 graduates of Wilberforce University, a school affiliated with the African Methodist Episcopal Church, had an extra reason to celebrate during their ceremony on Saturday (May 29) in Wilberforce, Ohio.

Their president announced that any debts they still owed to the historically Black university had been forgiven.

“Because you have shown that you are capable of doing work under difficult circumstances, because you represent the best of your generation, we wish to give you a fresh start,” said President Elfred Anthony Pinkard. “So therefore the Wilberforce University board of trustees has authorized me to forgive any debt. Your accounts have been cleared and you don’t owe Wilberforce anything. Congratulations.”

As soon as Pinkard said the words “forgive any debt,” the masked students started screaming, shouting and jumping, prompting him to smile and laugh before he continued his surprise announcement, which was streamed live on Wilberforce’s YouTube channel.

When he added “accounts have been cleared” there were more cheers, jumps and hand-waving among the black-robed students wearing green and gold stoles.

In a statement on the university’s website, the school said the amount of debt forgiveness for both classes totals more than $375,000 for the 166 new alumni.

It said the “zero balance” was the result of scholarships from the United Negro College Fund Inc., Jack and Jill Inc. and other institutions that aided students in the spring and fall semesters of 2020 and the spring of 2021.

It noted all student also benefited from the Higher Education Emergency Relief Fund established through the CARES Act. In particular, that financial assistance had previously helped the students whose balances due to the school would have prevented them from registering for their fall classes in 2020.

One student spoke of the difference the debt forgiveness will make for him in the years ahead.

“I couldn’t believe it when he said it,” Rodman Allen, now a 2021 alumnus, said in a statement. ”It’s a blessing. I know God will be with me. I’m not worried. I can use that money and invest it into my future.”

Wilberforce, the oldest private historically Black school operated and owned by African Americans, was founded in 1856.