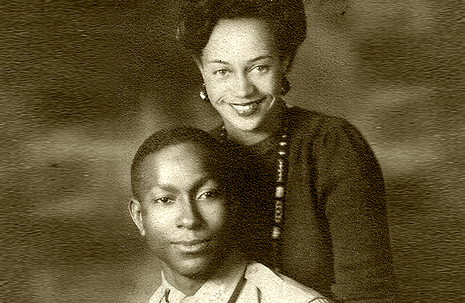 
“My father was a pilot with the all-Negro Tuskegee Airmen; my mother a steno-typist… Separated by war and duty, they shared the events of their lives
through letters. They wrote about their joys, their dreams and their individual struggles.


Thankfully, each preserved their letters…. This collection is a glimpse of their lives between 1942 and 1956… These letters are my parents’ legacy.
They tell about a difficult but wondrous journey filled with obstacles and opportunities… [and] remind us that all young Americans begin their lives
with dreams.”

— Excerpted from the Introduction (pg. 5)

If you saw the recent World War II film Red Tails, you were treated to a riveting reenactment of the heroic exploits of the Tuskegee Airmen over the skies
of Europe. But a glaring omission from the movie was any mention of the African-American pilots’ pining for their loved ones back in the States.

In fact, the only romance featured in the film revolved around an ill-fated, interracial liaison between an airman and a local girl he met while stationed
in Italy. For that reason, a book like Tuskegee Love Letters couldn’t have come along at a more timely moment.

This bittersweet memoir is essentially conceived as a play constructed from the notes which Bernard and Luana Knighten exchanged by mail while he was
serving his country as a member of the Tuskegee Airmen. The passages were culled by their daughter, Kim, from a collection of over 400 missives she found
after her father passed away in 2000 at the age of 79.

The initial entries were written when the Knightens were still newlyweds in the full bloom of youth, and exhibiting an endearing combination of bravado,
exuberance and vulnerability. Though their subjects of conversation ranged from safety to racism to ambitious plans for making their mark on the world upon
reuniting, every message invariably included a passionate reaffirmation of their love.

For instance, Luana signs one note with a heartfelt, “Please, please, please be careful and come back to me,” well aware that some members of her hubby’s
squadron had already perished in action. Bernard, in turn was just as ardent, not only naming his plane after his wife, but admitting that “I dream of you
all night long.”

He also describes his reaction to Nazi POWs ‘enjoying better accommodations than black GIs. “It is really disgusting. It makes my blood boil to see how
nice they treat the German prisoners… It really hurts.” But discrimination didn’t discourage him after the war from publishing with the help of “a
talented young writer named Alex Haley” the debut issue of Essence Magazine, a short-lived precursor of the popular periodical for black females.

Meanwhile, equally-talented Luana started pursuing her acting career, only to die of a heart attack two days before she was set to make her Broadway debut
co-starring in Take a Giant Step opposite a teenager named Lou Gossett, Jr. Because Kim was only a couple months-old at the time, she never really got to
know her mother.

That makes her all the more grateful to her parents for having the inclination to save their intimate love letters and to her long-widowed dad for
preserving them for posterity, knowing just how much they might mean to his darling daughter the day she discovered them in a dusty trunk in the attic
after he was no longer around. A priceless slice of African-American history that can’t be read without crying and which undoubtedly deserves to be on
display in the Smithsonian.

To order a copy of Tuskegee Love Letters, visit here.