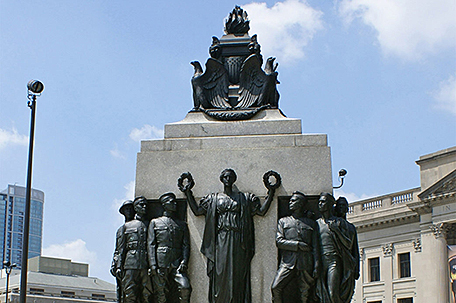 In a formal sense, the modern Memorial Day originated with an order issued in 1868 by Maj. Gen. John A. Logan, the commander in chief of the Grand Army of the Republic, for the annual decoration of war graves.

Three years after the Civil War ended, on May 5, 1868, the head of an organization of Union veterans — the Grand Army of the Republic (GAR) — established Decoration Day as a time for the nation to decorate the graves of the war dead with flowers. Maj. Gen. John A. Logan declared that Decoration Day should be observed on May 30. It is believed that date was chosen because flowers would be in bloom all over the country.

The first large observance was held that year at Arlington National Cemetery, across the Potomac River from Washington, D.C.

The ceremonies centered around the mourning-draped veranda of the Arlington mansion, once the home of Gen. Robert E. Lee. Various Washington officials, including Gen. and Mrs. Ulysses S. Grant, presided over the ceremonies. After speeches, children from the Soldiers’ and Sailors’ Orphan Home and members of the GAR made their way through the cemetery, strewing flowers on both Union and Confederate graves, reciting prayers and singing hymns.

In a literal sense, it was not until 1971 that Memorial Day was established as a federal holiday by Congress. Regardless of when Decoration Day (or Memorial Day) may have been officially established, though, debate continues to this day regarding exactly when and where the first observance of this nature was held in the United States. In May 1966, the city of Waterloo, New York, was designated as the “Birthplace of Memorial Day” via a Congressional resolutions and presidential proclamation commemorating a patriotic observance held in that town one hundred years earlier.

The story of this Memorial Day observance began in the summer of 1865, when a prominent local druggist, Henry C. Welles, mentioned to some of his friends at a social gathering that while praising the living veterans of the Civil War it would be well to remember the patriotic dead by placing flowers on their graves. Nothing resulted from this suggestion until he advanced the idea again the following spring to Gen. John B. Murray. Murray, a civil war hero and intensely patriotic, supported the idea wholeheartedly and marshalled veterans’ support. Plans were developed for a more complete celebration by a local citizens’ committee headed by Welles and Murray.

On May 5, 1866, the Village was decorated with flags at half mast, draped with evergreens and mourning black. Veterans, civic societies and residents, led by Gen. Murray, marched to the strains of martial music to the three village cemeteries. There impressive ceremonies were held and soldiers’ graves decorated. One year later, on May 5, 1867, the ceremonies were repeated. In 1868, Waterloo joined with other communities in holding their observance on May 30th, in accordance with General Logan’s orders. It has been held annually ever since.

Waterloo held the first formal, village wide, annual observance of a day dedicated to honoring the war dead. On March 7, 1966, the State of New York recognized Waterloo by a proclamation signed by Gov. Nelson A. Rockefeller. This was followed by recognition from Congress of the United States when the House of Representatives and the Senate unanimously passed “House Concurrent Resolution 587 on May 17 and May 19, 1966” respectively. This reads in part as follows: “Resolved that the Congress of the United States, in recognition of the patriotic tradition set in motion one hundred years ago in the Village of Waterloo, NY, does hereby officially recognize Waterloo, New York as the birthplace of Memorial Day …”

On May 26, 1966, President Lyndon B. Johnson, signed a Presidential Proclamation recognizing Waterloo as the Birthplace of Memorial Day.

In his book “Race and Reunion: The Civil War in American Memory,” Professor David W. Blight made the case for Charleston, South Carolina, as Memorial Day’s birthplace, as that city was the site of an obscure (possibly suppressed) May 1865 event held at a racetrack turned war prison, during which freedmen properly reburied hundreds of Union dead found there and then held a ceremony to dedicate the cemetery:  African Americans founded Decoration Day at the graveyard of 257 Union soldiers labeled “Martyrs of the Race Course,” May 1, 1865, Charleston, South Carolina.

The “First Decoration Day,” as this event came to be recognized in some circles in the North, involved an estimated 10,000 people, most of them Black former slaves. During April, 28 Black men from one of the local churches built a suitable enclosure for the burial ground at the Race Course. In some 10 days, they constructed a fence 10-feet-high, enclosing the burial ground, and landscaped the graves into neat rows. The wooden fence was whitewashed and an archway was built over the gate to the enclosure. On the arch, painted in Black letters, the workmen inscribed “Martyrs of the Race Course.”

At nine o’clock in the morning on May 1, the procession to this special cemetery began as 3,000 Black schoolchildren (newly enrolled in freedmen’s schools) marched around the Race Course, each with an armload of roses and singing “John Brown’s Body.” The children were followed by 300 Black women representing the Patriotic Association, a group organized to distribute clothing and other goods among the freedpeople. The women carried baskets of flowers, wreaths, and crosses to the burial ground. The Mutual Aid Society, a benevolent association of Black men, next marched in cadence around the track and into the cemetery, followed by large crowds of white and Black citizens.

All dropped their spring blossoms on the graves in a scene recorded by a newspaper correspondent: “when all had left, the holy mounds — the tops, the sides, and the spaces between them — were one mass of flowers, not a speck of earth could be seen; and as the breeze wafted the sweet perfumes from them, outside and beyond … there were few eyes among those who knew the meaning of the ceremony that were not dim with tears of joy.” While the adults marched around the graves, the children were gathered in a nearby grove, where they sang “America,” “We’ll Rally Round the Flag,” and “The Star-Spangled Banner.”

The official dedication ceremony was conducted by the ministers of all the Black churches in Charleston. With prayer, the reading of biblical passages, and the singing of spirituals, Black Charlestonians gave birth to an American tradition. In so doing, they declared the meaning of the war in the most public way possible — by their labor, their words, their songs, and their solemn parade of roses, lilacs, and marching feet on the old planters’ Race Course.

After the dedication, the crowds gathered at the Race Course grandstand to hear some thirty speeches by Union officers, local Black ministers, and abolitionist missionaries. Picnics ensued around the grounds, and in the afternoon, a full brigade of Union infantry, including Colored Troops, marched in double column around the martyrs’ graves and held a drill on the infield of the Race Course. The war was over, and Memorial Day had been founded by African Americans in a ritual of remembrance and consecration.

Although contemporaneous accounts from the Charleston Daily Courier describe and document the 1865 ceremony that took place there, and the event was one the earliest known observances similar to what we would now recognize as Memorial Day, whether it was truly the first such ceremony, and what influence (if any) it might have had on later observances, are still matters of contention. Professor Blight termed it “the first Memorial Day” because it predated most of the other contenders, but he noted he has no evidence that it led to Gen. Logan’s call for a national holiday in 1868: “I’m much more interested in the meaning that’s being conveyed in that incredible ritual than who’s first,” he said.

In their 2014 book The Genesis of the Memorial Day Holiday, Dr. Richard Gardiner and Daniel Bellware concluded that credit for the origins of Memorial Day should likely rest with a group of women in Columbus, Georgia known as the Ladies Memorial Association, who beginning in 1866 held an annual observance originally called “Memorial Day,” then subsequently referred to as “Confederate Memorial Day” after (as referenced above) northerners co-opted the event in 1868 and established their own Memorial Day.