The Little School That Does 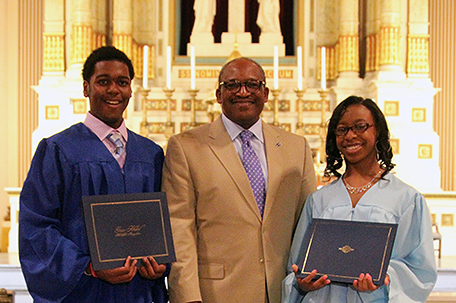 It’s a safe bet that most of us didn’t know where we wanted to go to college when we were 9-years-old.

But then again, Bria Hawkins isn’t most people.

When she was in the third grade at the Gesu School in North Philadelphia, her teachers took her and the rest of the class on a field trip to the Barnes Foundation when it was still located in Lower Merion.

“I was asked to write a speech about the visit to the Barnes and it’s impact,” Hawkins said. “I wrote the speech, my Mom had me memorize it, and I gave it at a gala.”

Among the people impressed by Hawkins’ speech was Fr. Timothy Lannon, SJ, President of St. Joseph’s University. That official then offered the 9-year-old a scholarship to the university, from which she graduated in May.

But it all started at the Gesu School, where she was academically challenged while working with teachers who take their work home.

“Your teachers work with you from Kindergarten to middle school,” Hawkins said. “They really get to know you and they know what you’re capable of doing. They’ll call you out on it if they think you’re not working up to your potential, but they also know that not everyone has the best home life. If they know you have a problem, they’ll try to help.”

For the last 22 years, the Gesu School has served North Philadelphia as an independent Catholic K-8 school and has educated scores of the neighborhood’s children. It became an independent school when the Gesu parish, a cornerstone of the North Philadelphia community, closed in 1993. Because the Jesuits and the sisters of the Immaculate Heart of Mary recognized the hole that would be left in the community if the school also closed, they asked the Archidiocese of Philadelphia to allow them to keep it open, said Bryan Carter, the school’s president.

Serving a six-zip code area of North Philadelphia that includes three of the most impoverished zip codes in the City of Philadelphia, the Gesu School provides its students the kind of parochial education most wouldn’t be able to afford otherwise, Carter said.

Students are admitted on a first come, first serve basis, tuition is paid on a sliding scale with 25 percent of the students coming from homes where the family income is $20,000 or less.

Because it’s an independent school, Gesu has to come up with the money it uses to educate the children it serves on its own. Volunteers and alumni help with that process, with some deciding to pay the tuition of a Gesu student as a sponsorship.

That’s the route that Keith McClain, a member of Gesu’s board of trustees, has taken with one of the school’s students. As a child growing up in North Philadelphia, McClain was a student at Gesu, a place his mother liked because it provided structure for him.

McClain, who went on to attend the St. Joseph’s Preparatory School across the street and is currently the head of Executive Compensation for New York Life, believes in the school and what it can do for students. 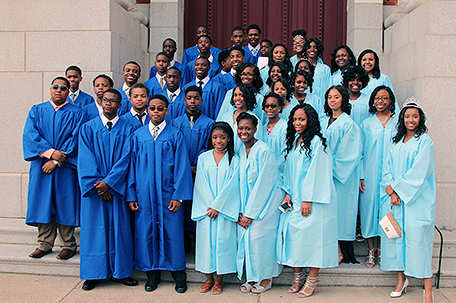 “The teachers and staff set the school apart,” McClain said. “They pushed me and believed in me. Going to Gesu was a fantastic time for me and I still keep in touch with the cohort of students I went to school with. It’s like a family.”

Most importantly, Carter said, the students that come to Gesu are given the chance to prove themselves from the moment they step in the door, he said.

“To get into the school, students don’t have to take a test,” Carter said. “But if they have problems, we get them caught up. Then, they go on to soar.”

Students are placed into same-sex classrooms and there is leadership that cares for the whole child, Carter said. In addition to the academic program, the school’s budget, which is raised through the efforts of the school’s volunteers and alumni, also provides art, music, ballet and ballroom dancing classes, he said.

For many of the students, going to the Gesu School continues a family tradition. When Niema Smart was looking for a place to send her son, Jafar Thomas, she was looking at another Catholic school.

But her aunt, who had attended the school, recommended that she look into sending Jafar to her alma mater, Gesu.

“It was the best decision I’ve ever made,” Smart said. “I know that he got a good education here and I always recommend it to everyone.”

Priest to be presented with Gesu Spirit Medal