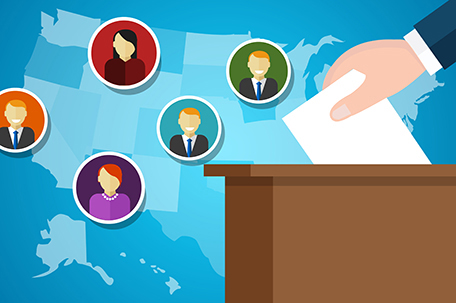 With the general election approaching and many wondering if their votes will matter, I’ve decided to try and explain the Electoral College in as simple terms as possible. The Electoral College is made up of 538 electors. The number of electors each state gets is the same as the number of members it has in its Congressional delegation — one for each member of the House of Representatives, plus two Senators — and the District of Columbia gets three.

The number of electors each state gets allotted in the Electoral College changes every 10 years due to a combination of Census numbers and the Congressional redistricting that always accompanies it. States gain or lose more electoral votes based on the Census, which is why it’s important for everyone to complete their Census questionnaires on many levels.

While the citizens of the United States vote in November for who they think should be president, the people who comprise the Electoral College actually decide who the president will be when they meet in mid-December

Each state gets three electoral votes to start with and the more populous the state, the more votes it gets. California, for example, has 55 electoral college votes.

The people or the popular vote, should be a signal to the Electoral College how they should vote, but it doesn’t always follow the will of the people, especially if the margin between the two candidates in that state is small.

It is why Hillary Clinton won the 2016 election with the popular vote by over 3 million, but lost the election as electors in some states simply refused to cast their votes in her favor. The State of Florida has 29 Electoral College votes and it’s considered a “swing state” because they give all their votes to the person that wins the popular vote even by a slim margin.

What happens then to the 11 million Americans who do not live in the United States? While there are 600,000 people living in the District of Columbia, it was determined to not be a state so that the capital of the country could be free of political influence. In 1964, the residents of DC won the right to three electoral votes through a constitutional amendment that gives them the same amount of votes as the least populous state, Wyoming, which also has three votes.

The territories like Guam, the US Virgin Islands and Puerto Rico get no Electoral College votes because they are territories, which means that while their citizens are technically residents of the United States, they live in territories, which are self-governing. About 4.4 million citizens live in these territories; more than the populations of Vermont, North Dakota, South Dakota, Alaska, and Delaware combined.

Then, there are the 6.3 million Americans who live abroad. If you are a citizen who moved to a foreign country, you can send an absentee ballot to the last state you lived in. But, if you move within the United States to one of its territories like Puerto Rico, you lose your right to vote for president if you live there. However, American astronauts can vote from space.

Citizens are voting on Election Day for a group of electors appointed by the political parties who are then charged to choose the president and vice president on the citizen’s behalf. While the electors “promise” to vote as their citizens want in their states, they are not required to do so. Electors are free to vote the way they want. Eighty-seven times, electors have voted against the way their people wanted them to and here is the kicker: these 538 people are essentially unknown to the citizens of the United States.

All of what I described was designed in 1787 by men who fought to ratify the Constitution fairly in Philadelphia at their convention because information moved slowly back then and the country was so big, the idea was to send these representatives to Washington to decide, and allow the states with fewer  residents to have a voice as well.

Information now moves at the speed of light, but things continue this way, despite the many times it has been challenged over the years.

So again, people vote for the electors, who then vote for president and vice president in early December.  A handful of states will determine the winner, like Pennsylvania and Michigan.

In 2000,  George W. Bush won the electoral election by five electoral votes even as Al Gore won the popular vote. The Electoral College has been around for over 200 years with the hope that the smaller states would not be ignored by candidates running for office.

Forty-eight states have a winner takes all system while two states do not. Those two states — Maine and Nebraska — can split their Electoral College votes between candidates. Electors are chosen in one of two ways: nominees are chosen before the elections by political parties as a reward for their support and some electors are chosen by the voters themselves during the general elections, which is why reading everything on your ballot carefully is imperative.

The Electoral College has been credited for a peaceful transference of power for more than 200 years, which has led to an extremely stable government.

Opponents of the Electoral College say the system is unfair because it has elected second-place candidates and three out of four states are left to be spectators in a presidential election despite casting their popular vote. The Supreme Court said in January 2020 that it would review two separate cases in Washington and Colorado of electors who refused to vote for Hillary Clinton even as she won the popular vote in their states in 2016.

In Washington, three electors voted for Colin Powell and were fined $1,000 each. In Colorado, a member of the Electoral College tried to vote for John Kasich, while two others refused to vote for Clinton. Those two members eventually backed down while the Kasich voter was replaced.

The Supreme Court ruling may change the way the Electoral College votes, so we wait.  There is a hope that states will move to a system by the 2024 elections where the popular vote wins the presidential elections. However, for Tuesday’s election, the process remains the same.